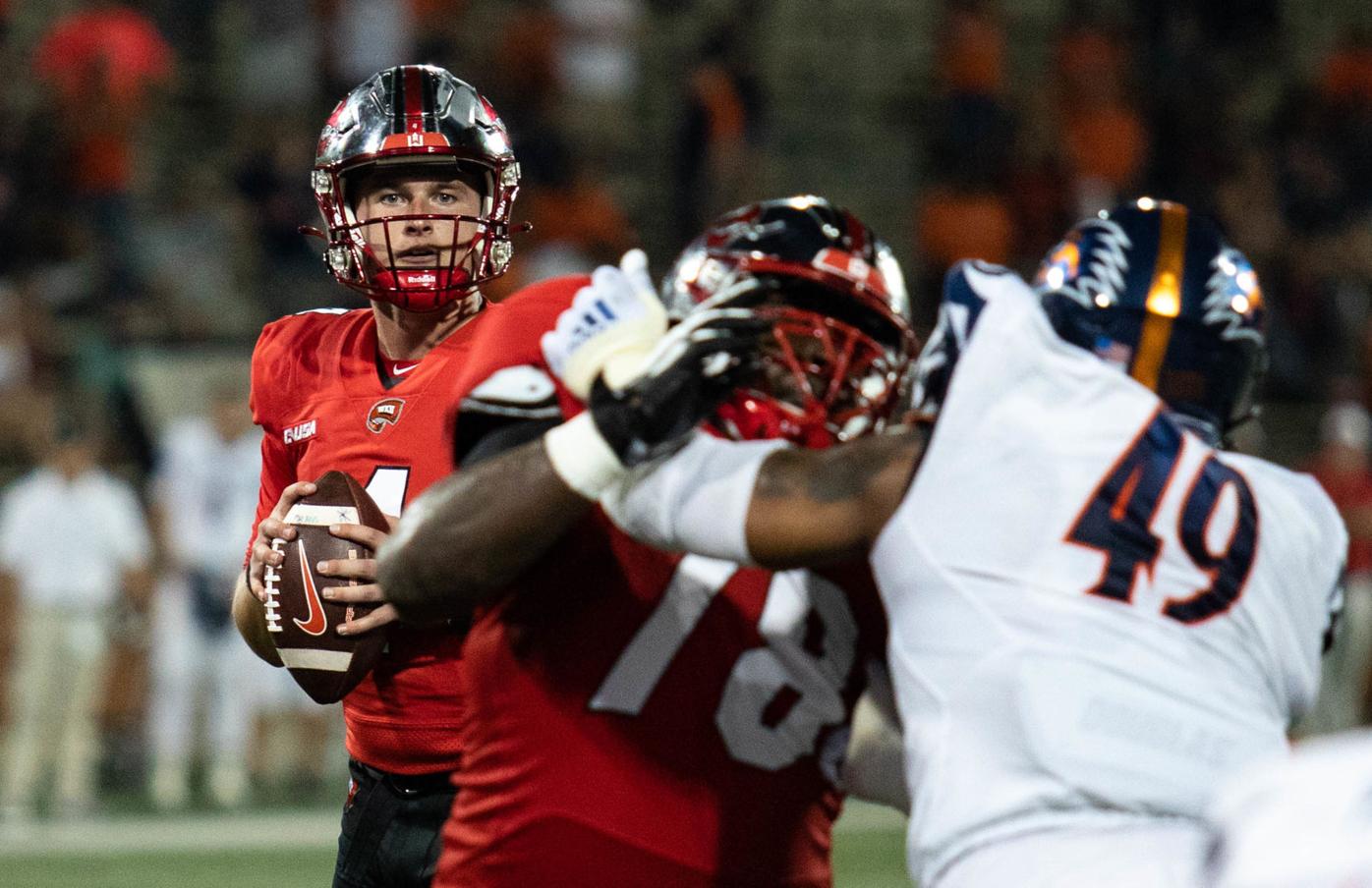 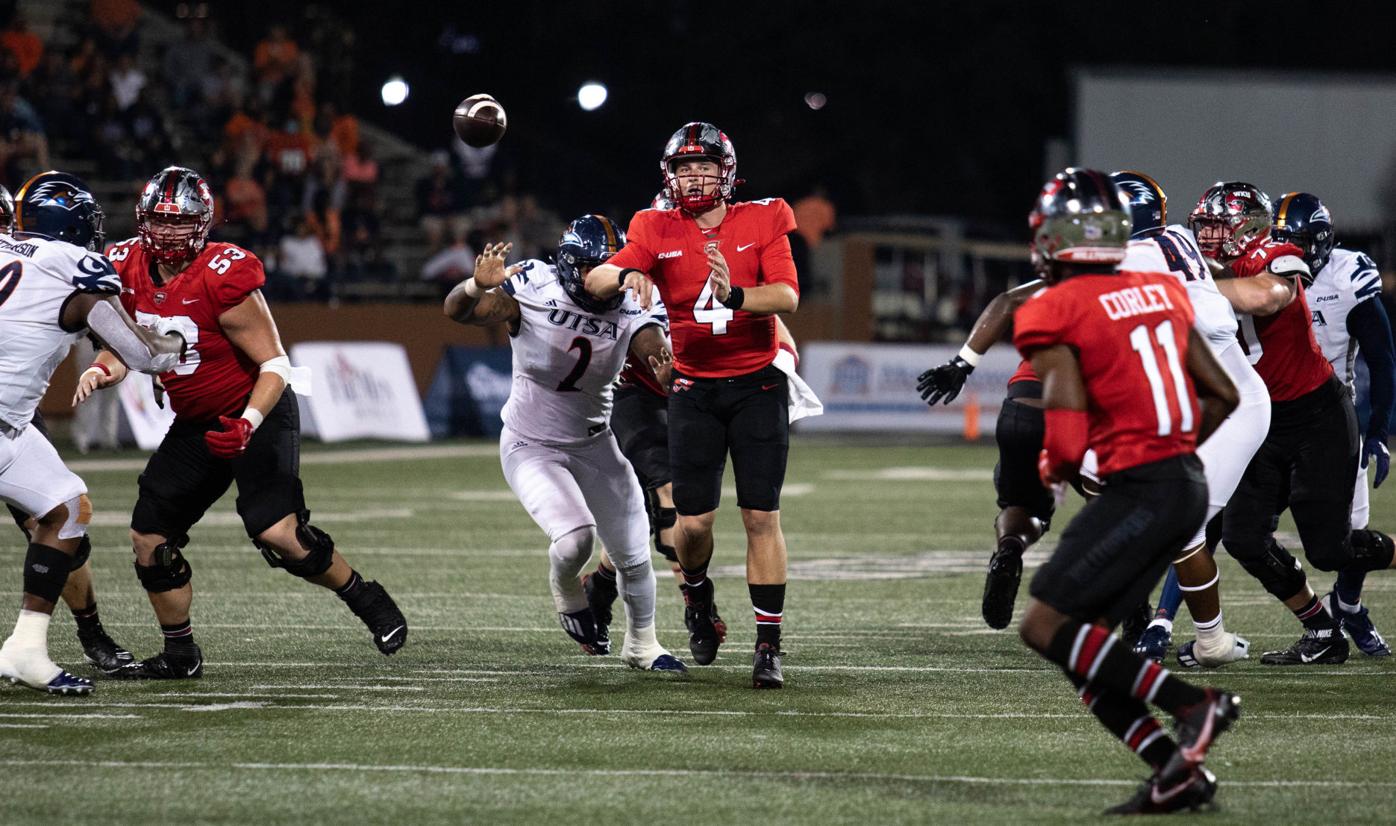 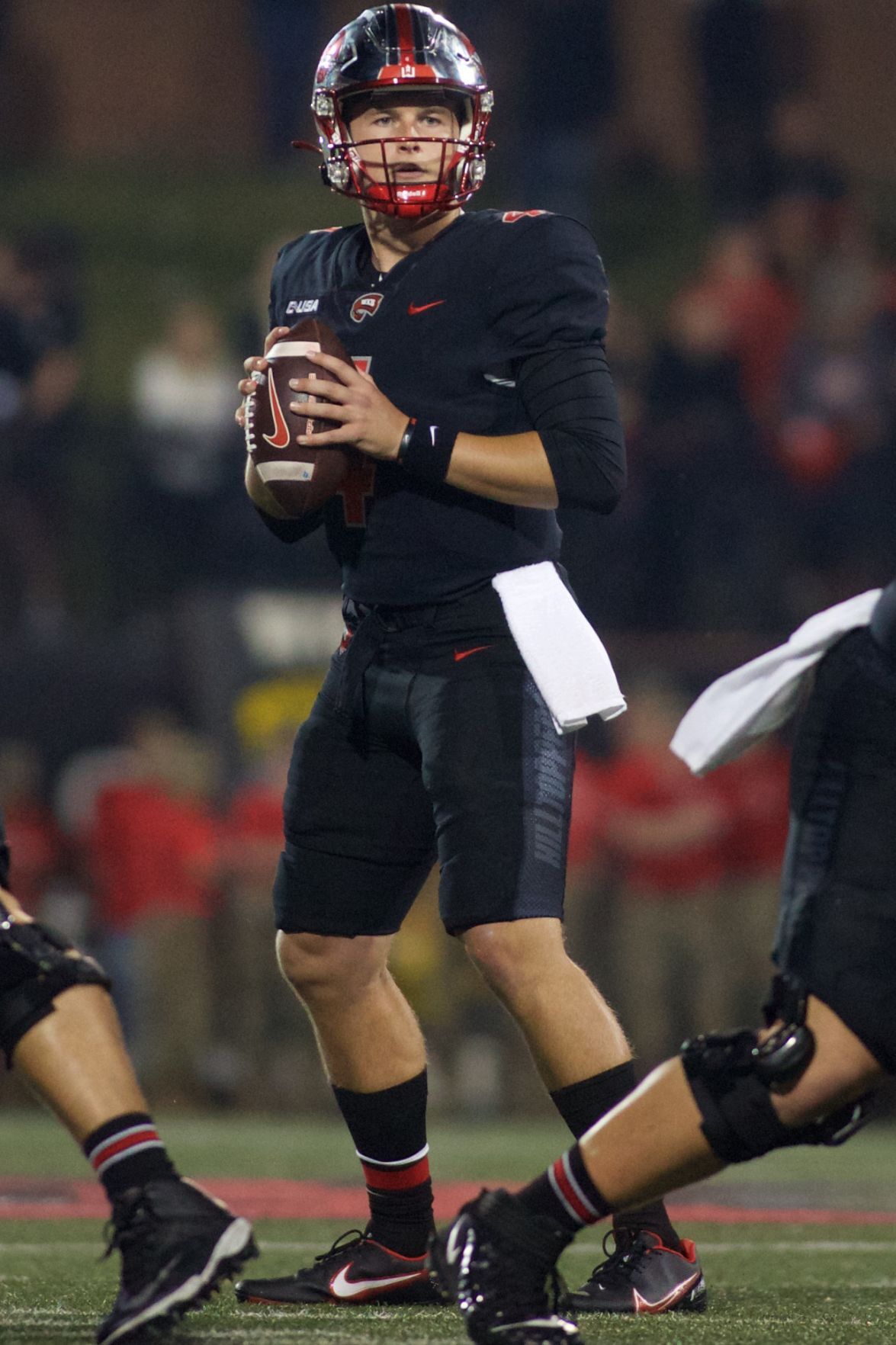 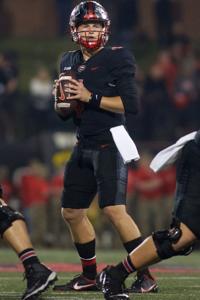 Bailey Zappe has quickly worked his way into Western Kentucky’s record book in his first five games with the team, and when asked how he stacks up against some of the program’s top quarterbacks, head coach Tyson Helton had high praise.

And he took it a step further.

“He’s the best one I’ve ever been around,” Helton said Monday at his weekly news conference. “And that includes Sam Darnold.”

Helton is in his third seasons as WKU’s head coach, but also served as offensive coordinator/quarterbacks coach with the Hilltoppers in 2014-15 when players like Brandon Doughty and Mike White were around, and he also had stints at Power Five programs USC and Tennessee before returning to Bowling Green.

Helton’s comments came after another big game from the transfer quarterback from Houston Baptist in a 52-46 loss to UTSA that’s helped increase his national attention this fall.

“It’s awesome to hear that coming from him,” Zappe said Tuesday after practice. “I mean, Sam Darnold’s a great quarterback. When he said it I’m like, ‘Uhh, I mean, Sam Darnold is also playing for the Panthers and he’s a stud,’ so it’s awesome. I appreciate it a lot.”

“He is a guy that when he’s out on the field, everybody knows he’s going to give us a chance to go make it happen, and he elevates the play of everybody. That’s the biggest thing. He takes the demeanor like a coach, he’s in the office at 7 a.m., he’s there all day, he doesn’t leave until we leave and you don’t find guys like that. That’s a generational quarterback, in my opinion. Not to put pressure on him, but we’ve been in five games and I can see what the guy can do. He’ll continue to do those things. He’s the best I’ve been around.”

It’s high praise coming from Helton, who said Aug. 3 on the team’s media day Zappe’s demeanor reminded him of Darnold – Helton was the passing game coordinator/quarterbacks coach at USC while Darnold was there. Darnold was selected as the No. 3 overall pick in the 2018 NFL Draft and is currently a starting quarterback in the NFL with the Carolina Panthers.

“I love Sam Darnold and he’s going to have a great career in the National Football League,” Helton said. “If Sam Darnold was sitting here and he watched Bailey Zappe, he would say, ‘I wish I played like Bailey Zappe in college.’ “

Because of his play this season, the attention around Zappe has started to rise. In the last two weeks, he’s been named to the Davey O’Brien Award Watch List and the Maxwell Award Watch List. He’s twice been included in Conference USA’s Offensive Player of the Week honors. He’s played in front of scouts – in addition to a record crowd at Houchens-Smith Stadium for WKU’s game against Indiana, there were five NFL scouts, as well as two all-star game scouts, for example – and some national analysts are including Zappe among the best in the country. For example, in an Oct. 11 article by ESPN, college football reporter Tom VanHaaren included Zappe as one of three players that would be at the top of his Heisman Trophy Award list.

There wasn’t as much hype around the quarterback nationally entering the year because of where he was at before, despite putting up similar numbers.

The Hilltoppers hired Zach Kittley from Houston Baptist as their new offensive coordinator after a 5-6 regular-season in 2020, and after WKU lost to Georgia State in the LendingTree Bowl to end a disappointing fall, Zappe gave the Hilltopper fanbase hope for the future by announcing his signing a day later.

He was coming off a shortened season with the Huskies where he threw for 1,833 yards and 15 touchdowns with only one interception on 141-of-215 passing, and entered the season as college football’s career passing leader with 10,004 yards from 2017-20 at Houston Baptist. He still leads the nation with 12,239 career passing yards – over 1,000 more than Eastern Washington’s Eric Barriere, who sits in second with 11,200.

Three of Houston Baptist’s four games last season were against FBS opponents despite the Huskies’ FCS standing, and in total, Zappe has played 10 games against FBS foes, with just two coming at home. In those games, he’s thrown for 3,989 yards and 30 touchdowns on 324-of-497 passing (65.2%) with just four interceptions.

“Couldn’t be more proud to be his coach going on year four now,” Kittley said Tuesday after practice. “I’m not surprised one bit. I’ve known him for four years. I knew he was going to come here and do what he’s doing because there’s not many guys that work as hard as he does and takes the game as seriously.

“ ... Unfortunately we played in a little smaller market there at Houston Baptist and so some of that national praise wasn’t going to be there for him. As soon as we got here there was never a shadow of doubt that was going to happen to him. He’s earned every bit of it and I’m hoping he continues to stay on the track he’s on.”

He didn’t waste much time in including his name with the WKU greats, either.

In his first game for WKU, Zappe broke the program’s single-game record for passing touchdowns at Houchens-Smith Stadium with seven in a 59-21 victory over UT Martin before matching it Saturday against the Roadrunners. He has four of the top 15 passing yard games in program history, with his best being the 523 yards he passed for Saturday, which ranks third on WKU’s single-game list. His 46 completions the week before in a loss at Michigan State tied the WKU all-time record set by Doughty in 2014 against Bowling Green. Zappe’s one interception Saturday was on his final pass attempt when WKU was trying to win the game late, breaking his streak of 203 pass attempts without one, which ranks second behind Tyrrell Pigrome’s 279 last year – Pigrome’s first interception came in the bowl loss.

Despite his productive offensive numbers, Zappe’s teams haven’t seen much success with their records. Houston Baptist went just 8-30 from 2017-20, and the Hilltoppers are just 1-4 this fall.

WKU is scheduled to travel to Old Dominion for a 2:30 p.m. CT game Saturday, and the most important number Zappe is trying to bump up is the team’s wins.

“Of course every player looks at (records), but I try not to get caught up into it,” Zappe said. “I’d trade all of that to change our record to 4-1 instead of 1-4. I don’t care if I throw 100 yards – as long as we get the win, I’m happy. To be in that conversation with Doughty and Mike White and those guys, it’s awesome, but we’ve got a lot of work to do. We’ve still got hopefully nine more games, so we’re looking forward to that.”{&end}