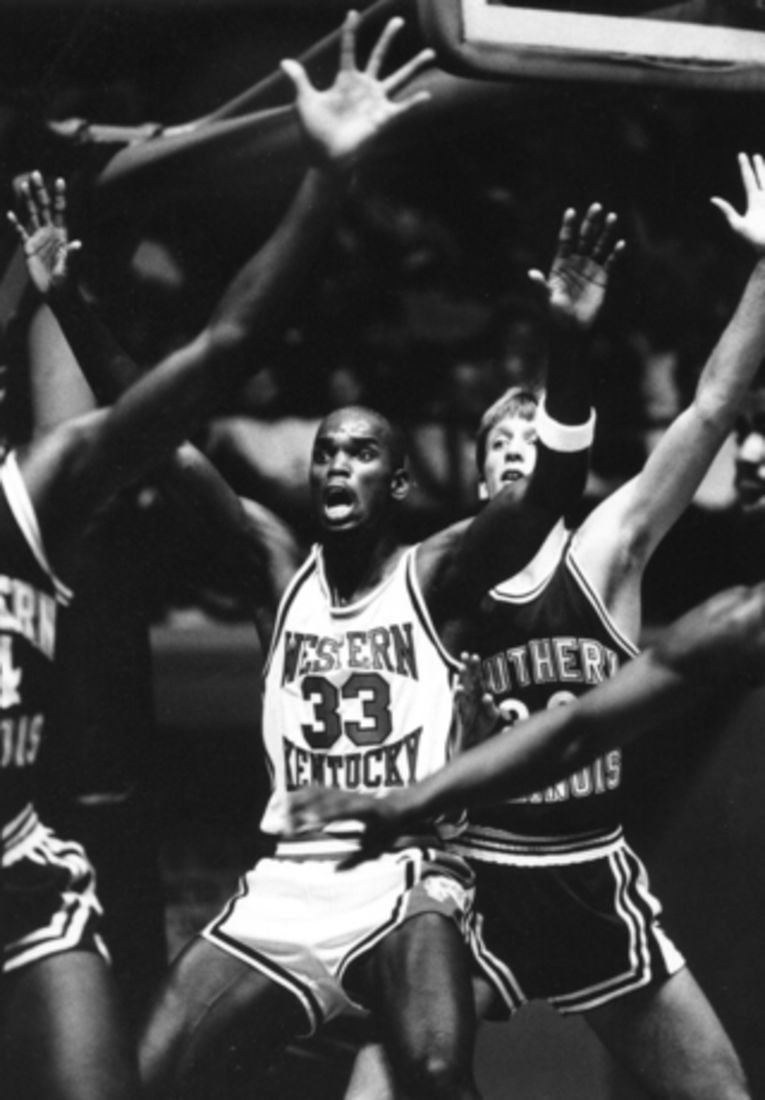 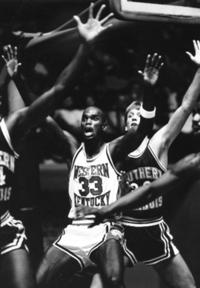 Former Western Kentucky standout forward Kannard Johnson will be among the former players honored by the school Saturday at E.A. Diddle Arena for the 30th anniversary 1985-86 and 1986-87. WKU hosts Marshall at 5 p.m. Saturday at Diddle Arena. (WKU Athletics) 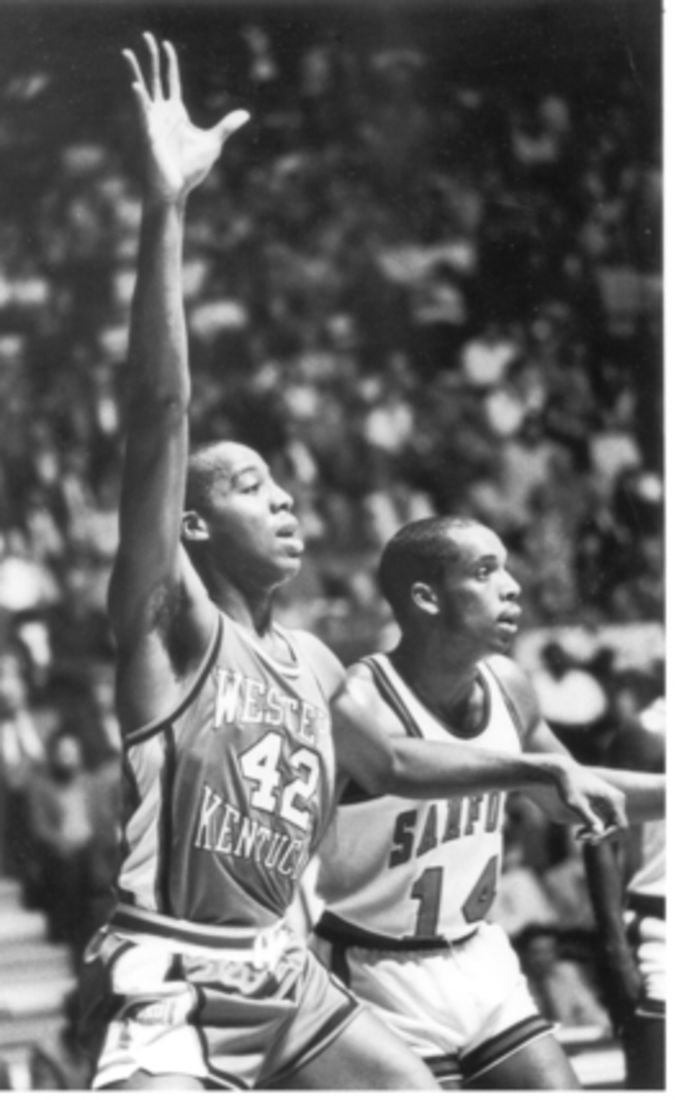 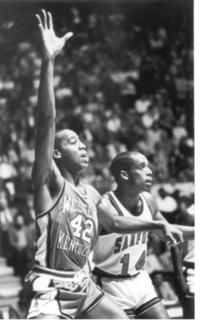 Former Western Kentucky star forward Tells Frank will be among the former players honored by the school Saturday at E.A. Diddle Arena for the 30th anniversary 1985-86 and 1986-87. WKU hosts Marshall at 5 p.m. Saturday at Diddle Arena. (WKU Athletics) 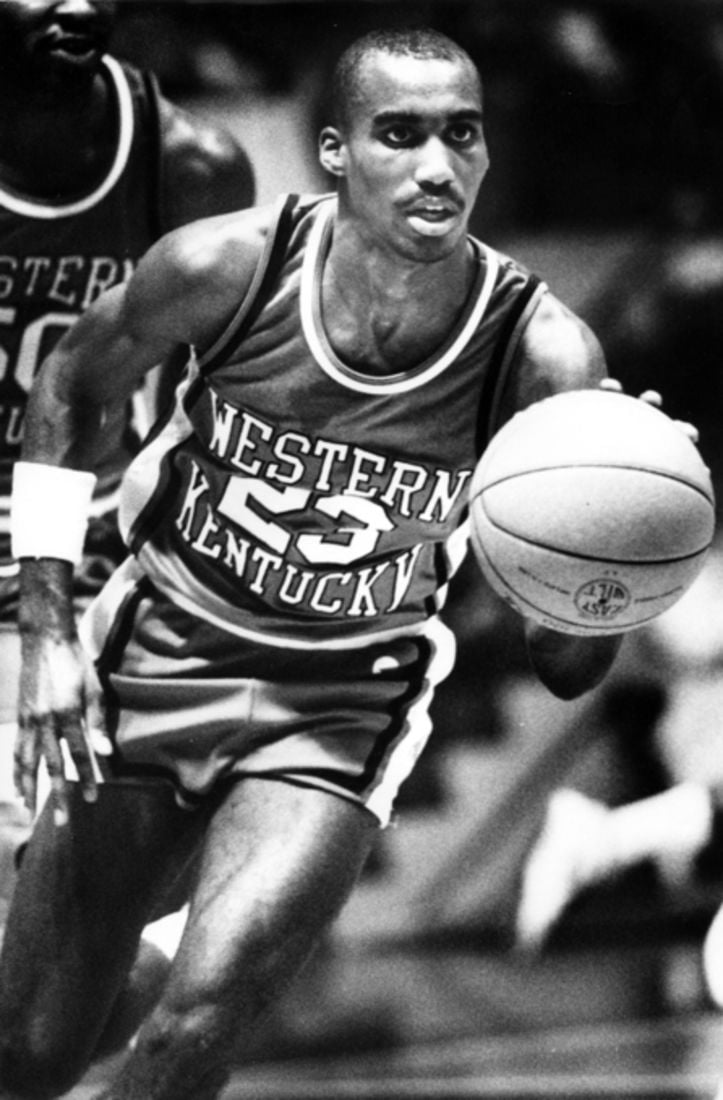 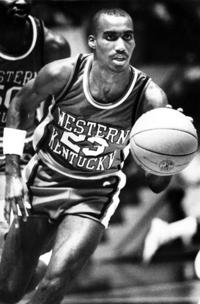 Former Western Kentucky guard Brett McNeal will be among the former players honored by the school Saturday at E.A. Diddle Arena for the 30th anniversary 1985-86 and 1986-87. WKU hosts Marshall at 5 p.m. Saturday at Diddle Arena. (WKU Athletics)

Former Western Kentucky standout forward Kannard Johnson will be among the former players honored by the school Saturday at E.A. Diddle Arena for the 30th anniversary 1985-86 and 1986-87. WKU hosts Marshall at 5 p.m. Saturday at Diddle Arena. (WKU Athletics)

Former Western Kentucky star forward Tells Frank will be among the former players honored by the school Saturday at E.A. Diddle Arena for the 30th anniversary 1985-86 and 1986-87. WKU hosts Marshall at 5 p.m. Saturday at Diddle Arena. (WKU Athletics)

Former Western Kentucky guard Brett McNeal will be among the former players honored by the school Saturday at E.A. Diddle Arena for the 30th anniversary 1985-86 and 1986-87. WKU hosts Marshall at 5 p.m. Saturday at Diddle Arena. (WKU Athletics)

Back pain became a regular part of Kannard Johnson’s life during his basketball career.

The forward would play a season for his pro team in Europe, then come back home in pain after it ended. He’d spend the offseason getting physical therapy and treatment until his back felt fine, go back to Europe for another season, then come home afterward in pain again.

It was a cycle Johnson said he repeated six times in his career.

“It just got to a point where for me basketball wasn’t fun anymore only because I was playing in too much pain,” Johnson said. “Then I started to understand what I had done to my back, how bad it was.”

Along the way, one of Johnson’s physical therapists suggested that he could use his own experience in that field to help others in his shoes.

Now the 6-foot-9 man who was one of the greatest scorers and rebounders in Hilltopper basketball history is now one of the tallest masseurs in South Dakota.

“Some people look at me weird like, ‘Really, you do that?’” Johnson told the Daily News this week from his home in Sioux Falls, S.D. “I run my own massage therapy business. I’ve been doing that now for 13 years.”

Johnson will be one of a collection of former players, coaches and program personnel that will be back in E.A. Diddle Arena on Saturday. The school is honoring the 30th anniversary 1985-86 and 1986-87 teams during halftime of WKU’s 5 p.m. game against Marshall.

Rather than honor the teams separately between last year and this season, Topper sports historian Paul Just said the school chose to honor both teams in the same ceremony because there was so much overlap between the rosters.

“It’ll be good to have this team back in here,” current coach Rick Stansbury said. “You always want those guys part of your program.”

Haskins left for Minnesota after that season and was replaced by Murray Arnold, but WKU’s veteran team didn’t miss a beat.

The 38 games the 1986-87 Hilltoppers played are still a school record.

“When they started giving out these plaques and awards I think they gave out this one plaque to every player that we had broken 29 school and league records – 29!” Johnson said. “… That’s a lot.

“You sit there and you think about that, how many categories are there in basketball where you can get 29 records? There’s not many. But that tells you how good our team was.”

“We knew we were good, we knew we could compete with anyone across the country,” said McNeal from his home in Minneapolis, where he serves as a high school athletic director. “We actually looked forward to playing other teams from different conferences, whether it was in Hawaii or out west, north or south.

“We wanted to prove to everybody that just because we were Western Kentucky, maybe a mid-division, that we could actually compete with the big boys. We wore a little chip on our shoulder.”

Johnson, Frank and Clarence Martin made up a powerful frontcourt for those Hilltopper teams. All three were drafted by the NBA in 1987.

Johnson was honored as an All-Sun Belt player all four years of his career. The former Ohio prep star never averaged less than 12.2 points in his career and also finished with 840 career rebounds, posting at least 5.5 rpg in all four seasons.

“Sometimes you don’t think about how good teams are or individual players are until you have the opportunity to play with them or against them day in and day out,” McNeal said. Johnson “was clearly one of our better players on the team. He could do it all.”

Johnson was drafted in 1987 by the Cleveland Cavaliers, and had short stints with both them and the Los Angeles Lakers. Then he went on to a long pro basketball career in Europe.

“I got nine championships in 13 years over there, so I’ve got no complaints,” Johnson said. “I went over there and did extremely well.”

Then after Johnson’s playing days came to an end, he said he got into the massage therapy business in order to help others who experienced the same pain he did.

Johnson has worked in that field both in his former home of Las Vegas and now in South Dakota, where he moved to with his wife.

Johnson said that many times when local patients think they need a back surgery, their doctors will instead say, “’No, go over and see KJ real quick and see if he can help you before we think about doing any kind of operation on you.’ For me, that’s like a huge compliment as to what I’ve been doing and what I can do.

“I’ve been able to put my knowledge of what I’ve learned about the human body with sports and injuries and help people prevent themselves from getting hurt,” Johnson said. “So for me, that’s been a huge success.”

This weekend, Johnson will put that work on hold for a few days to come back to Bowling Green and reconnect with old friends, coaches and teammates.

“Some of these guys I haven’t seen in wow, 30 years,” Johnson said. “So it’s extremely exciting for me getting a chance to see the guys that I played with, the guys I pretty much grew up with in college, took classes with, hung out with, practiced with every day.