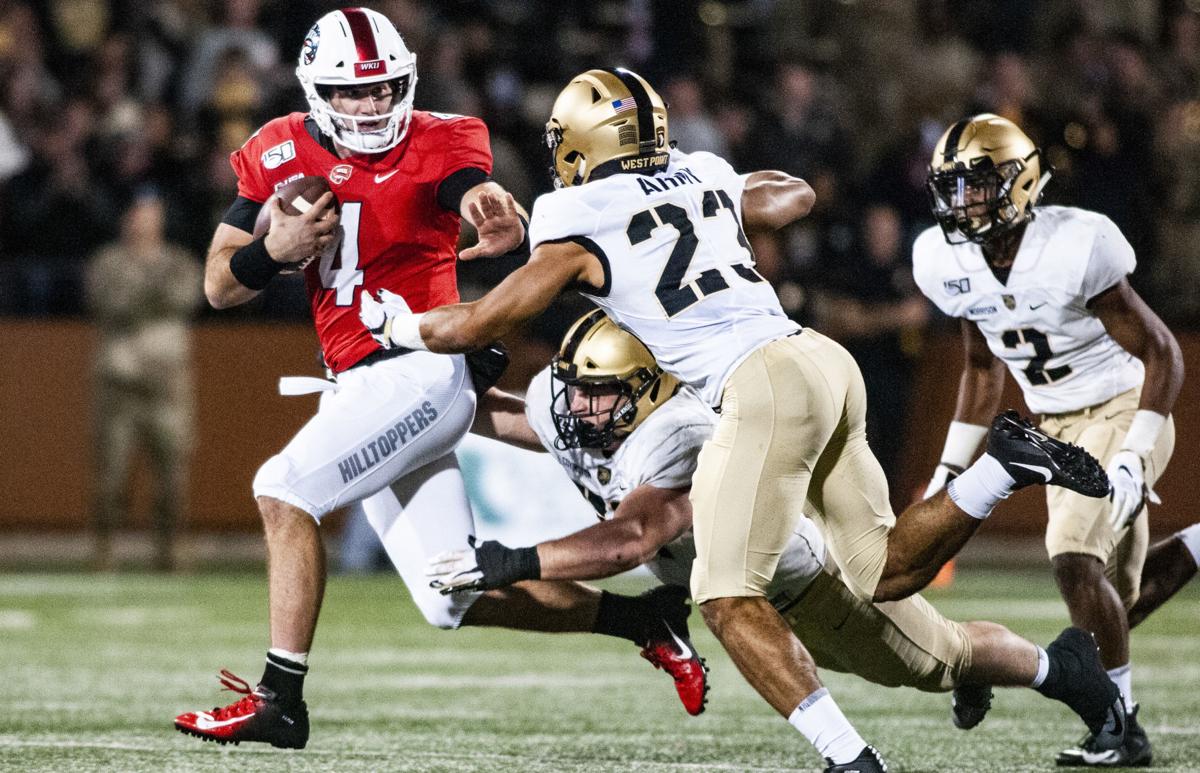 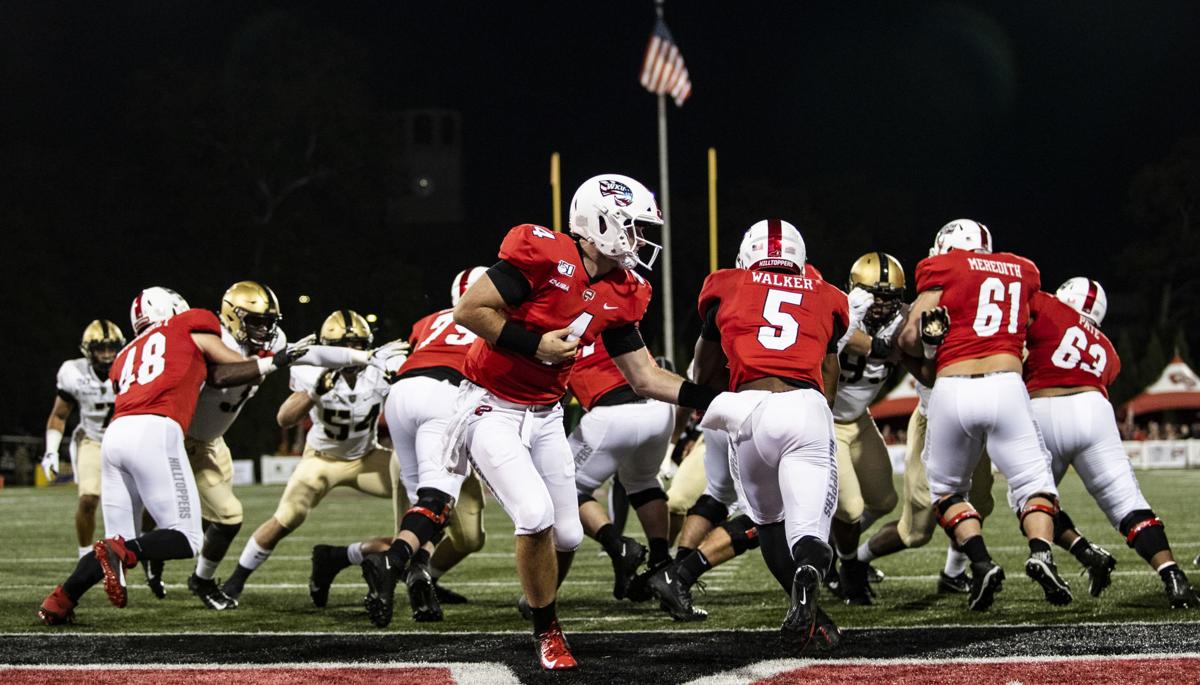 Western Kentucky quarterback Ty Storey hands the ball off to WKU running back Gaej Walker during the Hilltoppers’ 17-8 win over Army on Saturday at Houchens-Smith Stadium. 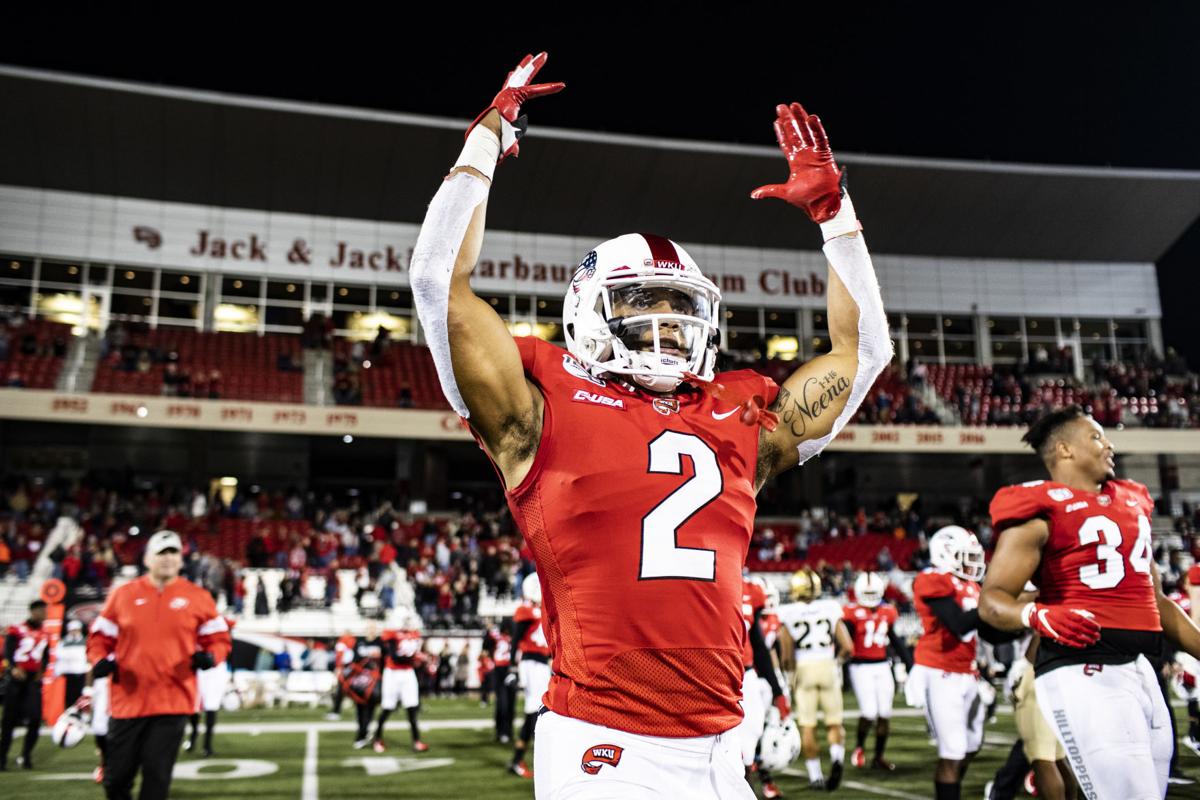 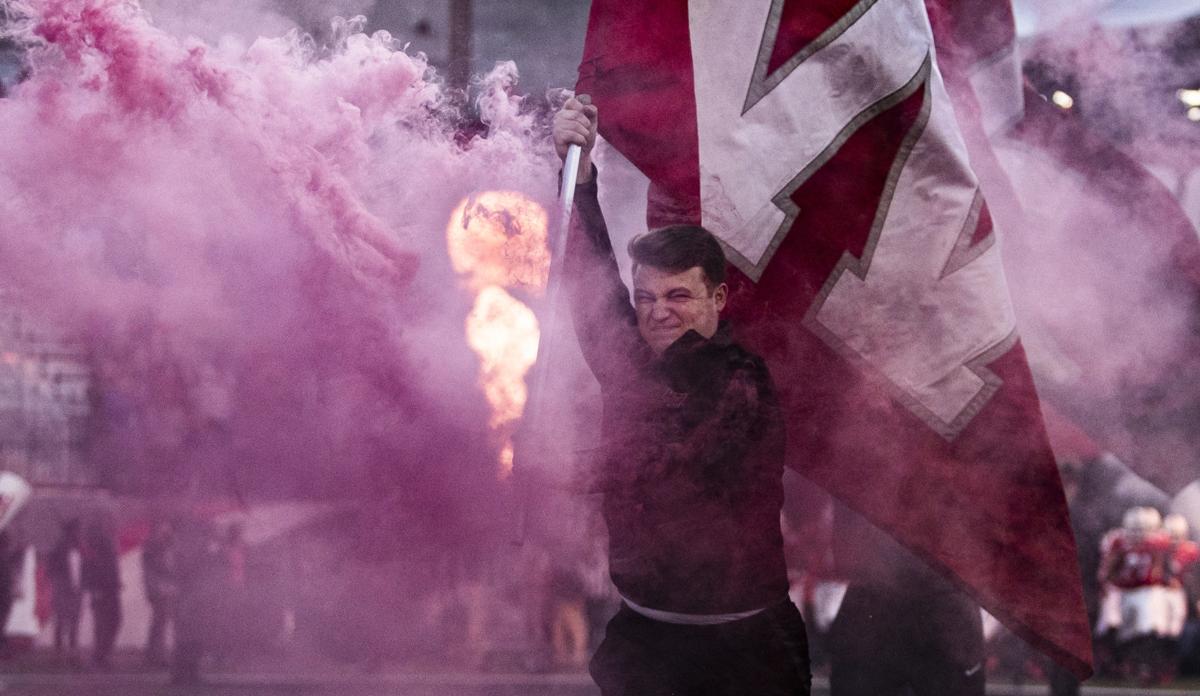 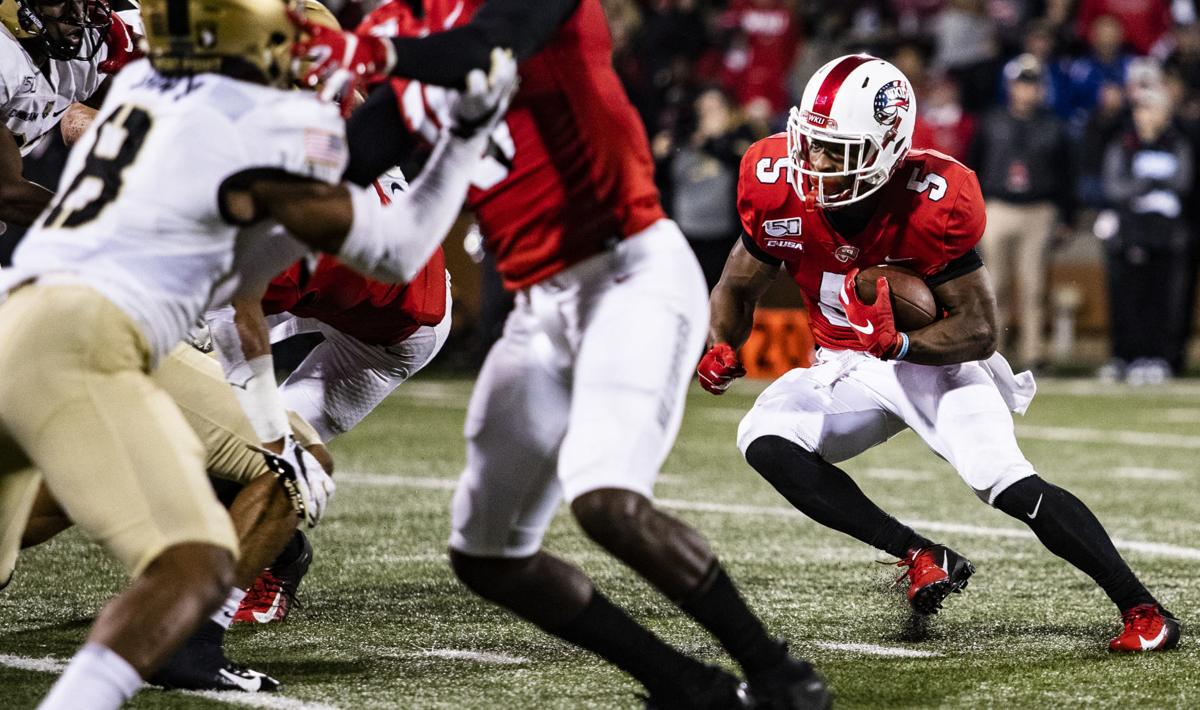 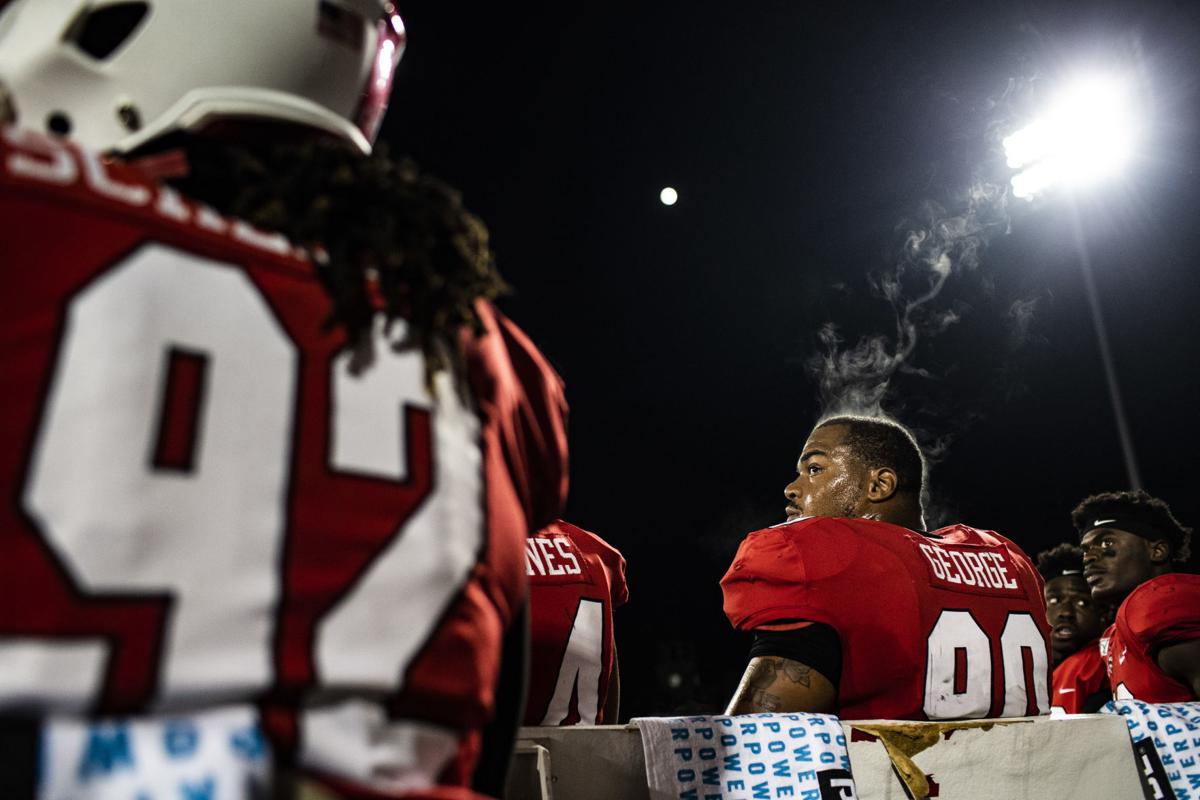 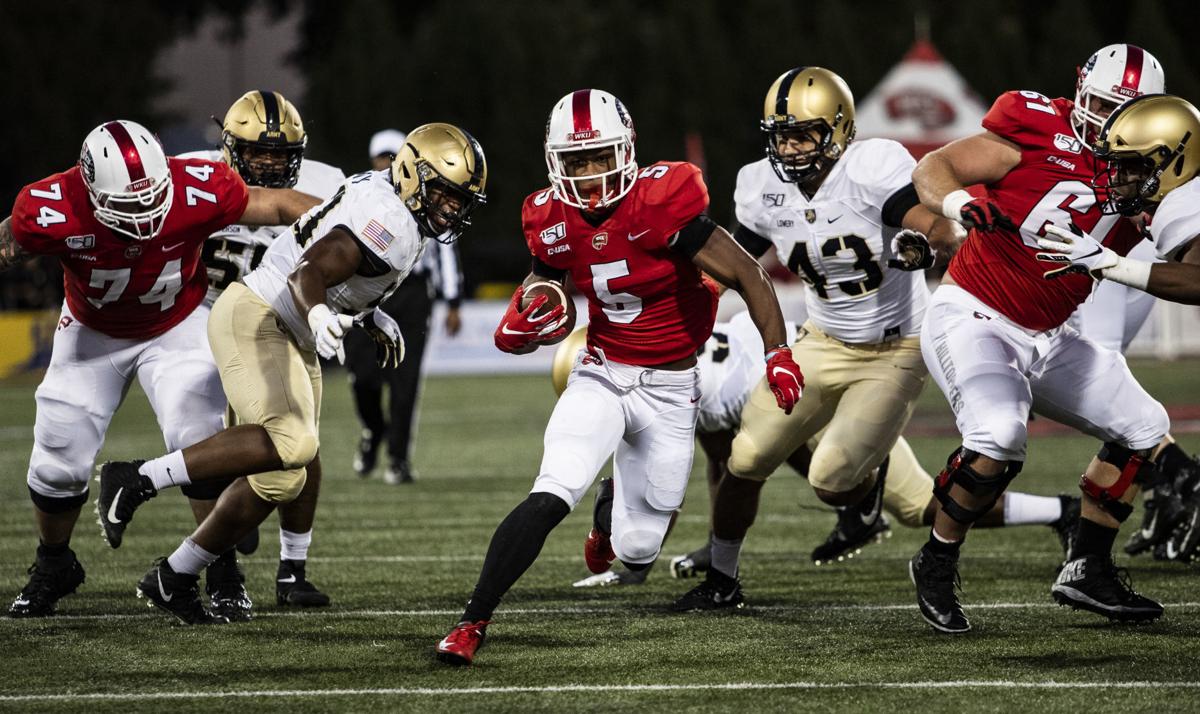 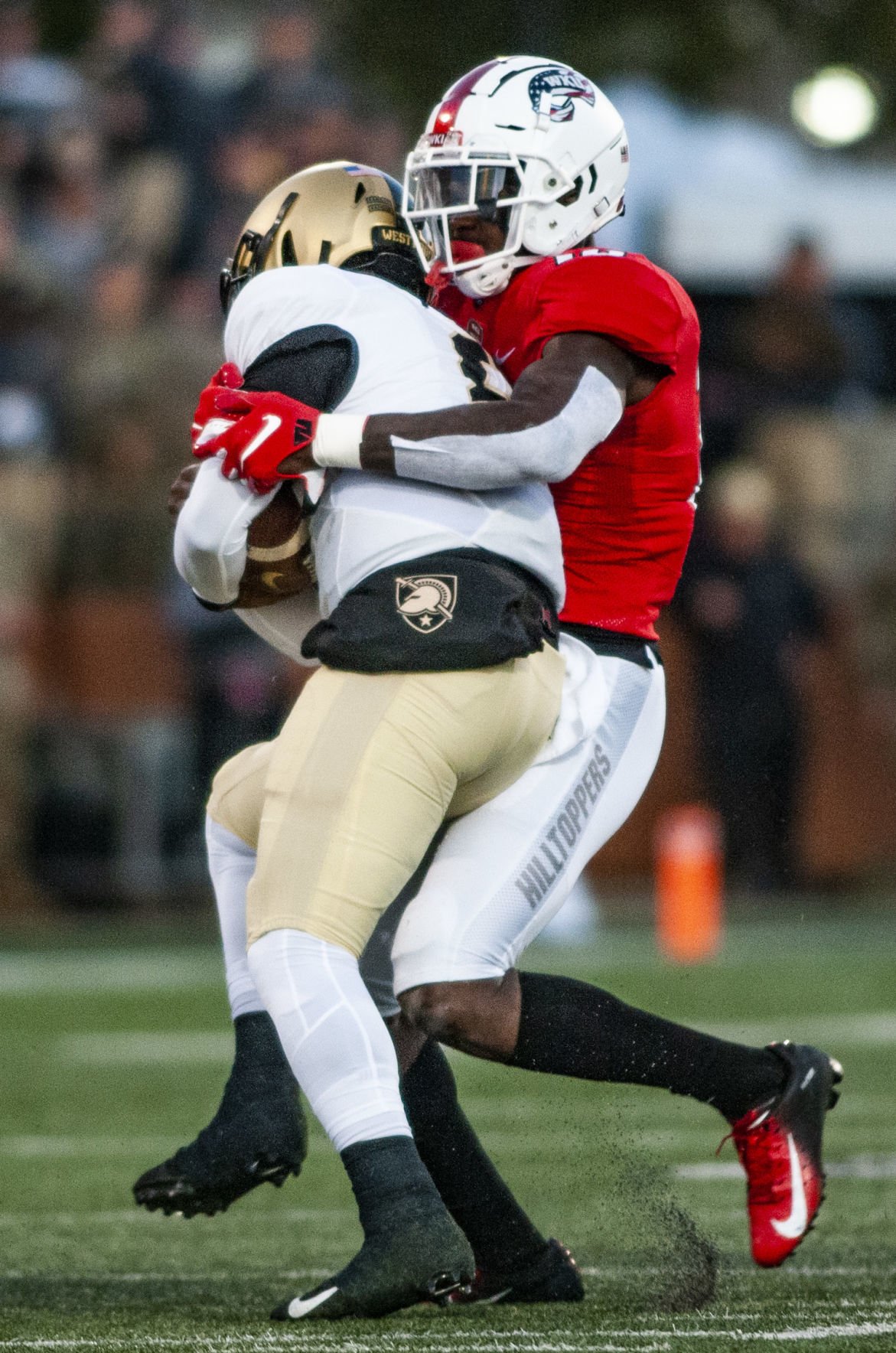 Western Kentucky quarterback Ty Storey hands the ball off to WKU running back Gaej Walker during the Hilltoppers’ 17-8 win over Army on Saturday at Houchens-Smith Stadium.

What’s the best way for a team to beat a team as disciplined as Army?

Do what Army does, apparently.

Just when Western Kentucky thought it couldn’t play any better defensively, it did just that while the offense was complementary in a total team effort. The Hilltoppers beat Army at its own game and despite a garbage-time touchdown to prevent a shutout, WKU made a statement that 2019 might be different after all.

Ty Storey led the offense methodically and the defense shut down the Black Knights in a 17-8 win Saturday night at Houchens-Smith Stadium.

The Hilltoppers were in control from the start with Storey’s touchdown in the first quarter that chewed five minutes off the clock and another late in the fourth quarter that took nearly nine minutes to complete.

Meanwhile, WKU pounded the ground for 225 yards to roll to its third straight victory.

“I don’t want to call it dominating because I hate using those words, but it was a decisive win and we needed that as a team, one of those decisive wins,” WKU coach Tyson Helton said. “I think we held it for 38 minutes, which was normally what they do. That was great. We knew we were going to have to do that to beat this football team.”

WKU has eclipsed its season win total from 2018 and now sits two victories away from bowl eligibility. Saturday’s nonconference victory came against a team that ranked No. 19 in the final Associated Press poll a year ago and went 11-2. The Black Knights’ only losses coming into Bowling Green were in overtime at Michigan and at home last Saturday to a red-hot Tulane team.

Helton isn’t hanging any achievement banners on nearly holding one of the top rushing teams in the country scoreless and to a season-low in ground production, but WKU’s win sets the tone for the stretch of Conference USA games coming up against Charlotte, Marshall and Florida Atlantic over the next three weeks.

“It sets us on a path where our team finally realizes that yes we can be a really good football team,” Helton said. “There’s a lot still ahead of us left to accomplish, but we have not accomplished anything yet by any means. It says to us, yes, you can go out there and be a very special football team.

“You’ve got to keep working hard and you have to continue to have an edge and do all the right things. It makes a statement about our football team and what they’re trying to accomplish.”

WKU outgained Army 365-208 in total offense, yet led just 7-0 at halftime. Storey’s goal-line touchdown with 4:46 left in the first quarter was the only true highlight until Cory Munson’s 22-yard field goal midway through the third quarter.

Both scores were a result of long scoring drives WKU has worked to complete all season. Storey’s first score came on an 11-play, 70-yard drive and Munson’s field goal came with WKU reaching the Army 3 after a 15-play, 74-yard drive that ate 7:33 off the clock.

The final dagger came when Storey led an 80-yard drive on 17 plays that took 9:25 off the clock in the fourth quarter.

“We knew that’s what we were going to have to do,” Storey said. “We knew offensively we had a great defense so our main goal is to obviously score points, but at the end of the day if we could keep (Army’s) offense off the field and give our defense a break and put up 20 or so points we were feeling really good about getting the win.”

Army broke that up after going down 17-0 and scored with 1:41 left on the clock with Kelvin Hopkins Jr.’s 8-yard pass to Malik Hancock.

“Really disappointed with the way we played,” Army coach Jeff Monken said. “They outplayed us, they out-toughed us. They ran the ball and we didn’t run it. They did everything they needed to to win the game and we sure didn’t.”

“One of the most fun games I’ve ever played,” WKU center Seth Joest said. “It’s just a culture thing. Coach Helton doesn’t take his foot off the gas and he keeps us working. He’s going to keep grinding us and making us better. It’s working and we’re winning and it’s great to see.”

WKU hosts Charlotte this week for homecoming at 3 p.m. CDT on ESPN+.{&end}

Tyson Helton answers questions from the media following the Hilltopper's 17-8 win over Army.