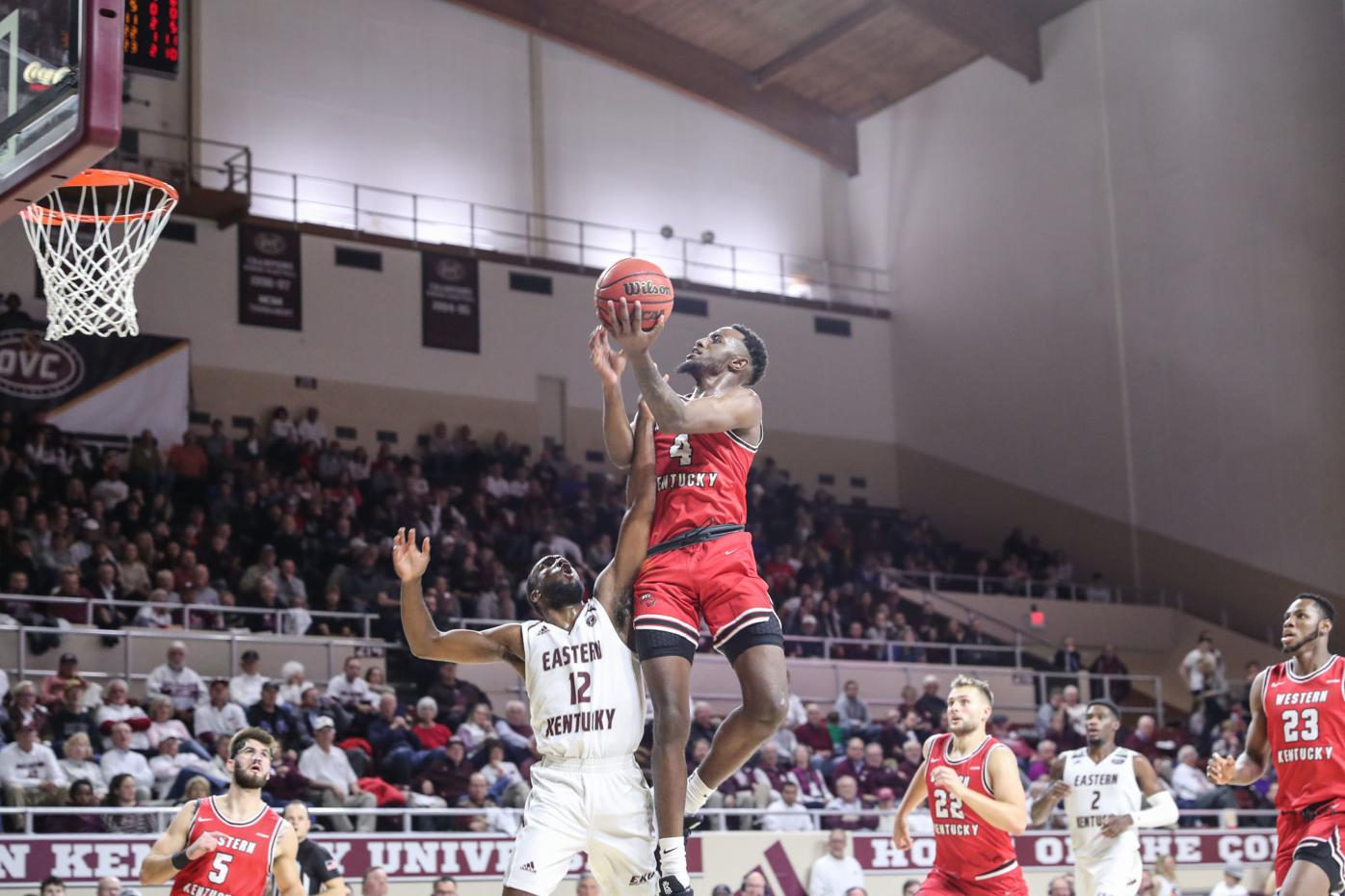 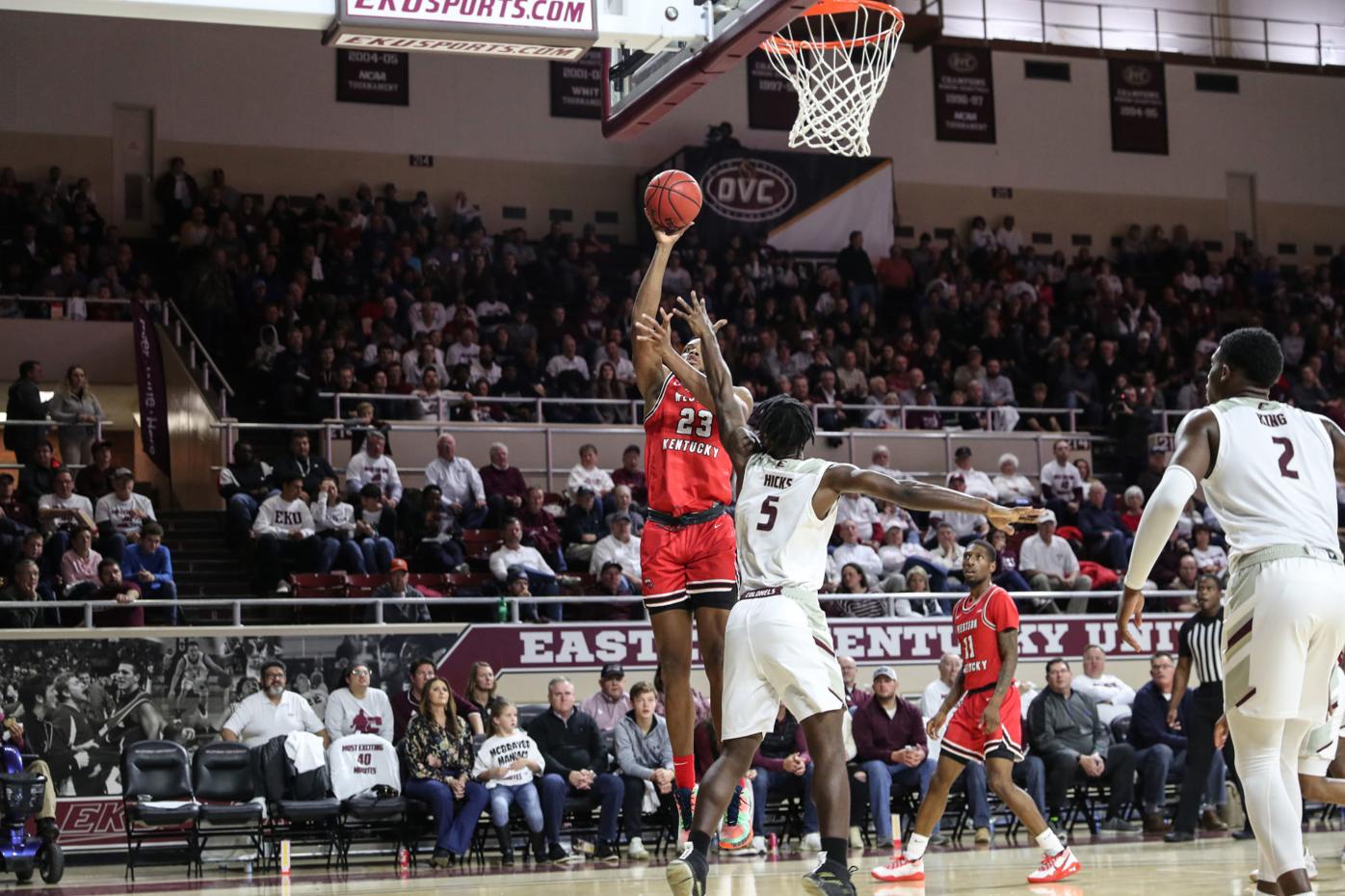 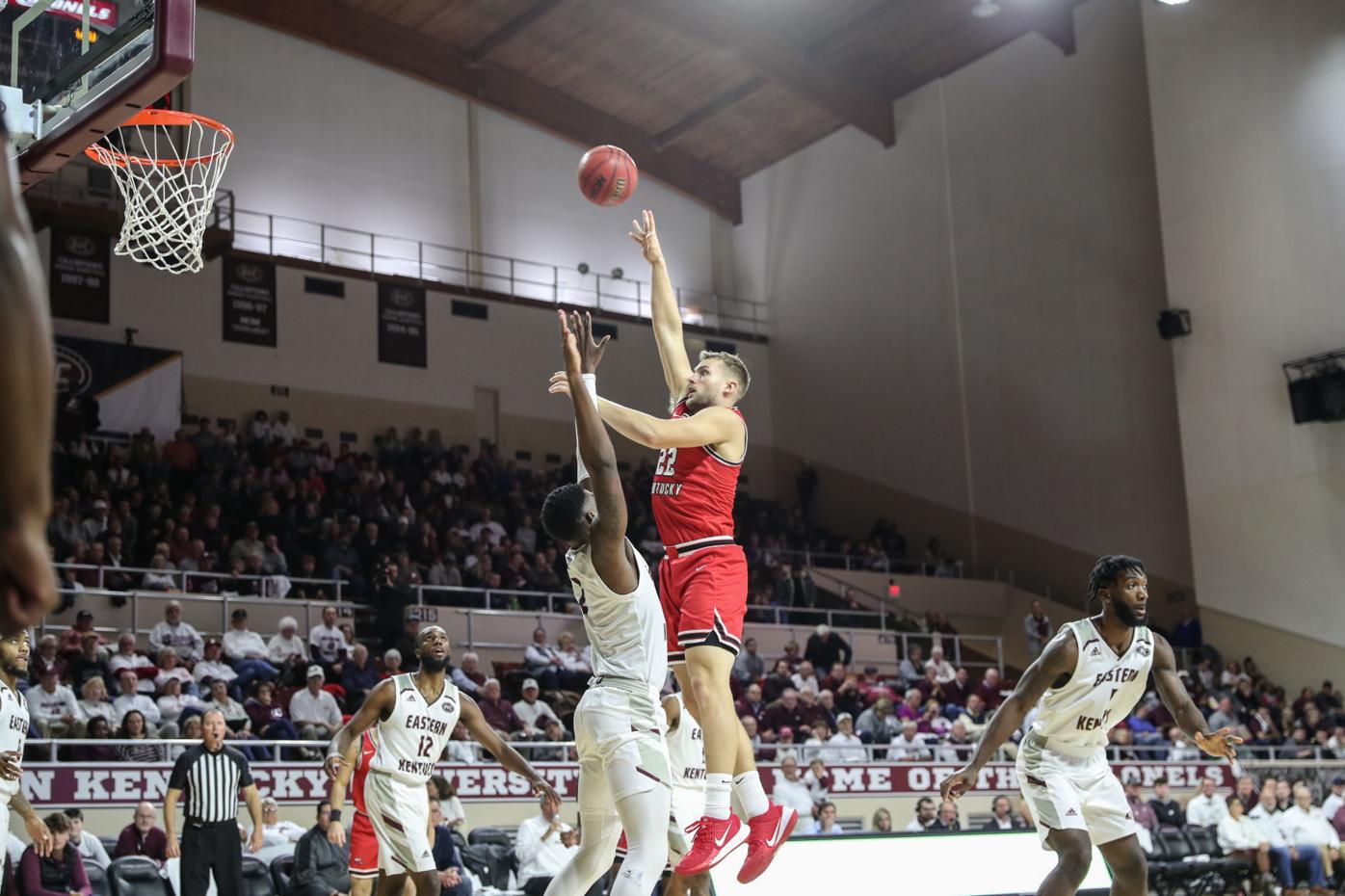 RICHMOND – The key to Western Kentucky’s first two games was the consistency of the starting five. Rick Stansbury knew the true measure of the team would be tested when that five needed help.

WKU withstood a late push and got the contributions it needed from its bench to earn a 79-71 win at Alumni Coliseum against one of the school’s oldest rivals dating back to their days in the Ohio Valley Conference.

The Hilltoppers (3-0) got 28 points from its bench led by the perfect shooting night of freshman Jordan Rawls, who was 5-for-5 from the field for 14 points. Josh Anderson’s aggression paid off at the foul line with nine of his 11 points coming from the stripe.

Their play was timely considering an ankle injury to Jared Savage and an off-night shooting for Camron Justice, the team’s leading scorer in previous wins against Tennessee Tech and Austin Peay.

“Coach told me and Josh to be ready and tonight we had to produce even more because we had certain guys not making shots and Jared go out with an injury,” Rawls said. “Really we just wanted to come in and make contributions.”

WKU returns home to play Campbellsville on Monday night at 7 p.m. before flying to the U.S. Virgin Islands for the Paradise Jam later next week.

“That’s what a team is about,” Stansbury said. “You have to have guys step off that bench and step up. I don’t know if I’d say they stepped up – they just did what I believe they can do every game. Both are huge.”

WKU’s dominance in the paint and free throw shooting paid off on a night where it committed 23 turnovers against the Colonels’ press.

As EKU (2-2) pressed, WKU moved the ball effectively inside to Charles Bassey and Carson Williams. Bassey played just seven minutes in the first half but wore out the Colonels down the stretch and finished with a team-high 18 points and 12 rebounds. Williams had 15 points, three rebounds and five assists.

Western Kentucky knew the press was coming. Even when the Hilltoppers had an 18-point lead midway through the second half, they knew a quick shift in momentum was still in play.

The Colonels were powered by Jomaru Brown’s 41 points and cut WKU’s lead to eight with 1:51 to go. But another strong night at the free-throw line paid dividends with WKU making 18-of-24 shots from the stripe while EKU attempted just 14 foul shots.

Stansbury thought his team handled the press well and that the 23 turnovers were misleading considering most of them came on offensive fouls and three walks in the second half.

“It wasn’t like we were turning over the live ball,” Stansbury said. “We have to eliminate those kids of things. … We went up 18 and turned it over a couple of times in a row to give them a little bit of energy, but for the most part I thought we handled it pretty well. These guys did a good job off the bench and helped us handle it.”

Brown set the tone for EKU early with 15 points to tie it at 21-all midway through the first half. Rawls came off the bench to spark the Hilltoppers by making his first three shots for seven points that pushed WKU’s lead to 33-27.

A 3-pointer from Jeremiah Gambrell and a breakaway dunk from Anderson and another triple from Rawls capped a 10-0 run that extended WKU’s lead by 15 points.

The Hilltoppers got 19 points from the bench in the first half to take a 45-34 lead into the locker room. Rawls was a perfect 4-for-4 from the field for 10 points, Anderson had six and Savage led the starting group with eight points.

The Hilltoppers kept dominating in the paint with Bassey playing the entire second half after seeing just seven minutes in the first half. WKU stretched its lead to 18 points with 7:19 left on a series of Bassey dunks off assists from Williams.

Bassey and Taveion Hollingsworth picked up two fouls in the second half that forced the bench to step up. Hollingsworth also settled in during the second half and finished with seven points, five rebounds, five assists and three steals. The Hilltoppers had 19 assists on their 28 field goals made.

Those first-half fouls made the bench contributions that much more meaningful, the coach said.

“These guys playing isn’t unordinary or unexpected,” Stansbury said. “We need them to play every night like this.”

WKU hosts Campbellsville on Monday in a game that was added as a home contest counting toward the U.S. Virgin Islands Paradise Jam.

Rick Stansbury is now 65-42 in four seasons as WKU’s coach and 358-208 in 18 seasons as a head coach. … WKU’s 3-0 record is its best start since the 2007-08 season. … WKU has made a 3-pointer in 1,013 straight games. … The Hilltoppers extend their series lead over Eastern Kentucky to 114-44 dating back to 1914. … Stansbury is now 4-1 in his career against the Colonels. … In his third college game, Jordan Rawls’ 14 points and 29 minutes mark early career-highs. … Redshirt freshman Jeremiah Gambrell hit his first career 3-pointer in the first half. … Sophomore center Charles Bassey had his second double-double of the season. … Announced attendance was 5,826.{&end}