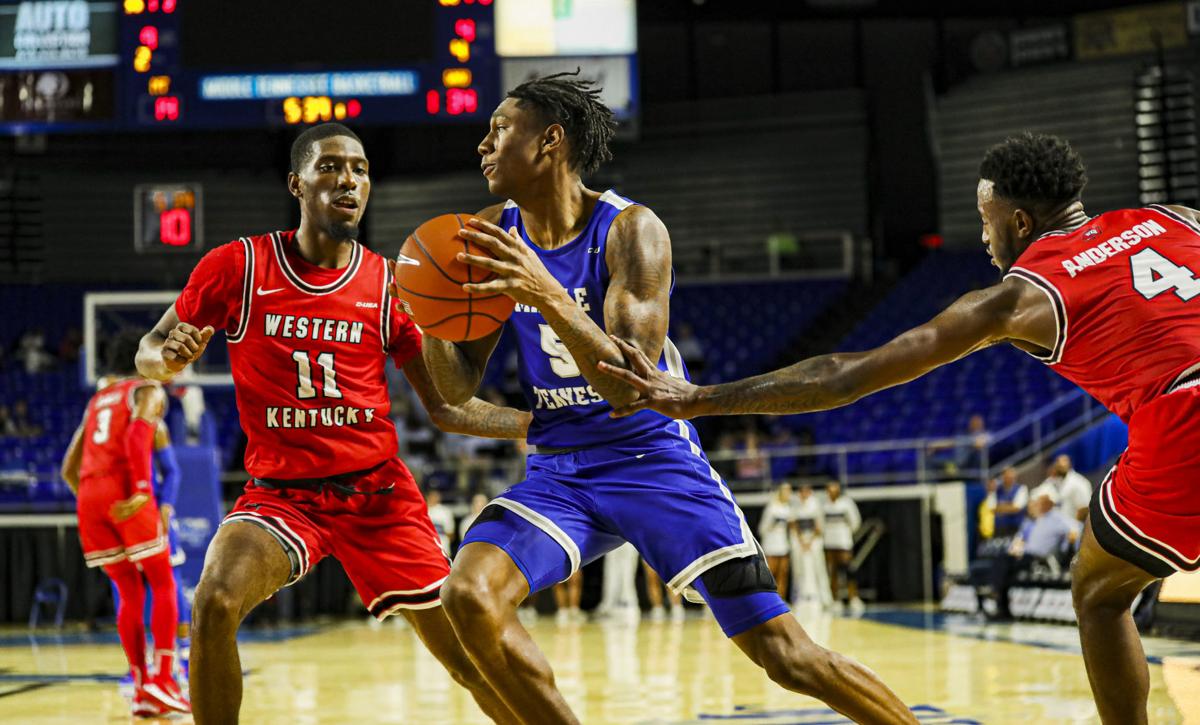 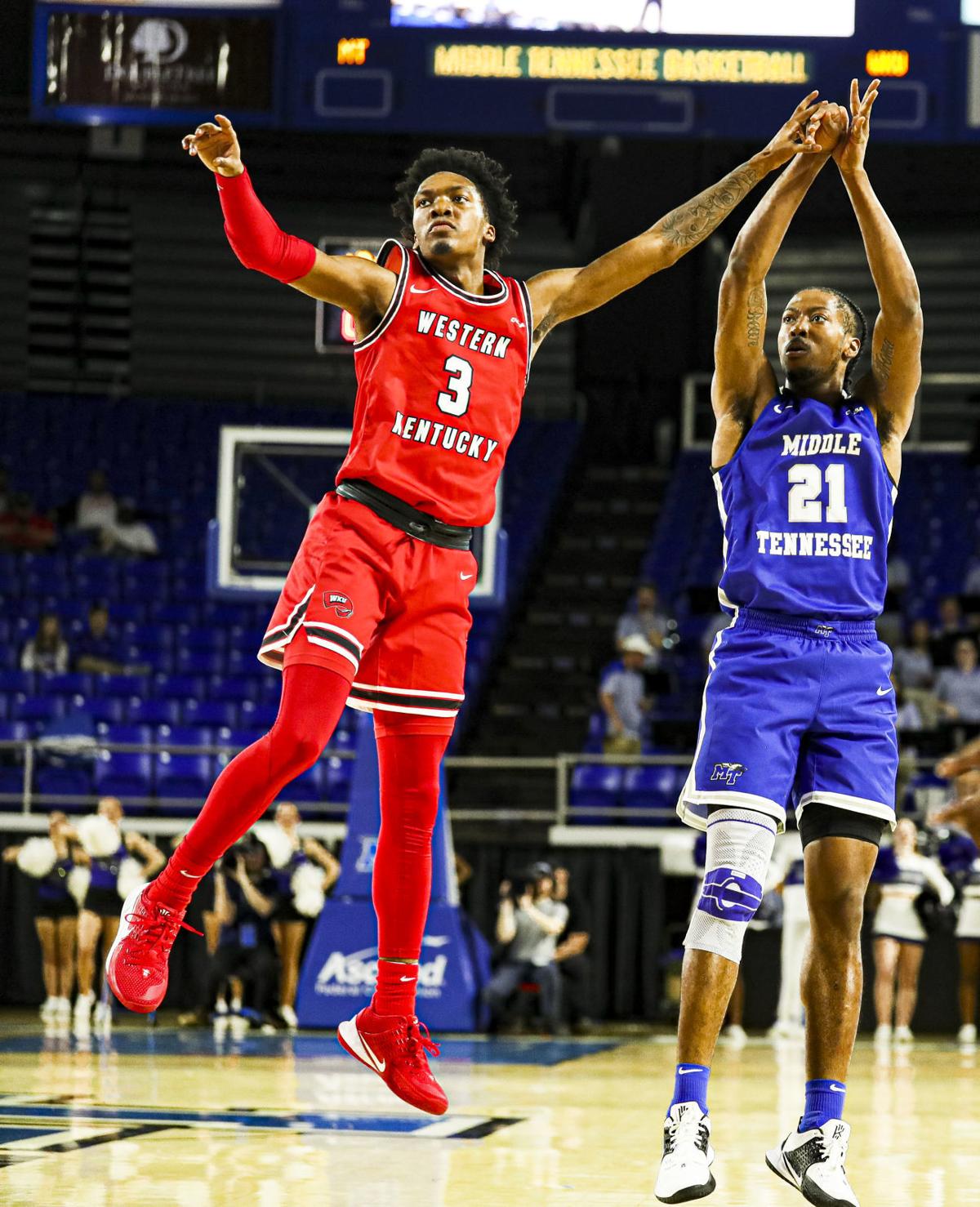 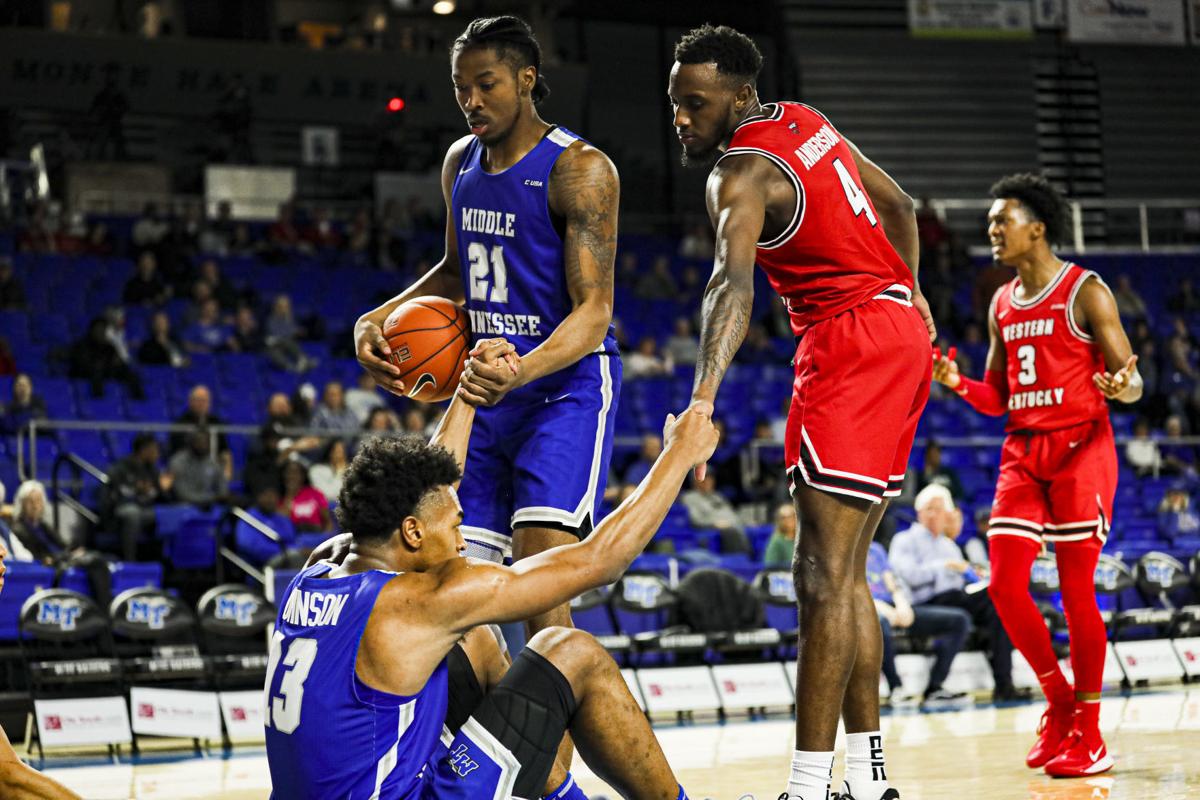 MURFREESBORO, Tenn. – Western Kentucky’s first weekend on the road in Conference USA was a tale of two trips. Thursday’s loss at UAB came without a rhythm as scoring was delegated to the starting five in a mistake-riddled game.

The Hilltoppers flipped all those marks at Middle Tennessee.

A balanced effort and a consistent presence in the post propelled WKU to an easy 69-53 win Saturday afternoon at the Murphy Center.

“That’s how you bounce back,” WKU junior Josh Anderson said. “We’ve got some veteran guys. After Thursday we talked in the group chat and came together and talked about what we need to get better on and things we can improve on and I think we did that well tonight.”

The Hilltoppers were solid defensively in holding the Blue Raiders below their 8.4 3-pointers per game average. Middle Tennessee was held to 35 percent shooting from the field and WKU scored 25 points off 18 turnovers.

The Hilltoppers were well-rounded attacking the boards with five players bringing down at least five rebounds and WKU outscored the Blue Raiders 38-26 in the paint. WKU also capitalized at the free-throw line by hitting 17-of-26 foul shots while Middle Tennessee attempted just 13 free throws.

“We had about as good a flow as we’ve had on both ends today,” WKU coach Rick Stansbury said. “They deserve all the credit. We were able to get back up off a tough loss Thursday night and go on the road and win another game in a quick turnaround.”

That effort came two days after WKU had no points from the bench and three players combined for just 16 points. Most of that setback came as a result of the injury Camron Justice suffered in practice Monday. The senior guard played just eight minutes off the bench at UAB and was inactive at Middle Tennessee.

That gave Jordan Rawls the starting nod for a second-straight night at point guard. The freshman had six points and three assists.

Isaiah Cozart and Jeremiah Gambrell were the biggest contributors from the bench by combining for 28 minutes. Gambrell was the key difference among the reserves with seven points and six rebounds in 19 minutes.

“With two guys down and now Cam down, coach and everybody on the team believes in me and told me to just come in and play and be myself,” Gambrell said. “I was doing little things like getting rebounds and playing defense.”

WKU established itself in the post early with over half its points coming in the paint. Nine field goals came on layups and two more came on dunks from Anderson and Isaiah Cozart off the bench. The Hilltoppers made it look easy, picking through Blue Raiders defenders with a 21-2 run stretching the lead to 34-14 on Anderson’s slam at the 5:58 mark.

All six Hilltoppers who entered the game found the basket and shot 16-of-25 (64 percent) in the first half to take a 42-24 lead into halftime. Middle Tennessee had just two points over a 9:41 stretch until Jayce Johnson’s layup with 3:30 left in the half. WKU held the Blue Raiders to 9-of-28 from the field in the first half and scored 14 points off nine turnovers.

“We got off to a good start in the first half,” Anderson said. “And at halftime, we just came together and told everybody not to give up this lead like we have been doing in the past. I think we’re just learning and improving from our losses.”

The Hilltoppers never let the lead get smaller than 14 points in the second half and built it to as large as a 25-point lead.

Reggie Scurry led Middle Tennessee with 15 points and Johnson and C.J. Jones each had 13 points.

“Never easy on the road, particularly that second game from Thursday to Saturday with the numbers we’re playing,” Stansbury said. “These guys deserve all the credit for staying together and finding ways to come out of the locker room. Our challenge was could we finish the last 20 minutes? These guys found a way to do it.”

Rick Stansbury is now 72-48 in his fourth season as WKU’s head coach. … WKU stretches its lead in the all-time series to 95-43. … The Hilltoppers have made a 3-pointer in 1,026 consecutive games dating back to March 15, 1987. … Freshman forward Isaiah Cozart played for the first time since Nov. 23 against Illinois State. Freshman Jeremiah Gambrell had career-highs with 19 minutes, seven points and six rebounds … Announced attendance at the Murphy Center was 3,167.{&end}