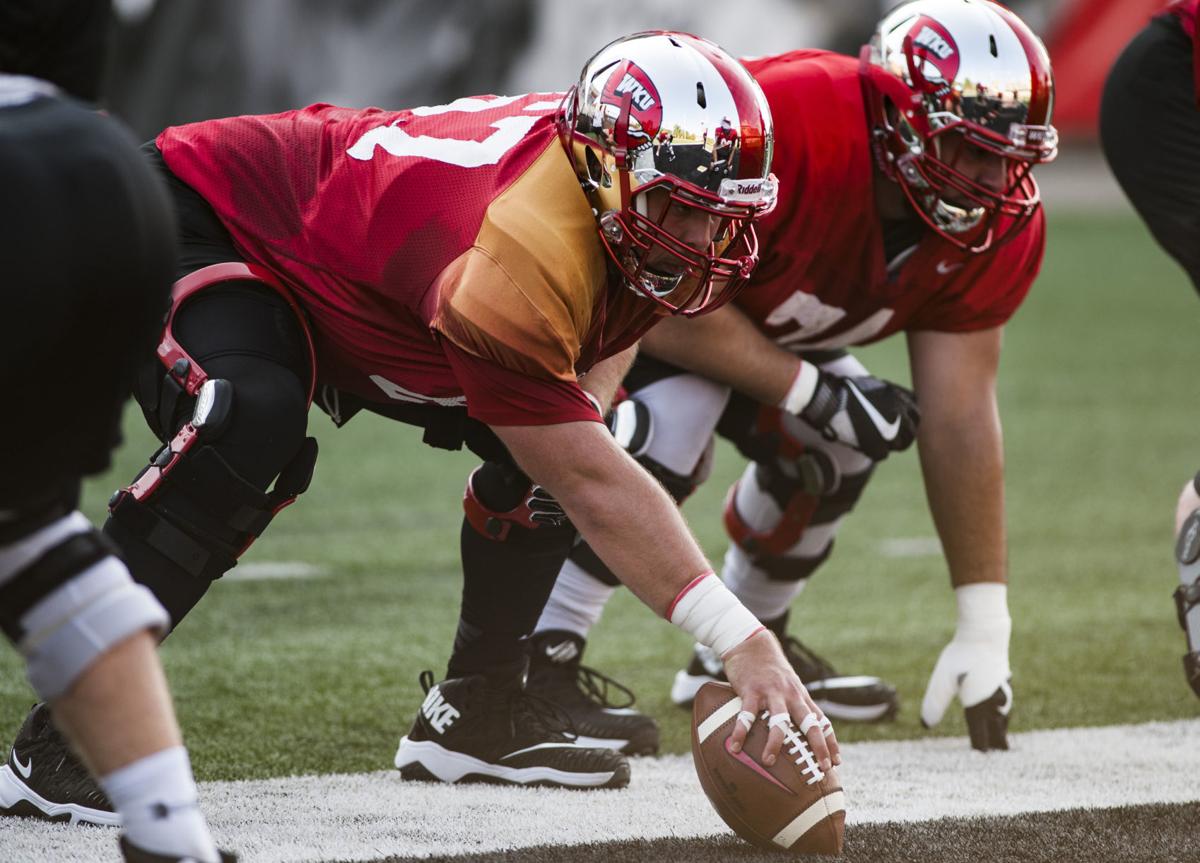 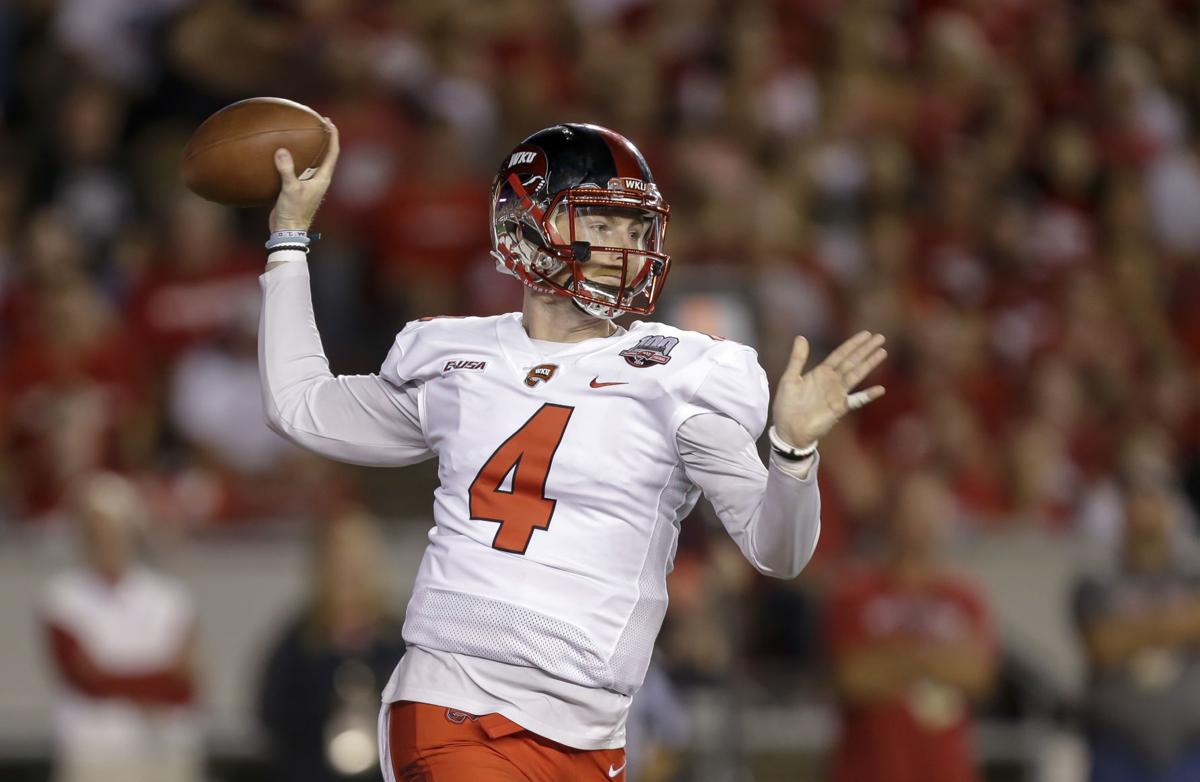 Western Kentucky quarterback Drew Eckels throws a pass against Wisconsin during the first half of an NCAA college football game Friday, Aug. 31, 2018, in Madison, Wis. 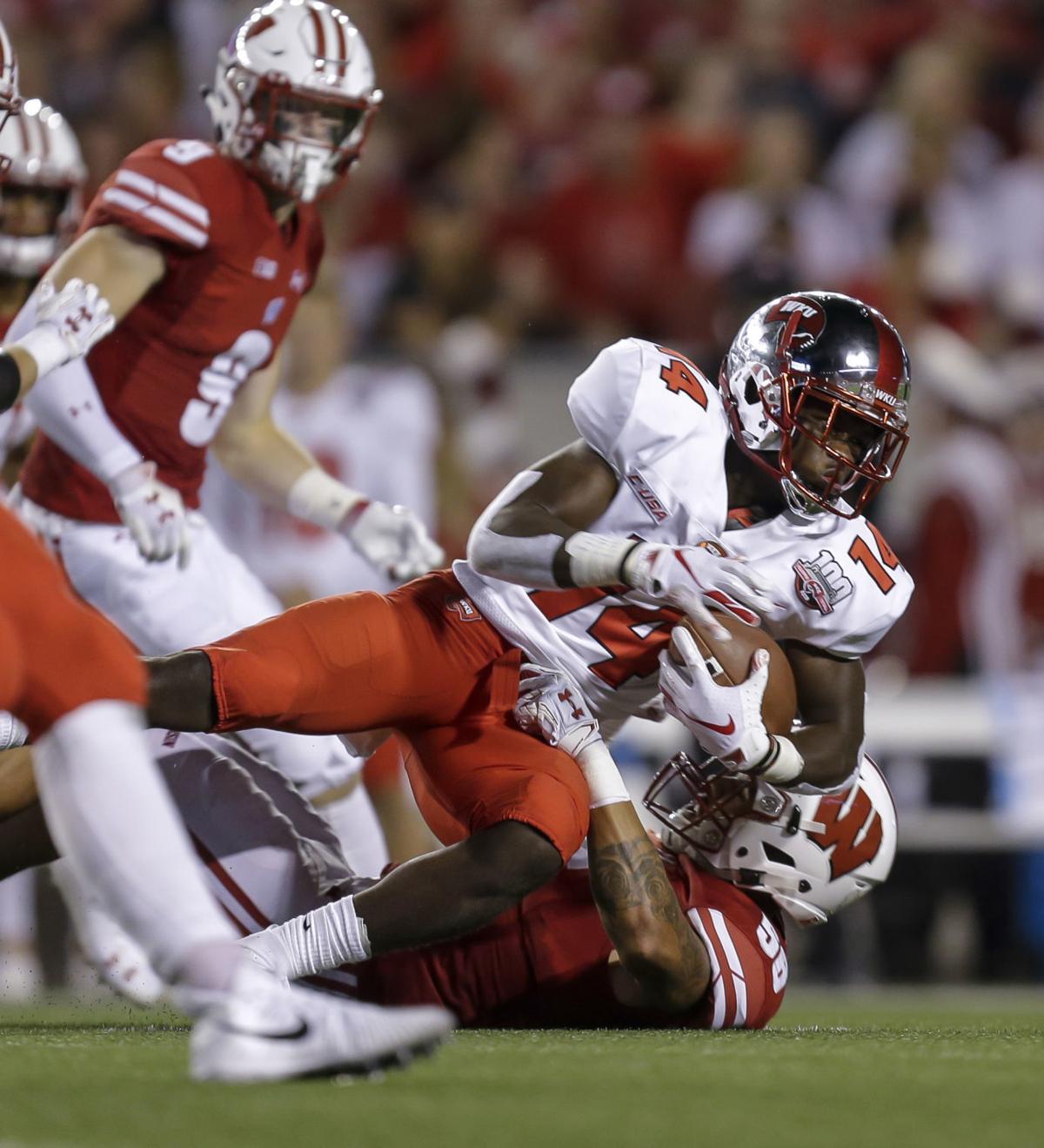 Western Kentucky quarterback Drew Eckels throws a pass against Wisconsin during the first half of an NCAA college football game Friday, Aug. 31, 2018, in Madison, Wis.

The Hilltopper offense managed only three points in a 34-3 loss at No. 4 Wisconsin. But coach Mike Sanford said he was leaving Madison feeling good about his five men up front.

Sanford compared Friday’s opening test against the Badgers to last year’s Week 1, 31-17 win against FCS program Eastern Kentucky. He thought the WKU O-line performed better against the FBS’ fourth-ranked program than it did in 2017 against a middling lower-division squad.

“I’ll tell you this, I came away from the win last year in the opening game against Eastern Kentucky with big concerns about the remaining 11 games,” Sanford said. “We didn’t move the line of scrimmage like I anticipated in that game against an FCS opponent.

“Tonight, we go play the best in the country. …I thought in this game, we established the line of scrimmage better than we did in our opening game a year ago, which was encouraging.”

Sanford hired former Wisconsin and Oregon State O-line coach TJ Woods this offseason with hopes of revamping the Tops’ front five. He shuffled lineups during fall camp until finding one he thought worked.

That young group of offensive linemen started against a Wisconsin defense that’s traditionally been one of America’s stoutest.

That was the only sack WKU allowed Friday night against the Badgers. For comparison, the 2017 Hilltopper offense ranked No. 127 of 130 FBS teams last year in sacks allowed per game (3.69).

Part of that can be attributed to Eckels’ mobility as compared to last season’s starting quarterback, Mike White. The redshirt senior Eckels successfully evaded pressure when it came to him.

But the WKU O-line also successfully navigated blitzes and held its own against Sagapolu (6-foot-2, 342 pounds) and the rest of the Badgers’ beefy defensive line.

In the run game, the Hilltoppers averaged 3.6 yards on 34 official carries. Their 124 rushing yards more than doubled the 60.8 they averaged per game last fall. WKU’s rushing output was the most allowed by a non-conference opponent at home by Wisconsin since BYU ran for 163 in 2013.

“I think they did a fantastic job,” Eckels said of the offensive line. “Toward the beginning, they just had to get acquainted with the sort of stunts they were doing up front. They’ve got some big, fast guys, Wisconsin, on their D-line.

“I thought we got acquainted with it pretty fairly close to the end of the first quarter. … I had protection and even if I didn’t have protection, I found my way out of it. I’m happy with how our team played tonight.”

Eckels looked to wide receiver Xavier Lane more than any of his other pass catchers Friday.

Lane’s biggest catch of the night was a 17-yard grab in the third quarter. He also caught passes of six yards in the first quarter, eight in the second and nine in the third.

The redshirt sophomore Lane dropped two passes, both of which were along the left sideline and would’ve counted for first downs. The second of those drops came on a fourth-and-6 from the Wisconsin 14 and resulted in a turnover on downs.

Five other passes from Eckels to Lane resulted in incompletions, including three in the red zone during the third quarter.

Lane was up-and-down as a redshirt freshman in 2017, finishing with 27 receptions for 336 yards. He started at wide receiver Friday along with Jackson and Quin Jernighan.

Sanford was asked after the game why the Hilltoppers didn’t get more production out of their passes to Lane.

“Well, Xavier Lane is an outstanding player,” Sanford said. “He’s a great young man and he’s battled and put forth just a great offseason. I have faith in him just like I do all of our players. I’m going to stand up for Zay and know that he’s going to put together a tremendous 2018 season.

“I believe in Xavier Lane. I believe fully in him and I believe in him as a player. I believe he’s one of the more talented players in Conference USA out on the perimeter. He’s going to play that way, I guarantee you that.”

WKU’s leading receiver in terms of yardage Friday was Jacquez Sloan. The sophomore caught only one pass, but it was a 48-yard reception in the third quarter.

All 5 RBs get carries vs. Badgers

Sanford said he would play all five against the Badgers and he stuck to his word.

The freshman LaFrance added three receptions for 13 yards in his college debut.

WKU never found a feature running back in 2017 and finished last in the nation in rushing. Ferby, then a redshirt junior, led the Hilltoppers on the ground with just 373 yards on 117 carries.

Sanford declared the race for carries wide open going into August’s fall camp. That race continued into the season opener.

“We’re going to watch the film and evaluate it,” Sanford said. “Right off the top of my head, Josh Samuel ran really well between the tackles. ... Gino Appleberry did some really nice things late in the game.

“Garland LaFrance, some of his package was neutralized a little bit by their edge, but I thought that the running back group was a lot better. I thought D’Andre Ferby ran a lot better behind his pads than he has, and Trigg did some good stuff as well.”{&end}