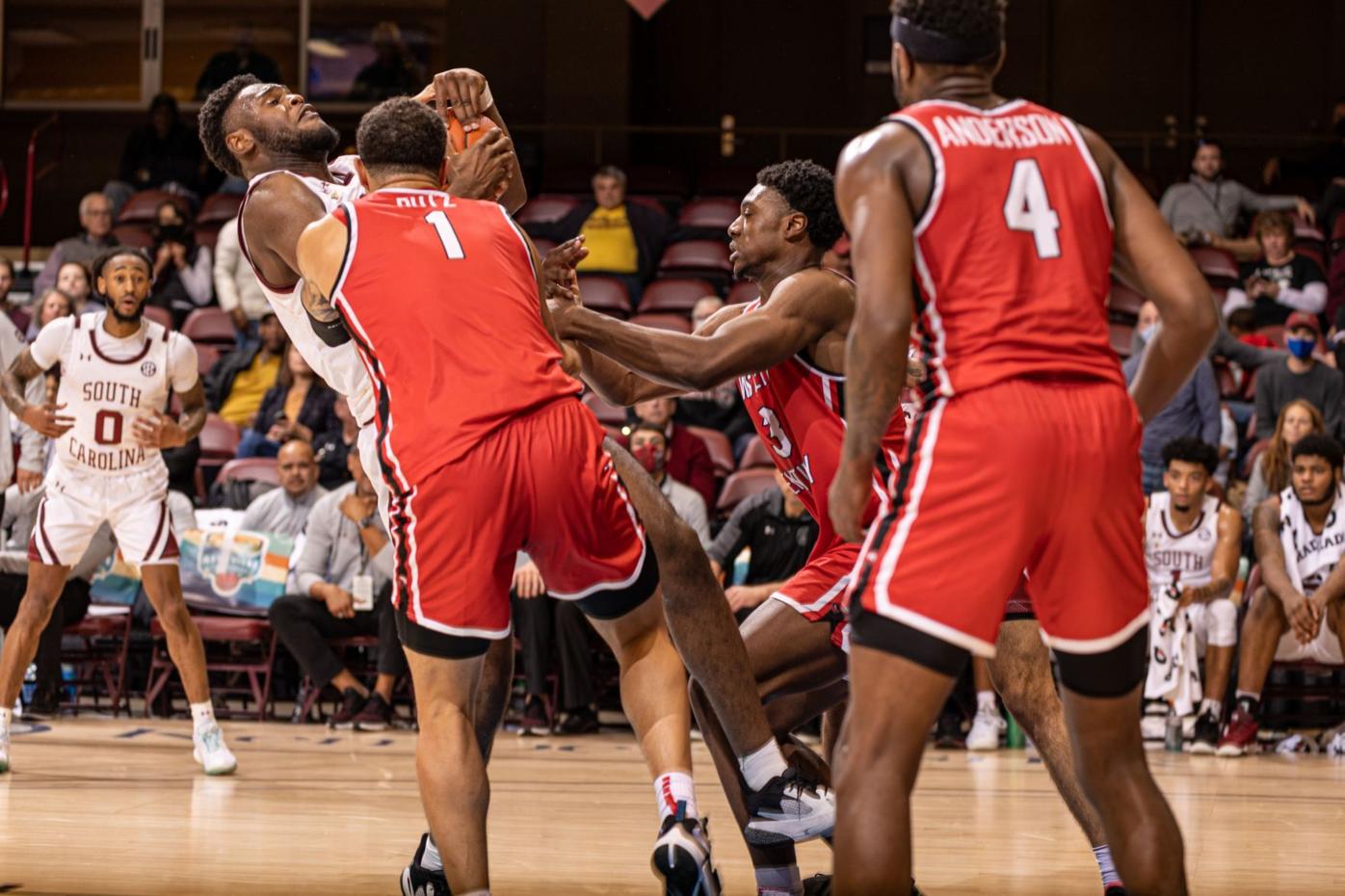 Western Kentucky's Jaylen Butz (1) and Jairus Hamilton (3) battle for a ball against South Carolina during the Asheville Championship at Harrah's Cherokee Center in Asheville, N.C. 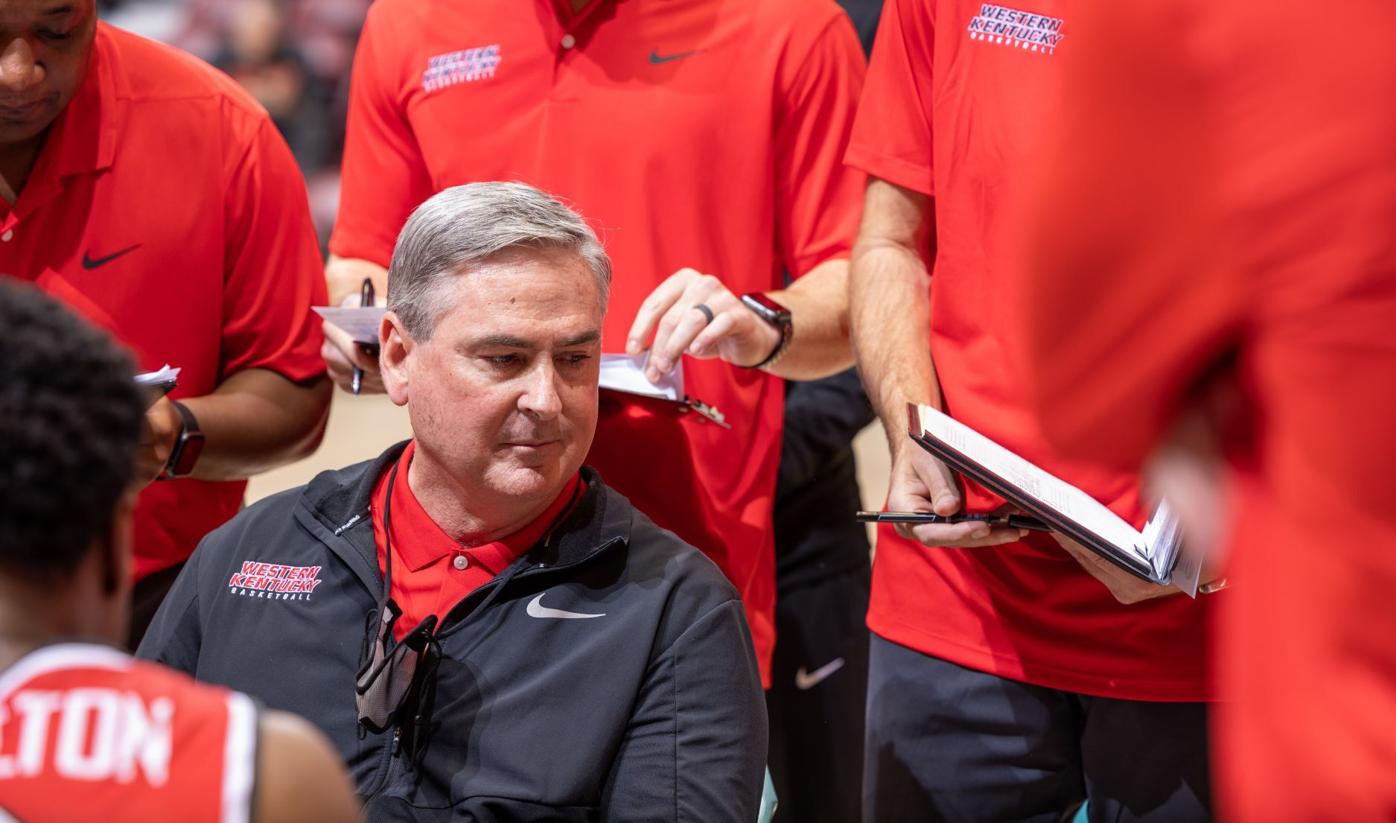 Western Kentucky's Jaylen Butz (1) and Jairus Hamilton (3) battle for a ball against South Carolina during the Asheville Championship at Harrah's Cherokee Center in Asheville, N.C.

After scoring just 23 points in the first half of Friday’s loss to Minnesota, the Hilltoppers scored just 24 in the first half Sunday against South Carolina and fell 75-64 at the Harrah’s Cherokee Center in the consolation game of the Asheville Championship.

“The game, we probably will all overcomplicate it sometimes. Give South Carolina credit. They’re a really, really good defensive team,” WKU coach Rick Stansbury said. “But just jumping up and making some shots changes the outcomes of the games. They hadn’t made them very well the first two games. We haven’t shot them very well at all, but sounds simple, but just making some shots changes things.”

The Hilltoppers lost to Minnesota in Friday’s first game, despite a 28-point second half from point guard Dayvion McKnight. In the loss, WKU struggled to find a groove offensively in the first half and put up just 23 points.

“Right now we feel like we need to start games better. Like I said, scoring in particular,” WKU guard Josh Anderson said. “Just bringing more energy in the first half and just starting off games better and more importantly, finishing them better.”

The Gamecocks struggled early as well but used a 13-2 run to go up 11 with 5:56 to play. The run was started with a triple from James Reese V and capped off by a three-point play from Jermaine Couisnard.

Reese’s 3 was one of five South Carolina made in the half, and part of his team-high nine points by the break. But perhaps the most impressive stat from the North Texas transfer was that McKnight had just two points through 20 minutes after his 34-point outburst on Friday. McKnight had just two points in last year’s Conference USA championship game loss to Reese and the Mean Green. WKU’s point guard finished Sunday’s game with 11 points, six rebounds, five assists and seven turnovers.

WKU cut its deficit to single digits to close the half in part with a four-point play from Jairus Hamilton and a 3-pointer from Camron Justice – his first points since regaining a year of eligibility last week. Justice did not play in Friday’s game.

WKU used an 11-4 run at the beginning of the second half to draw even at 35-all. Luke Frampton, who was scoreless in the first half, scored seven points in the stretch, including his first 3-pointer of the year after starting 0-for-15. Frampton was the Hilltoppers’ top 3-point shooter last season.

Reese knocked down a 3-pointer to break a roughly two and a half minute scoring drought from both teams to push South Carolina ahead for good. The Gamecocks grew their lead to as much as 15 with as 4:31 left, before an 8-0 spurt – capped off by a 3-pointer from Anderson – from the Hilltoppers to make things interesting.

Couisnard knocked down a 3-pointer to end the run – one of his three in the game – and Devin Carter had a putback to make it a 12-point game again and end WKU’s momentum before the Gamecocks closed out the 75-64 win.

“I thought the difference in the game was the first six minutes of the second half, us making a run, but we had – we put them in a bonus ... 14-minute mark, they’re in the bonus. That’s a bad stat,” Stansbury said. “If they’re on, I think they make, if I’m correct, 12 out of 13 free throws. Again, you just can’t give them those kind of free throws that early in the game. That changes the flow of that game a bunch.”

Couisnard and Carter each finished with team highs of 16 points – 14 of Carter’s came in the second half – and Reese had 14 points, including four made 3s. The Gamecocks outrebounded the Hilltoppers 46-28 in the game. South Carolina is scheduled to host UAB on Thursday.

Anderson led WKU with 16 points, while Hamilton had 13, McKnight had 11 and Jaylen Butz had 10. The Hilltoppers finished shooting just 38% from the field and 25% from 3-point range.

The Hilltoppers are scheduled to travel to Memphis on Friday for a 7 p.m. game.{&end}