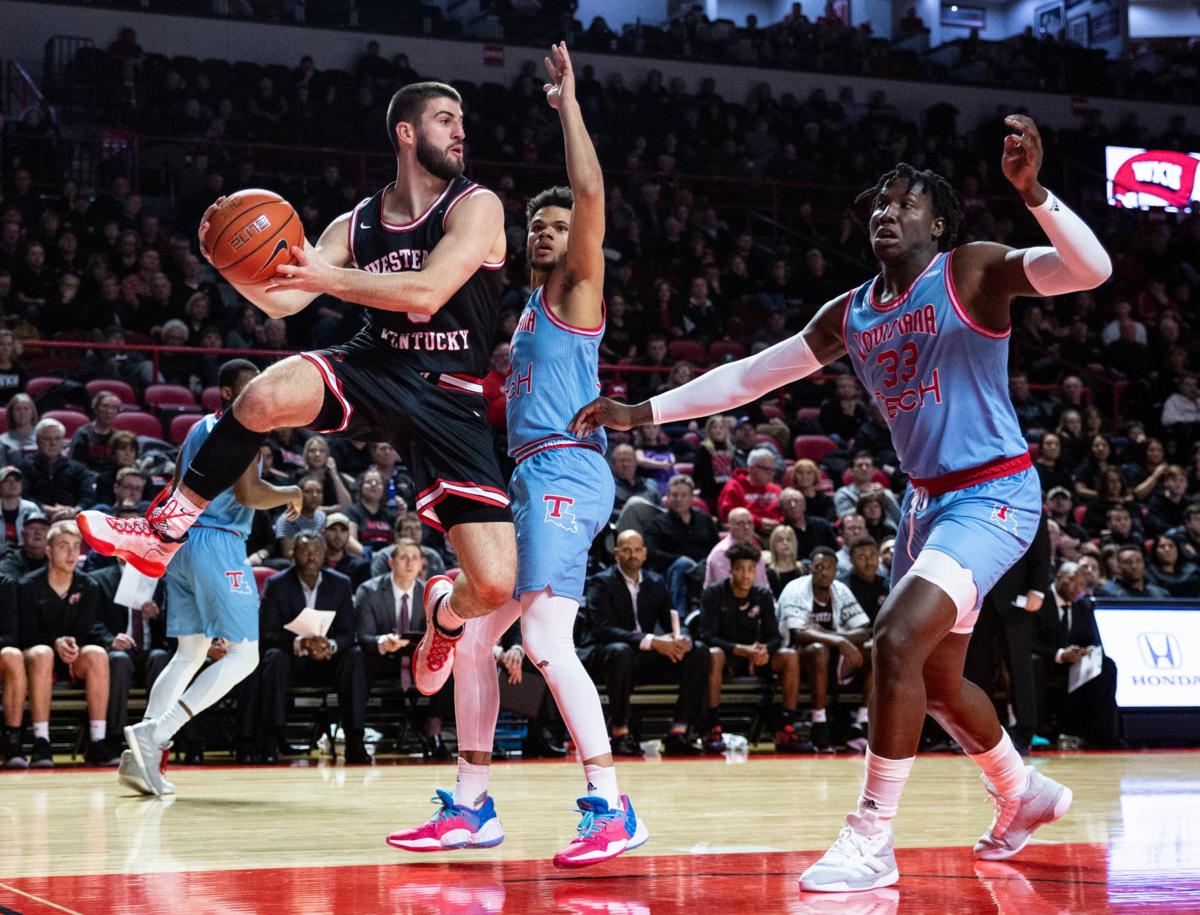 Western Kentucky’s Camron Justice passes the ball before it goes out of bounds in WKU’s 65-54 win against Louisiana Tech on Feb. 6 at E.A. Diddle Arena. 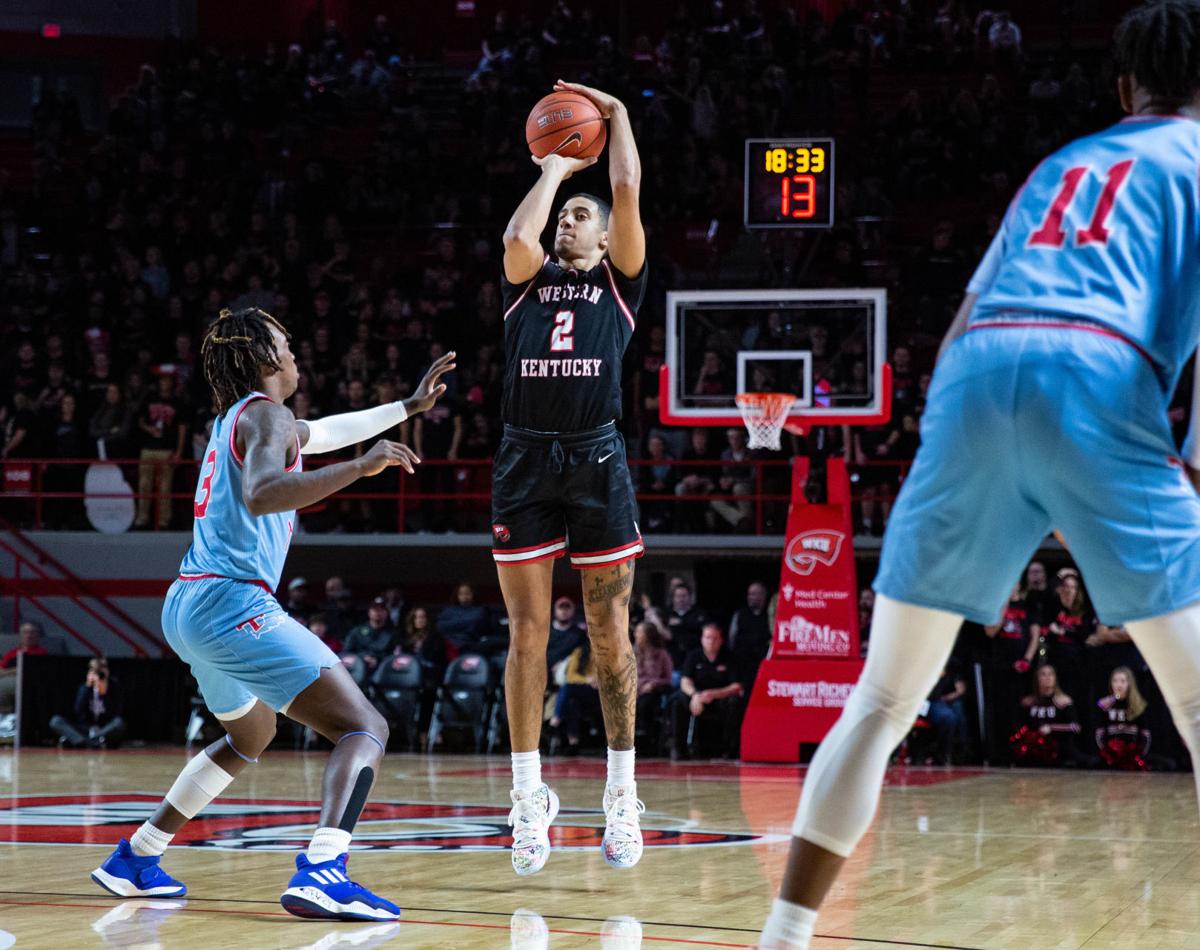 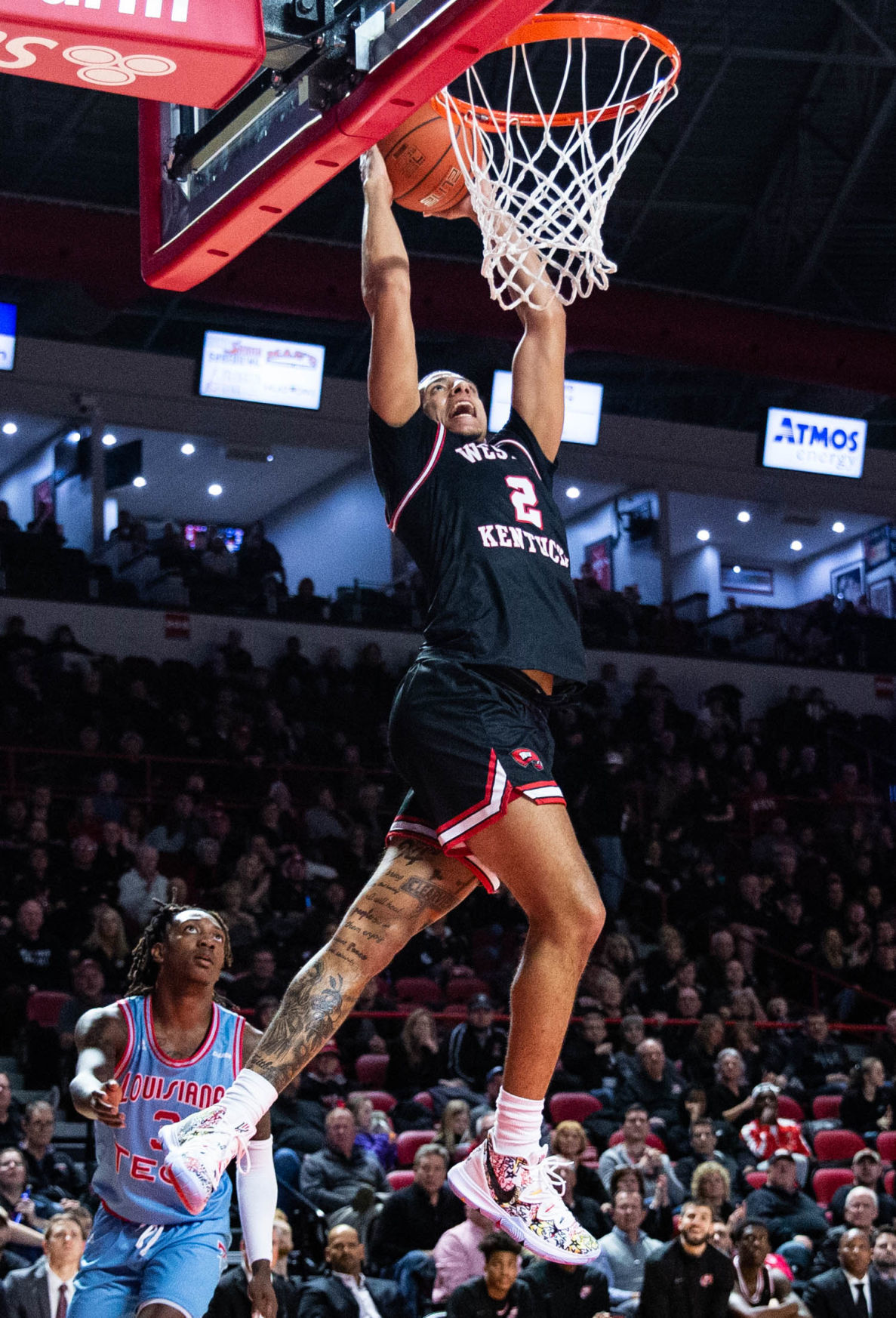 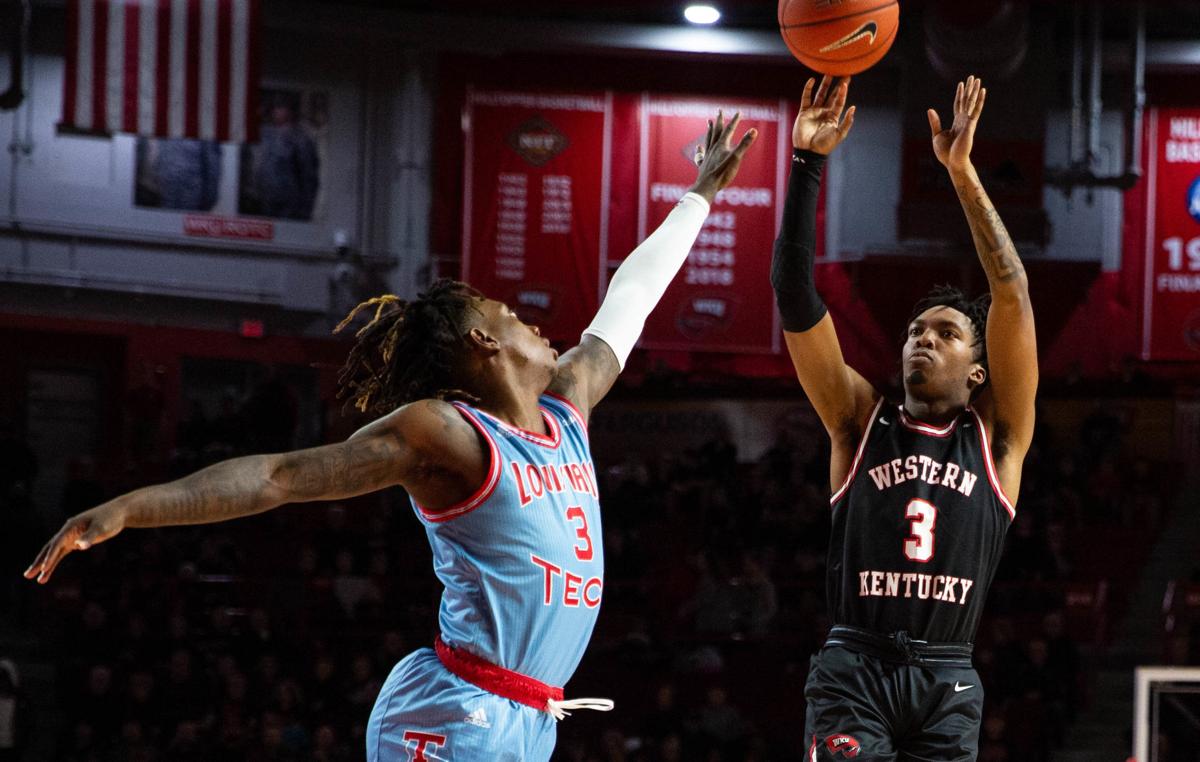 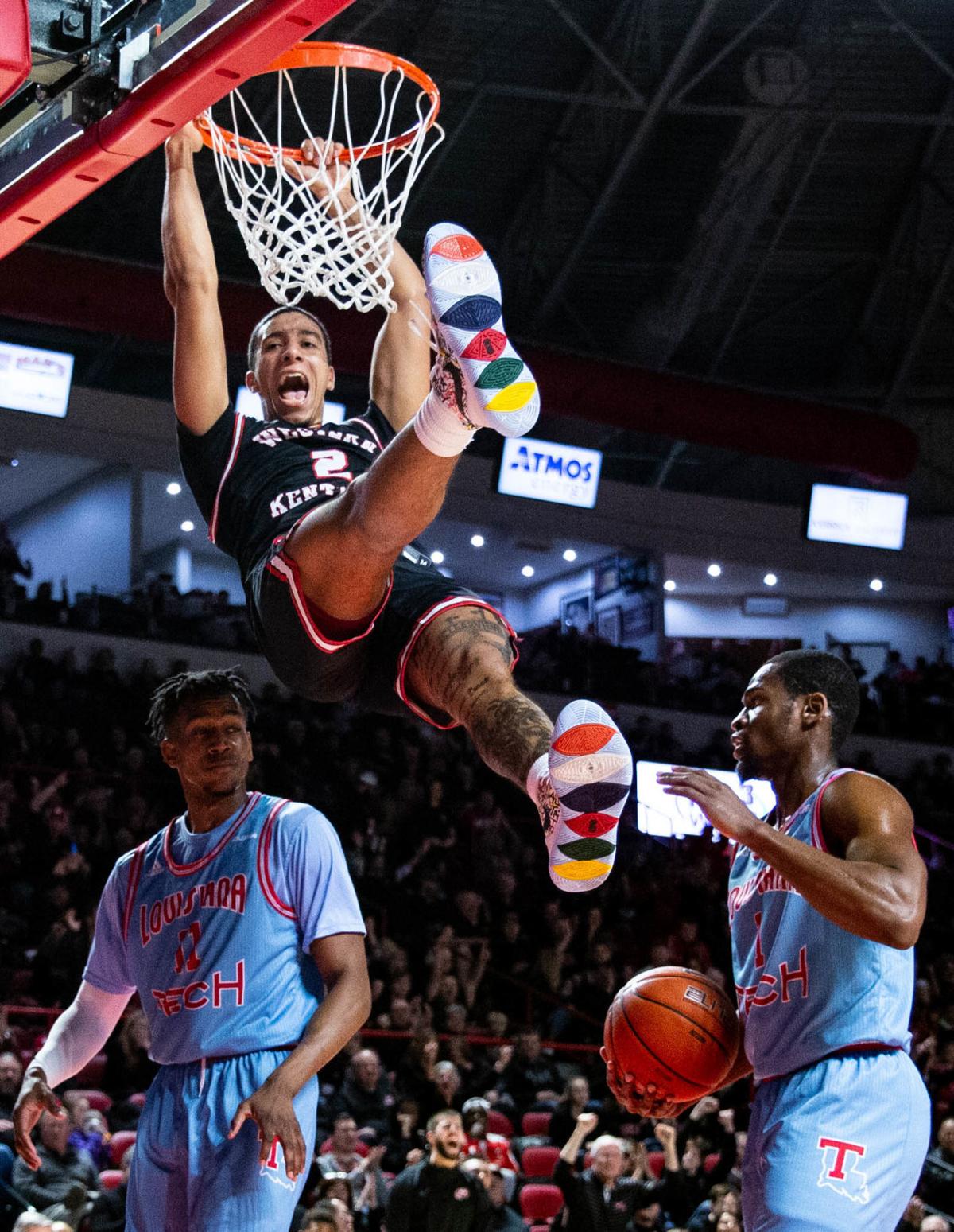 Western Kentucky’s Camron Justice passes the ball before it goes out of bounds in WKU’s 65-54 win against Louisiana Tech on Feb. 6 at E.A. Diddle Arena.

For the second time in less than a month, Louisiana Tech will visit E.A. Diddle Arena for a high-stakes matchup with Western Kentucky.

The first one on Feb. 6 resulted in one of the most dominant halves of the season by the Hilltoppers, who led by 20 at halftime and cruised to a win. It was a late start promoted as a “Blackout Night” with the top of the Conference USA standings on the line.

Coincidentally, that game followed a dismal pair of losses, just like Thursday’s game against the Bulldogs will come right after an uncharacteristic loss by the Hilltoppers on their home floor.

“It was a big game at that point in the season,” redshirt senior Jared Savage said. “This is another big one, so I think we’ll be ready to go come Thursday.”

WKU hosts Louisiana Tech for the second time this season, this time in Bonus Play on Thursday at 7 p.m. (CBS Sports Network) in the final home game of the regular season. WKU (18-9 overall, 11-4 C-USA) sits a half-game ahead of Louisiana Tech (20-7, 11-4) in the C-USA standings, with the Bulldogs’ win at North Texas last Saturday and WKU’s loss to Charlotte narrowing the gap in the race for higher seeding going into the C-USA Tournament.

“We shot it pretty well that game, so you can’t guarantee shooting it well every night,” Savage said. “Defensively, we were good so (we’ll) keep those keys coming in this game and watch a few clips of film and what we did good against them and watch them carry it over.”

WKU’s last game was a perfect example of not resting on previous results to carry over. Charlotte came back to Diddle Arena and led nearly all of its 72-70 win. The Hilltoppers previously defeated the 49ers in January, but a slow start with a slew of turnovers never allowed them to get over the hump on Saturday.

“We can’t get started and dig ourselves a hole,” WKU coach Rick Stansbury said. “We had a bad start and it seemed like we fought uphill the whole night.”

Behind a season-high 26 points, Bulldogs guard DaQuan Bracey hit a driving layup with 1.4 seconds remaining to win it in Denton.

While sitting third in the standings, Bracey and the Bulldogs remain one of the top statistical teams in C-USA with the best scoring defense (62.9 points allowed per game) and three players (Bracey, Derric Jean and Amorie Archibald) shooting at least 39 percent from 3-point range during C-USA play.

Louisiana Tech also is the highest-rated C-USA team in the NET rankings (91st) and KenPom (73rd).

“Very obvious they’re one of the best teams in the league,” Stansbury said. “Just went in and beat the so-called best team on the road. They’re coming in and playing for a lot just like we are.

“It’s big for all those reasons. This time of year, there’s a lot of teams across the country that would still like to be in position to have an opportunity to control your own destiny and playing for championships. We still have that opportunity. It just so happens it’s the last game of the year, happens to be senior night on top of that.”

Savage, guard Camron Justice and forward Matt Horton will play their final home games at Diddle Arena on Thursday. The team will also honor student managers Jacob Hayslip and Evan Stack, who was promoted to the official roster over the weekend.

“It’s bittersweet but senior day behind us, we’re playing for a championship,” Savage said. “You have to get out of your feelings quick.”