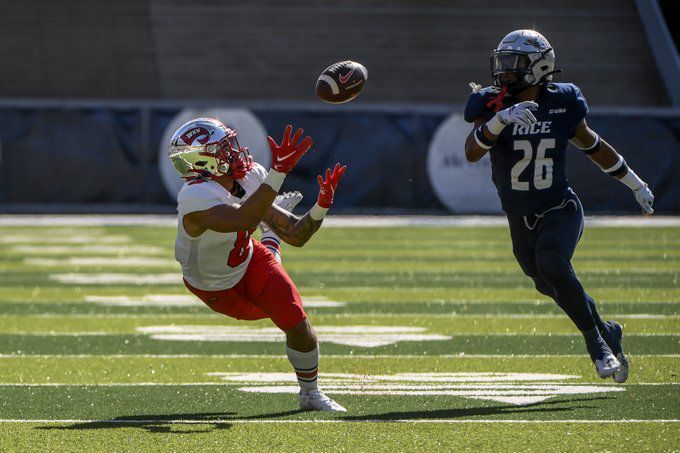 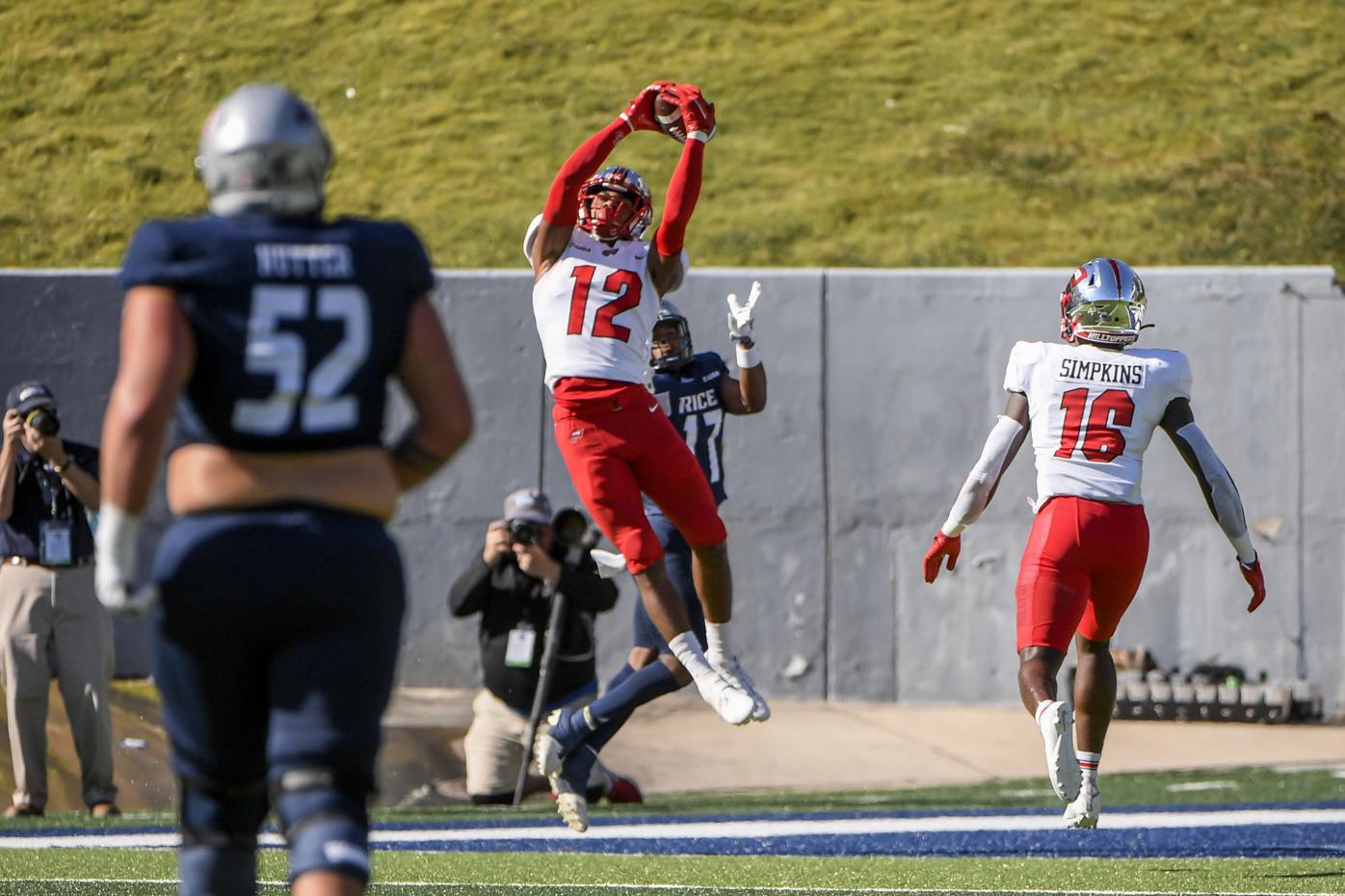 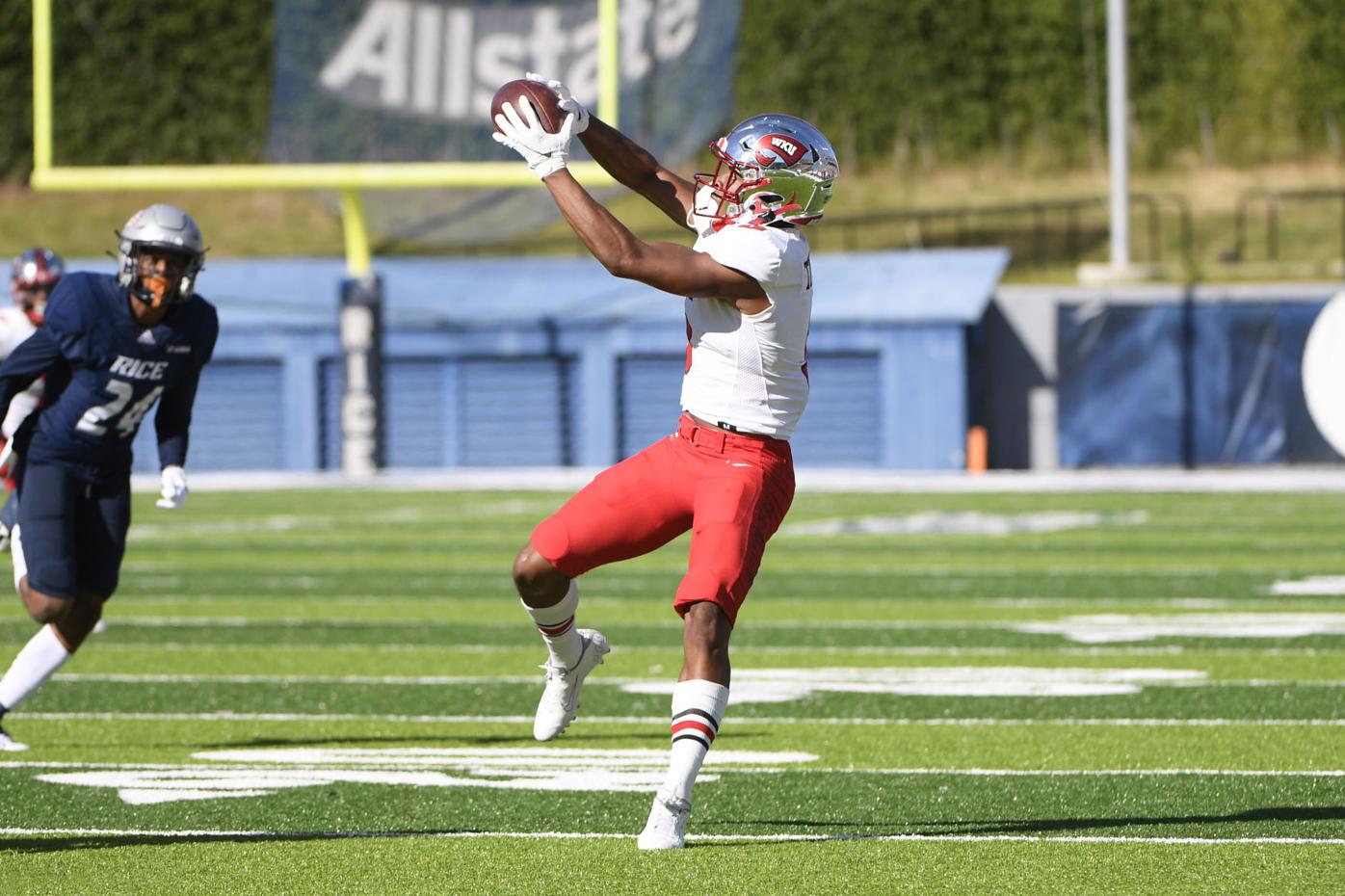 Western Kentucky's Mitchell Tinsley catches a pass Saturday in the first half against Rice at Rice Stadium in Houston.

Western Kentucky's Mitchell Tinsley catches a pass Saturday in the first half against Rice at Rice Stadium in Houston.

HOUSTON – The Western Kentucky football team wants to play as many games as it can, and has put itself in a position to add a couple more to its schedule.

With a 42-21 win over Rice on Saturday at Rice Stadium in Houston, WKU became bowl eligible, but the Hilltoppers aren’t satisfied with that.

“It’s just good to keep winning more than anything. We have goals ahead of us and this was another stop along the way,” WKU head coach Tyson Helton said after the win. “Just really proud of our team and what we were able to do today. It’s great to be bowl eligible, but we have more goals that we want to attain and we need to keep on going.”

In Helton’s first two years as WKU head coach, the Hilltoppers played in the SERVPRO First Responder Bowl, where they beat Western Michigan, and in the LendingTree Bowl, where they fell to Georgia State. Bowl eligibility requirements were waived in 2020 amid the COVID-19 pandemic and the Hilltoppers ended the regular season 5-6, but a strong finish with three straight wins helped them reach the 12th game of the season.

The Hilltoppers claimed a victory over UT Martin in the 2021 opener – the Skyhawks are now 9-1 after a victory over Tennessee Tech on Saturday and ranked in the top 10 of the FCS coaches poll. It followed with nonconference losses at Army, against Indiana and at Michigan State, before falling to still unbeaten and now ranked UTSA in a shootout in its C-USA opener to move to 1-4.

But things quickly turned around.

“Personally, for me, (bowl eligibility is) very exciting, and I know for our team we’re excited about it, but at the same time we’re focused on winning a conference championship,” WKU junior defensive tackle Darius Shipp said.

It took some time for WKU’s new pieces to click together, especially on defense after its tough schedule early – roughly a quarter of the players on the roster were incoming transfers – but the Hilltoppers are firing on all cylinders in recent weeks. WKU’s defense is allowing an average of 18.8 points over the last five games and haven’t allowed more than 21 points, and many of those scores have come late when games were well out of reach. The offense has put up at least 42 points in four of those fives games.

“(Bowl eligibility) means everything because that’s why I came here – to win,” WKU defensive back Kahlef Hailassie, an Independence Community College and Oregon transfer, said. “The ring – that’s the exact reason why I came here. That’s the goal, so we’re going to go get it.”

The Hilltoppers were tied with Marshall atop C-USA’s East Division at 4-1 entering the weekend’s games, but moved ahead of the “Moonshine Throwdown” rivals with Saturday’s results. While WKU came out with a win over Rice, the Thundering Herd fell 21-14 to UAB in Huntington, W.Va., in a rematch of last year’s championship game. The two were picked in the league’s preseason poll to win their respective divisions.

WKU and Marshall are scheduled to close the regular season against each other at Joan C. Edwards Stadium on Nov. 27 in a game that could determine who moves on to the Dec. 3 C-USA championship game. The Hilltoppers haven’t played in the championship game since winning back-to-back titles in 2015 and 2016.

First, however, WKU will face off with FAU next week at Houchens-Smith Stadium and Marshall will travel to Charlotte. The Owls were in the East Division hunt, but fell 30-16 to Old Dominion on Saturday and sit at 3-3 in league play, along with Charlotte, Middle Tennessee and Old Dominion.

UTSA and UAB are leading the West Division with 6-0 and 5-1 marks, respectively – the Blazers’ loss came at home to Rice – and the two programs are set to face off this weekend in San Antonio in a game that could decide who will play for the title.

“(Bowl eligibility) is something we’ve worked for all year. Of course, it’s not our end goal. We want that conference championship,” said WKU receiver Mitchell Tinsley, who had 10 receptions for 198 yards and two touchdowns in Saturday’s win. “We have two regular-season games left against two quality opponents, so I feel like we’ve just got to take it one game at a time and just do what we do.”

After a tough stretch to begin the year, WKU still has its goals well within reach, and while happy they are bowl eligible once again, the Hilltoppers aren’t satisfied.

“They’re men of character. They just go out and compete and they don’t worry about the things that are not in their control. They just go out there on the field and try to win football games,” Helton said. “I knew once we kind of got that rough patch out of the way there, I knew we could go on a roll, our team knew that and we’ve got a big one coming up again this week, so we’ve got to keep it rolling.”{&end}