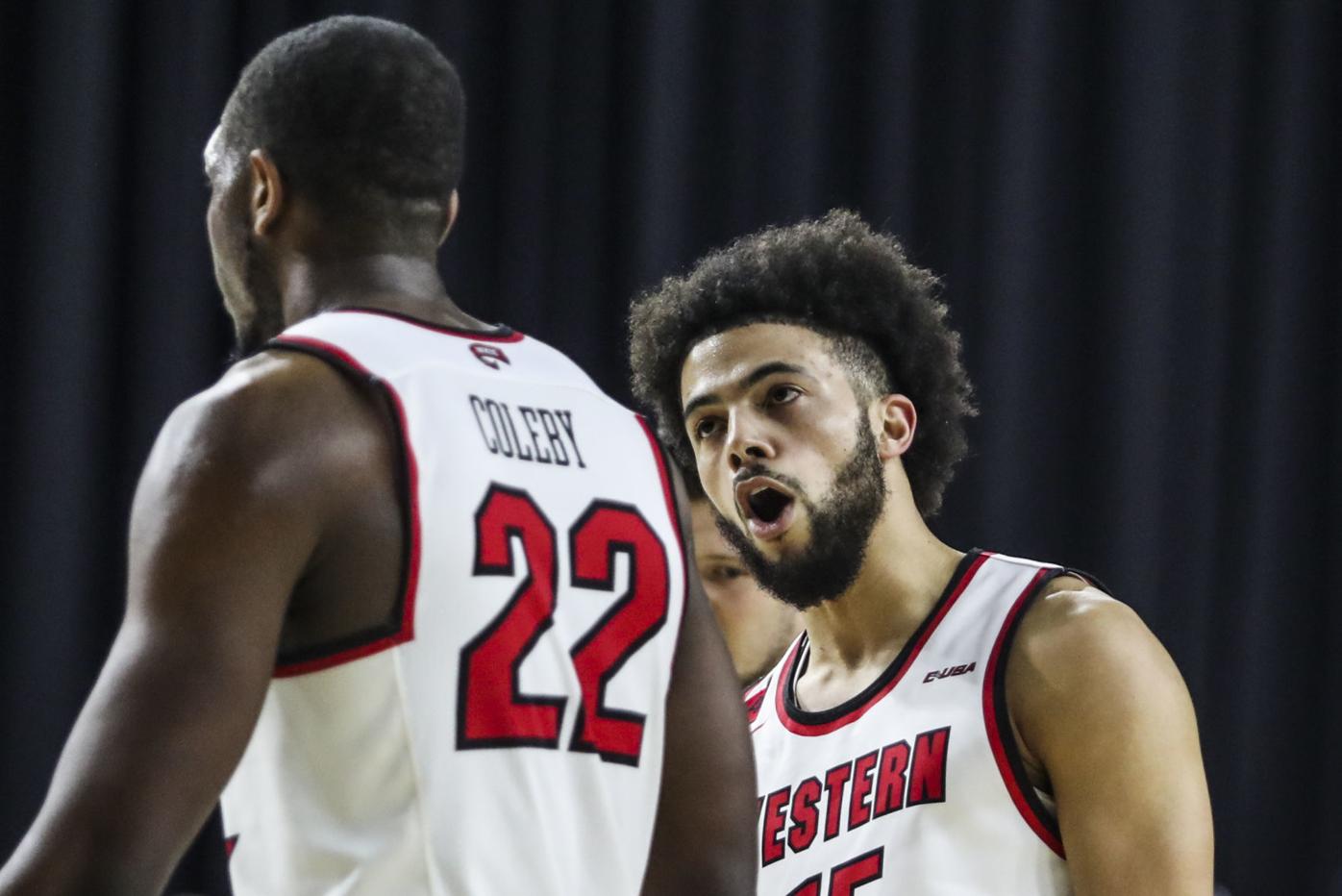 Above: Western Kentucky guard Darius Thompson (right) talks to WKU forward Dwight Coleby during the Hilltoppers’ 67-66 loss to Marshall in the Conference USA Tournament championship Saturday at The Star in Frisco, Texas. Below: WKU’s Justin Johnson (right) defends as Marshall’s Jon Elmore drives to the goal for a layup Saturday. 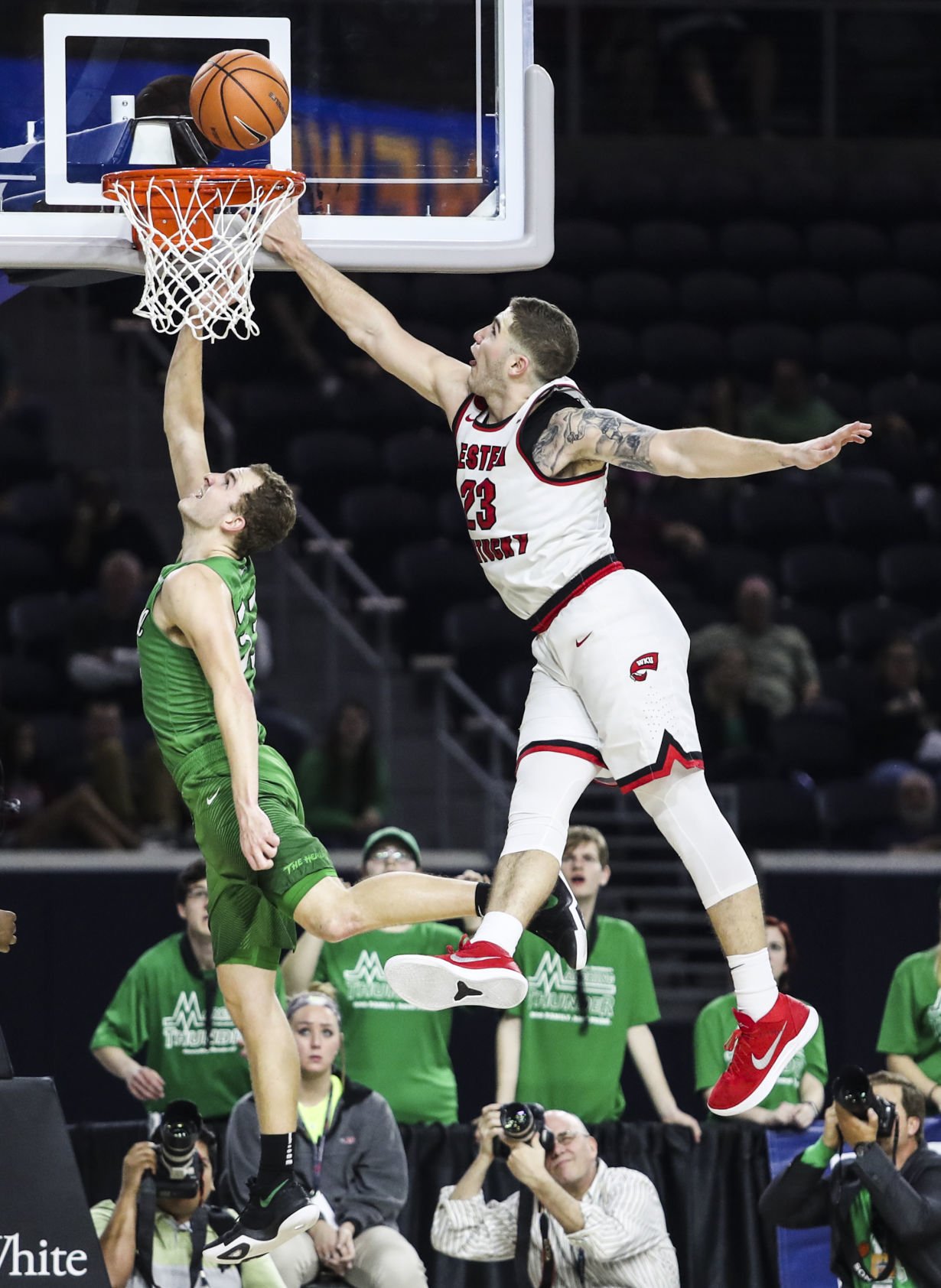 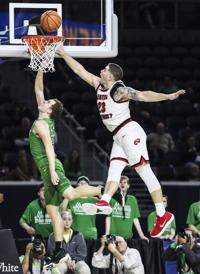 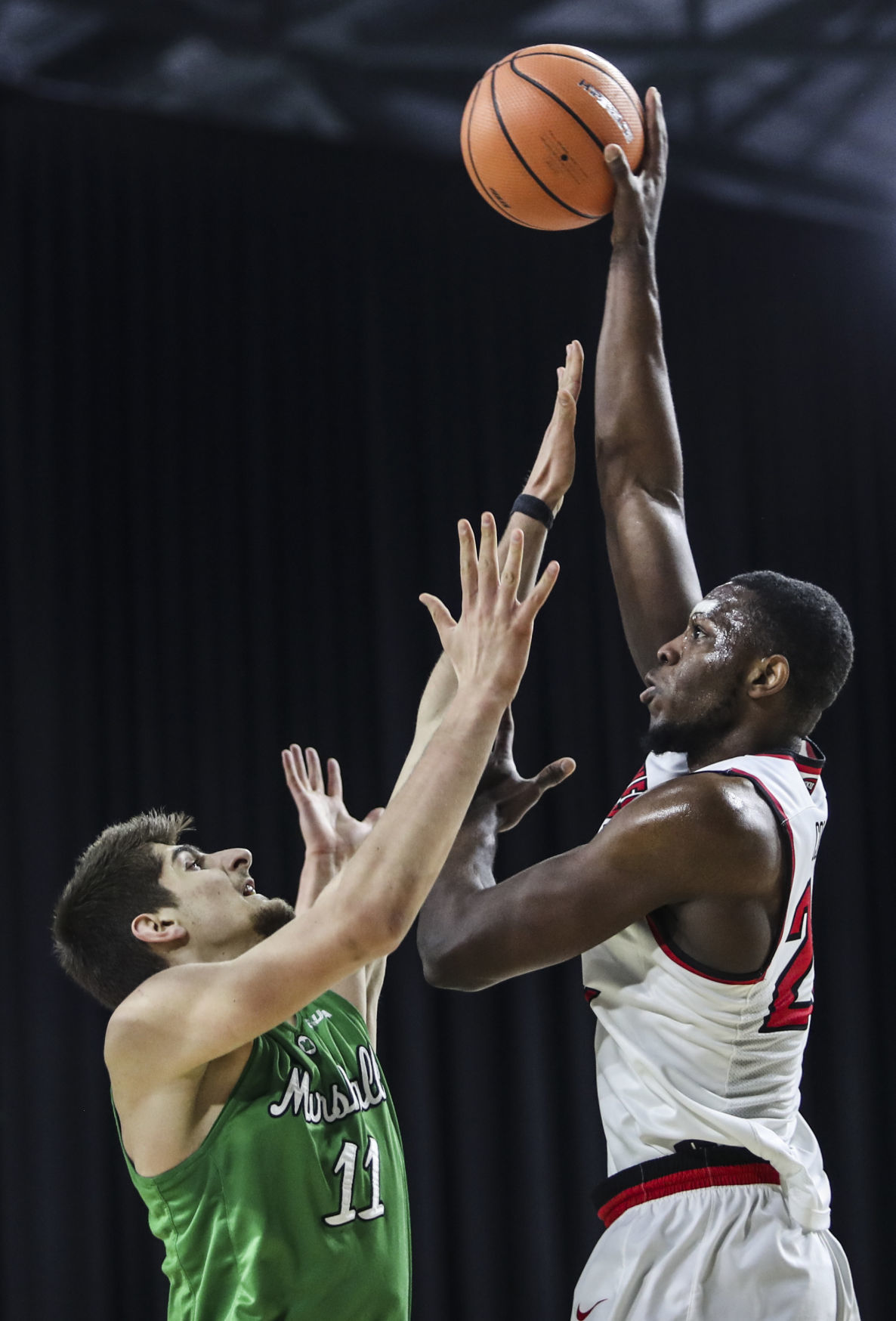 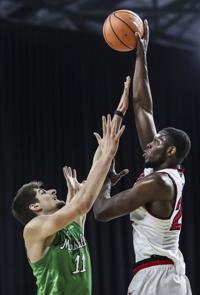 Above: Western Kentucky guard Darius Thompson (right) talks to WKU forward Dwight Coleby during the Hilltoppers’ 67-66 loss to Marshall in the Conference USA Tournament championship Saturday at The Star in Frisco, Texas. Below: WKU’s Justin Johnson (right) defends as Marshall’s Jon Elmore drives to the goal for a layup Saturday.

Western Kentucky will get a chance to play at least one more basketball game, and Hilltopper fans also have a chance to see the team play once more on its home court.

WKU was selected Sunday to participate in the 32-team National Invitation Tournament. The No. 4 seed Toppers (24-10) will host No. 5 seed Boston College (19-15) in a first-round matchup at E.A. Diddle Arena. Tipoff is set for 7 p.m. Tuesday, with the game streamed by ESPN3.

WKU’s NIT berth marks the program’s first postseason appearance since the 2013 NCAA Tournament. It’s the Hilltoppers’ first trip to the NIT since 2006.

The announcement came 24 hours after the Tops dropped a 67-66 heartbreaker to Marshall on Saturday night in the Conference USA Tournament championship game.

WKU trailed 67-55 with less than four minutes to play, then made a furious comeback and scored the game’s final 11 points. Guard Lamonte Bearden’s attempt in the final seconds at a go-ahead basket went in-and-out, and the Thundering Herd held on for the one-point win.

WKU’s hopes for a C-USA title and NCAA berth were extinguished with that loss in Frisco, Texas. But the NIT bid gives the Hilltoppers a shot at creating some more positive memories before the 2017-18 season ends.

“Saturday night was tough, to come that close, literally one possession, one shot away from the NCAA Tournament and the opportunities that would bring,” WKU athletic director Todd Stewart told the Daily News on Sunday night. “I just would’ve hated for that to be the final chapter in this team’s book.

“Now the fact we get to continue in a very prestigious tournament against an ACC team in Diddle Arena is really good for everybody.”

The Toppers’ at-large hopes for the NCAA Tournament were a longshot largely due to their five Quadrant 3 losses, including road defeats against Ohio (RPI No. 204) and Texas-San Antonio (RPI No. 186).

The NIT committee still found things to like about WKU’s resume, highlighted by a neutral-court win over Purdue (RPI No. 9).

“It was great to see the respect that the committee obviously had for the body of work this team had this season,” Stewart said. “For us to be a No. 4 seed and host an ACC team is certainly a sign of respect.”

Boston College went 7-11 in ACC regular-season play this season, winning two league tourney games before bowing out against Clemson in the quarterfinals. The Eagles’ season was highlighted by a Dec. 9 upset of then-No. 1 Duke.

Boston College coach Jim Christian was previously a Hilltopper assistant from 1990-92 under Ralph Willard and again from 1994-95 under Matt Kilcullen. Christian was also the coach for Kent State when WKU beat the Golden Flashes at Diddle Arena in the 2005 NIT.

Christian’s staff includes assistant Chris Cheeks, who was a Topper assistant under Rick Stansbury in the 2016-17 season.

The winning team Tuesday night at Diddle Arena will face the winner of another Tuesday matchup between No. 1 seed Southern California and No. 8 seed North Carolina-Asheville. Second-round games will be played sometime between Friday and March 19.

“I know this team is one that our fans have really enjoyed watching and cheering for,” Stewart said. “They’ve won 24 games and the fact they can keep playing is something that everybody’s excited about.”

Single-game tickets for Tuesday’s matchup are available at WKUTickets.com.

Chair-back seats will be $25, while bleacher seating will be $15. Student tickets are free courtesy of WKU athletics.

Season-ticket holders are encouraged to purchase their seats online through their account manager to avoid lines and wait time through the WKU Ticket Office. The ticket office will have extended phone hours until 6 p.m. Monday.

Season-ticket holders will have first priority to their seats through 8 a.m. Tuesday.{&end}