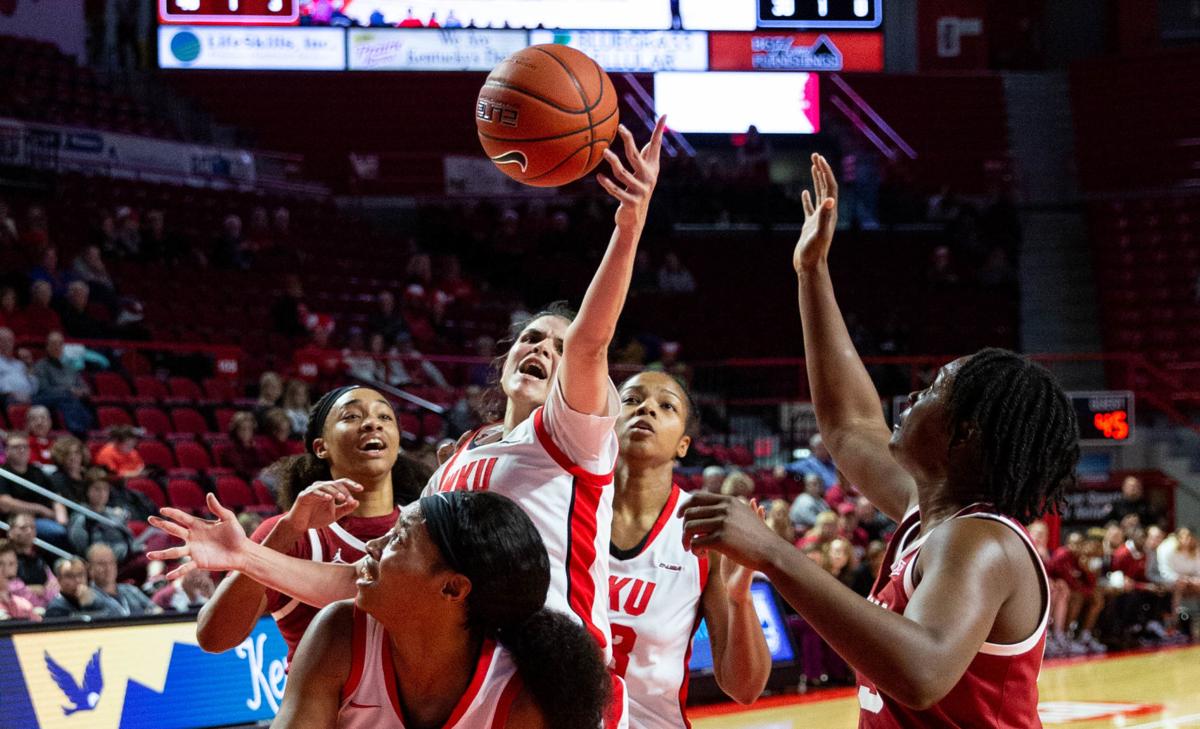 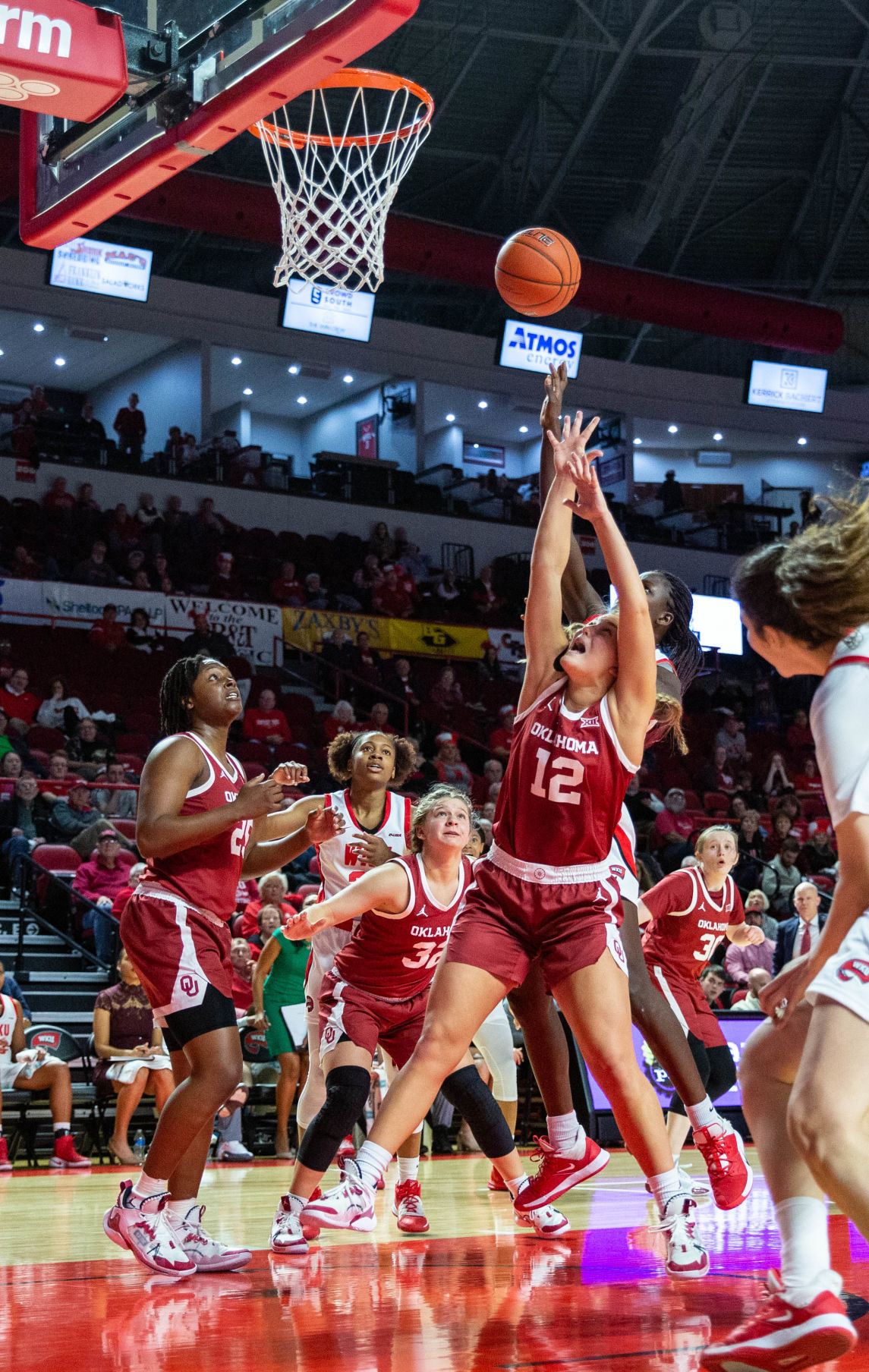 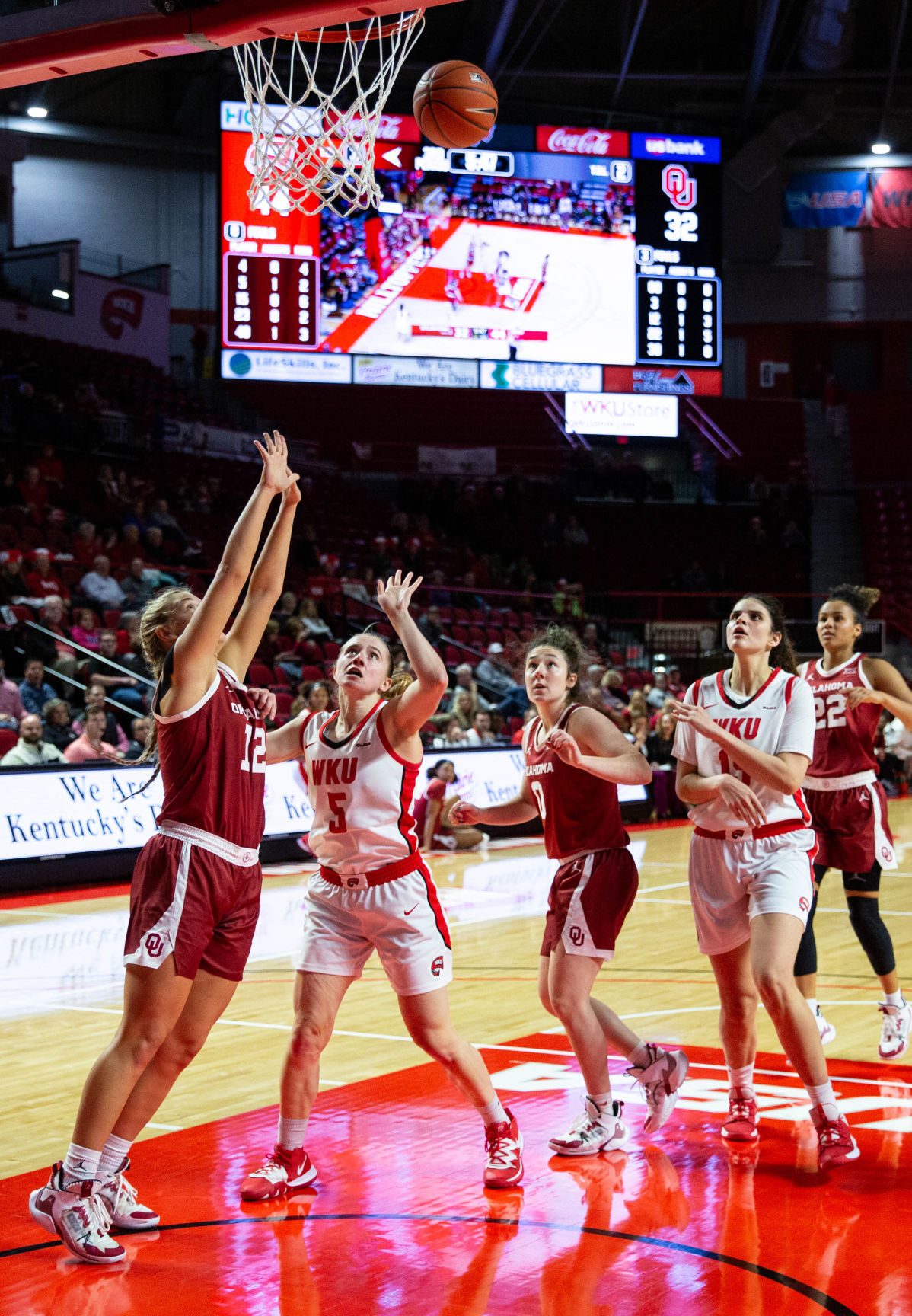 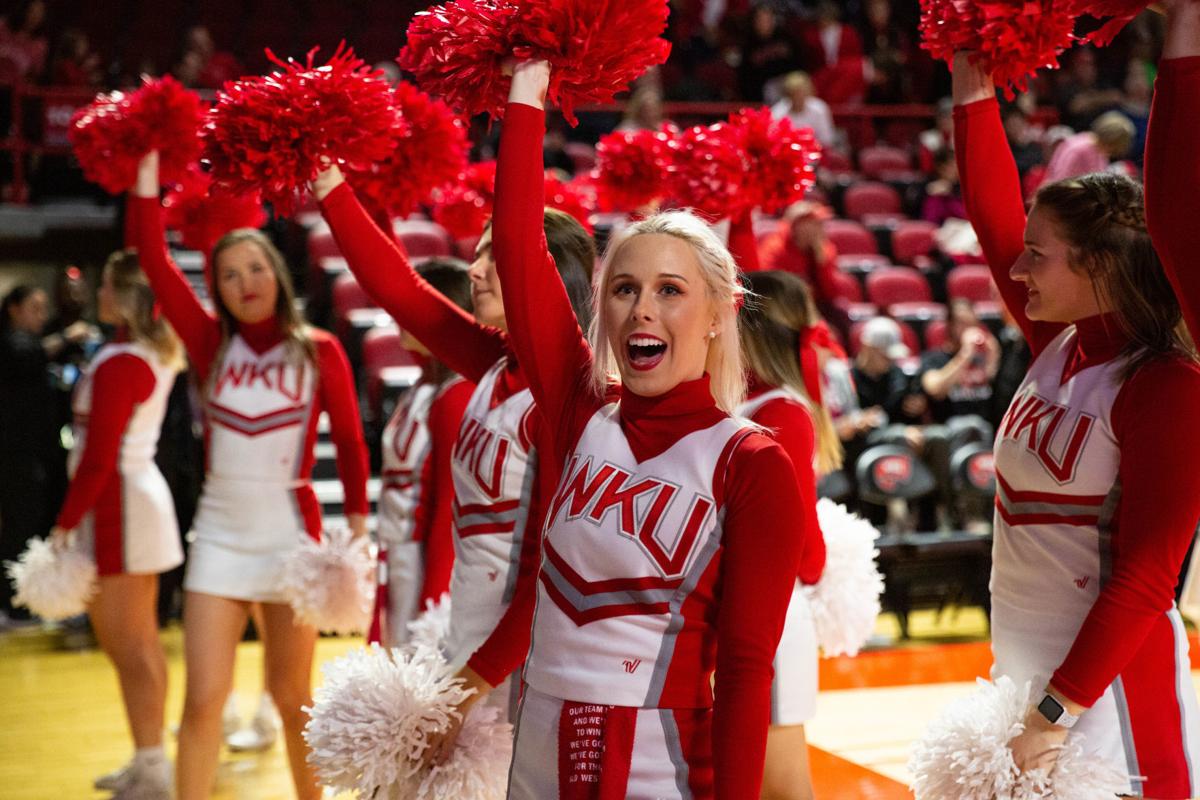 Western Kentucky cheerleaders lead the audience in a cheer during WKU's game against Oklahoma on Wednesday, Dec. 4, 2019, at E. A. Diddle Arena. (Grace Ramey/photo@bgdailynews.com) 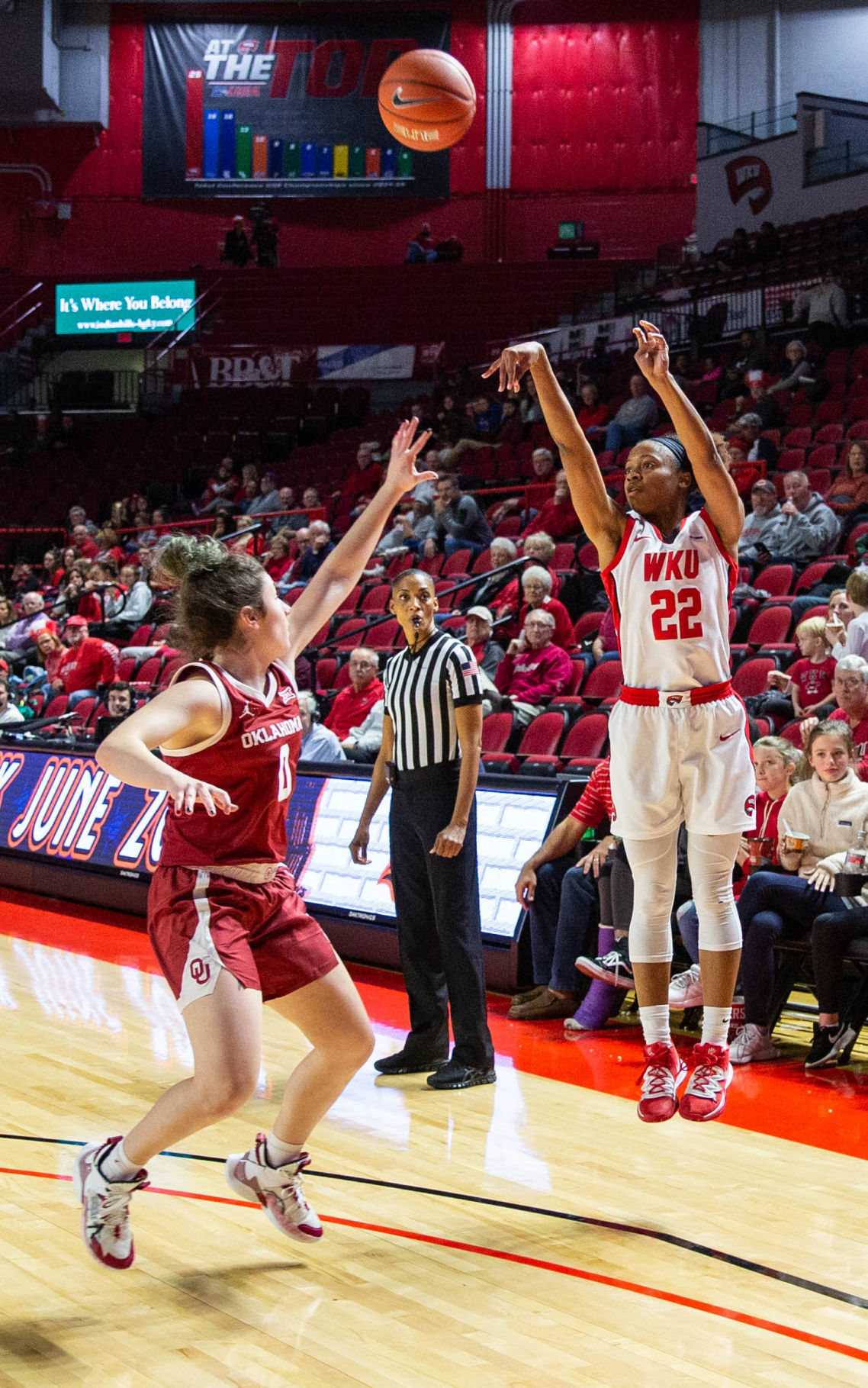 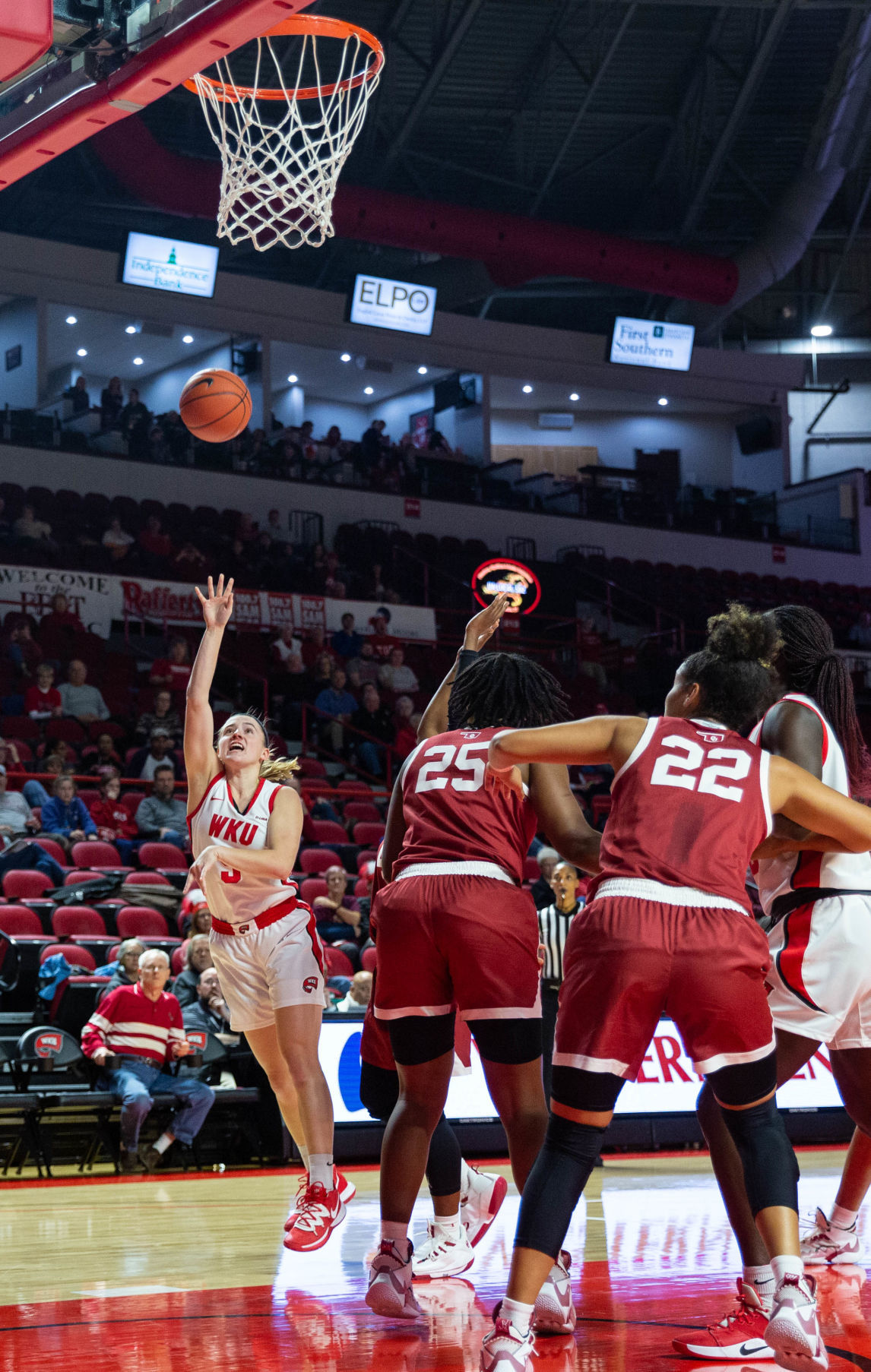 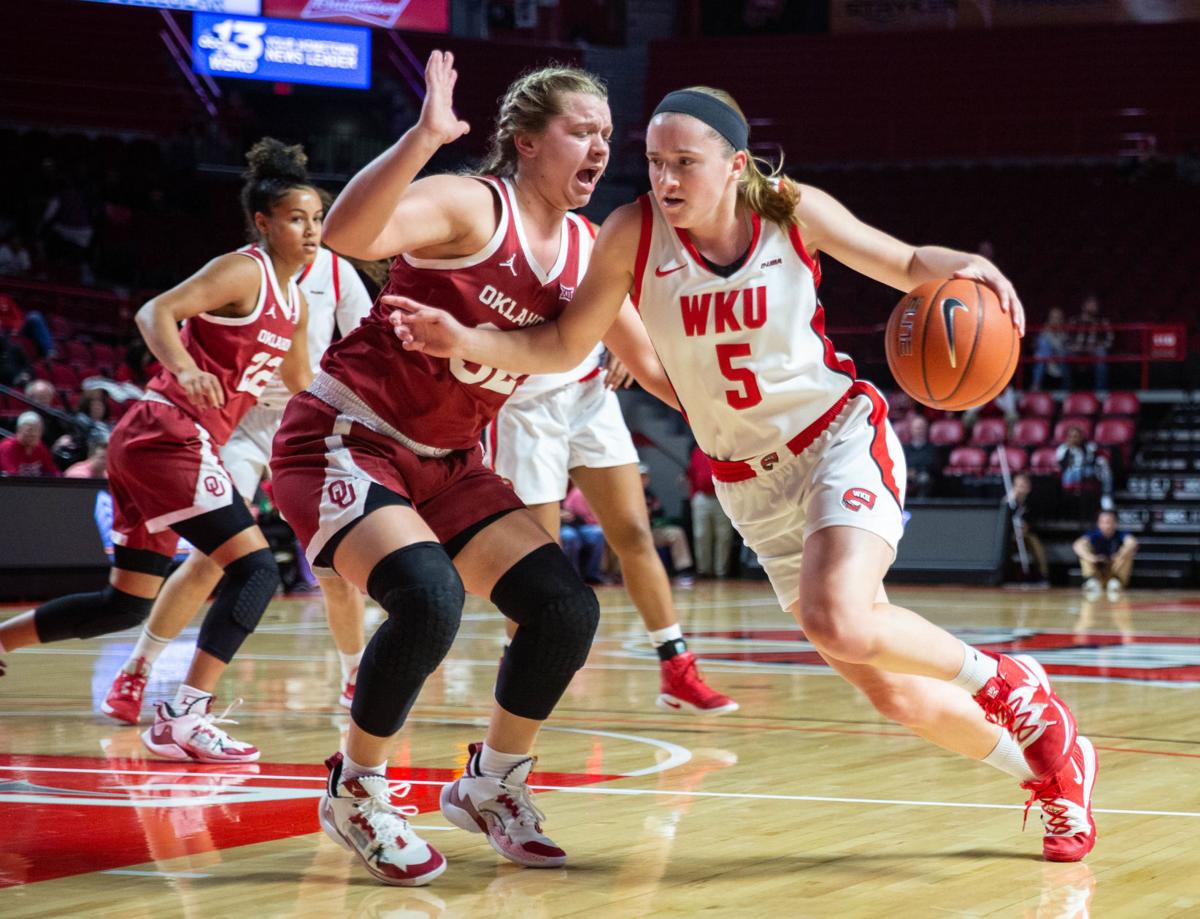 Western Kentucky cheerleaders lead the audience in a cheer during WKU's game against Oklahoma on Wednesday, Dec. 4, 2019, at E. A. Diddle Arena. (Grace Ramey/photo@bgdailynews.com)

Greg Collins said he felt like the opening act at a big concert.

And his Western Kentucky women’s basketball team put on a pretty good show.

The Lady Toppers opened a week at E.A. Diddle Arena that will feature first and second-round NCAA Tournament volleyball matches and a men’s basketball game against Arkansas with a 74-63 victory over Oklahoma on Wednesday.

“I think this kind of defines our team at this point. We needed a big win, not just for our confidence, but for everybody that’s going to realize ... I told the kids, ‘People are going to realize that you’re legit now,’ “ Collins said. “(Oklahoma) has, in the last 20 years, has been one of the most solid basketball programs in the whole country and I think they went to 19 NCAA Tournaments out of the last 20 years, which is pretty phenomenal.

“As far as a win for this program? We’ve had big wins here. Western Kentucky – we’ve had some wins. In the big scheme of things, this is just another one, but for me and this team right now, this is a big one for us to win at home in front of our home fans and really keep moving that bar forward.”

WKU (6-2), which was coming off an overtime loss to Saint Mary’s at the Saint Mary’s Thanksgiving Classic on Saturday after beating Tulsa in the first game of the event the day before, used a strong defensive performance to beat the Sooners (4-4). The Lady Toppers forced 31 turnovers and held an offense that came in scoring 81.6 points per game well below its average.

“Our focus was to put pressure on the passer,” Collins said. “A lot of people talk about putting pressure on the ball. We were really focusing on pressuring the passer because they get a lot of free passes down the court, so we were really trying to make sure that passer had something else to worry about all night.”

The biggest turnover came in the final five minutes. Oklahoma used an 11-1 run early in the fourth quarter, highlighted by and-ones from Gabby Gregory and Madi Williams, to cut WKU’s lead to three after it had grown to 18 with 4:42 to play in the third.

WKU got the lead back out to six and, on an Oklahoma inbound attempt, the Lady Toppers came up with a steal that resulted in an and-one from Whitney Creech to make it a nine-point game and stalled the Sooners’ momentum with 4:04 remaining. Creech finished with 17 points and WKU was led by Raneem Elgedawy’s 23 points and nine rebounds.

“I know on that play they kind of ran it a couple of times, so I knew they were going to lob it over the top and I was able to get my hand on it and Dee (Givens) was able to pick it up, and we just kind of took off and were off to the races,” Creech said.

WKU outscored Oklahoma 7-5 from that point to close out the 11-point victory – the program’s first win over a Power Five opponent since opening the 2017-18 season with a 79-76 victory over No. 16 Missouri in the Hawkeye Challenge. It’s the second of three Power Five opponents on WKU’s schedule this season. The Lady Toppers fell to Louisville in the opener and are scheduled to travel to Purdue on Dec. 18.

Oklahoma scored the first five points and eventually took a 16-12 lead into the second, where Givens opened the frame with back-to-back 3-pointers to put WKU up 18-16 on her way to an 18-point night. WKU didn’t trail for the remainder of the contest.

The Lady Toppers got the lead to as many as five twice in the first half – once with 2:27 to play on Givens’ third 3-pointer and again with 1:38 to play on a pull-up jumper from Creech – but went into halftime with just a one-point advantage.

A layup from Meral Abdelgawad and a 3-pointer from Sherry Porter book-ended a 9-0 run to start the second half, giving WKU a double-digit lead. The Lady Toppers’ lead stretched to 18 at the 4:42 mark in the third on a free throw from Givens, but Oklahoma was able to cut its deficit to 11 by the end of the frame with the help of three 3-pointers from Taylor Robertson.

Robertson was named Big 12 Co-Player of the Week after back-to-back 20-plus point performances last week, including a 30-point performance that featured nine 3-pointers in a loss to Wichita State. Robertson entered as the NCAA’s active leader in career 3-point percentage at 48.8 percent (144-for-298) and finished Wednesday with 14 points. She was limited to a combined five points in the first, second and fourth quarters, with three coming in the final minute.

“She was the No. 1 3-point shooter in the nation,” Givens said. “She can light it up, so that was our focus and I think the first half we really keyed on her really well – she didn’t make any 3s I don’t think – so I think that gave us a little boost and then in the second half we tried to do the same thing.”

Ana Llanusa led Oklahoma with 19 points, Gregory had 11 and Nydia Lampkin had 10. Oklahoma will host LSU on Saturday.

WKU will now hit the road for its next five games, starting Saturday at Ball State in a 2:30 p.m. contest. It’ll be followed by games at Samford, Purdue, North Texas and Rice, before returning home Jan. 9 against UAB.{&end}

Western Kentucky had beaten teams it wasn’t necessarily supposed to before.