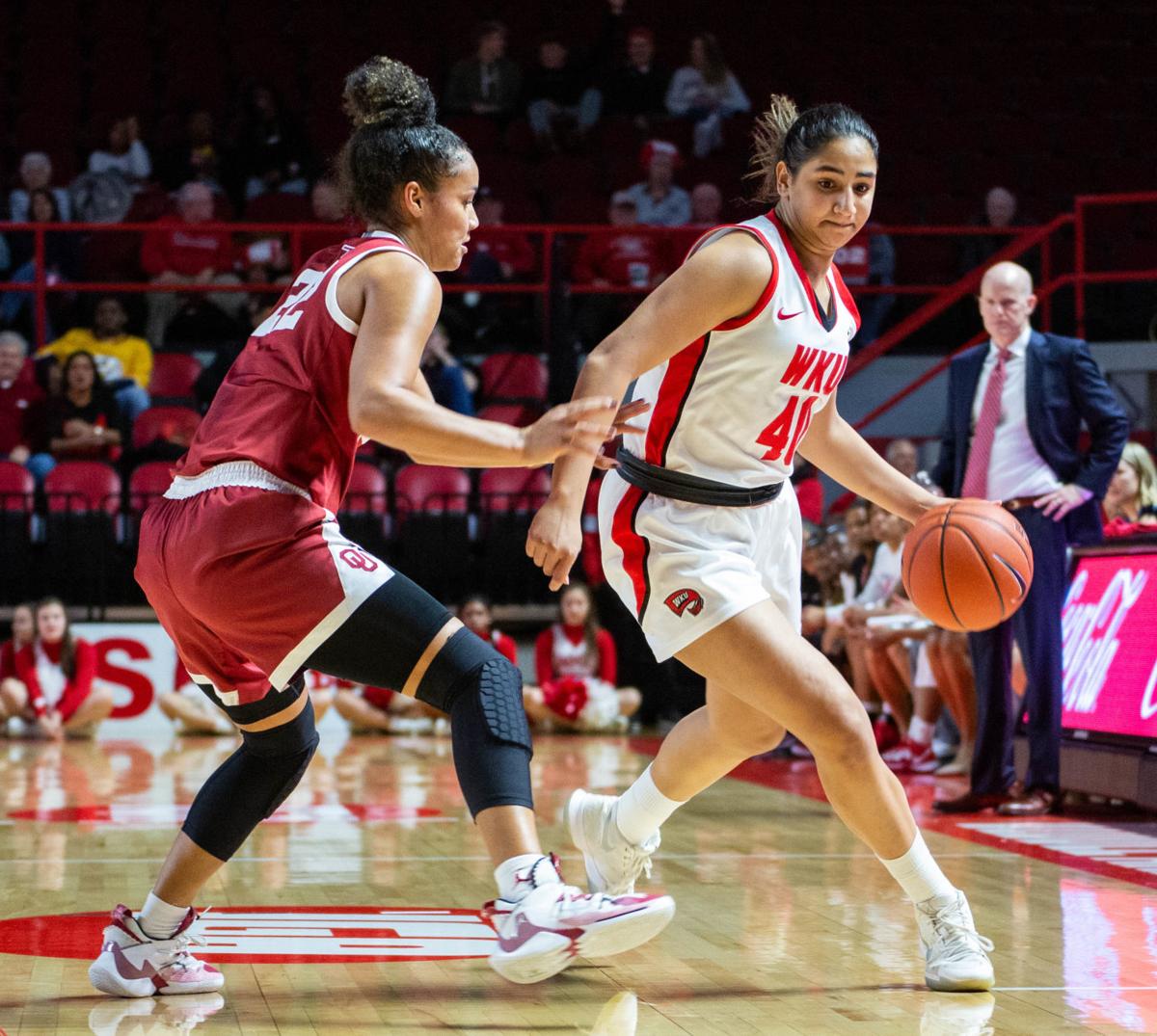 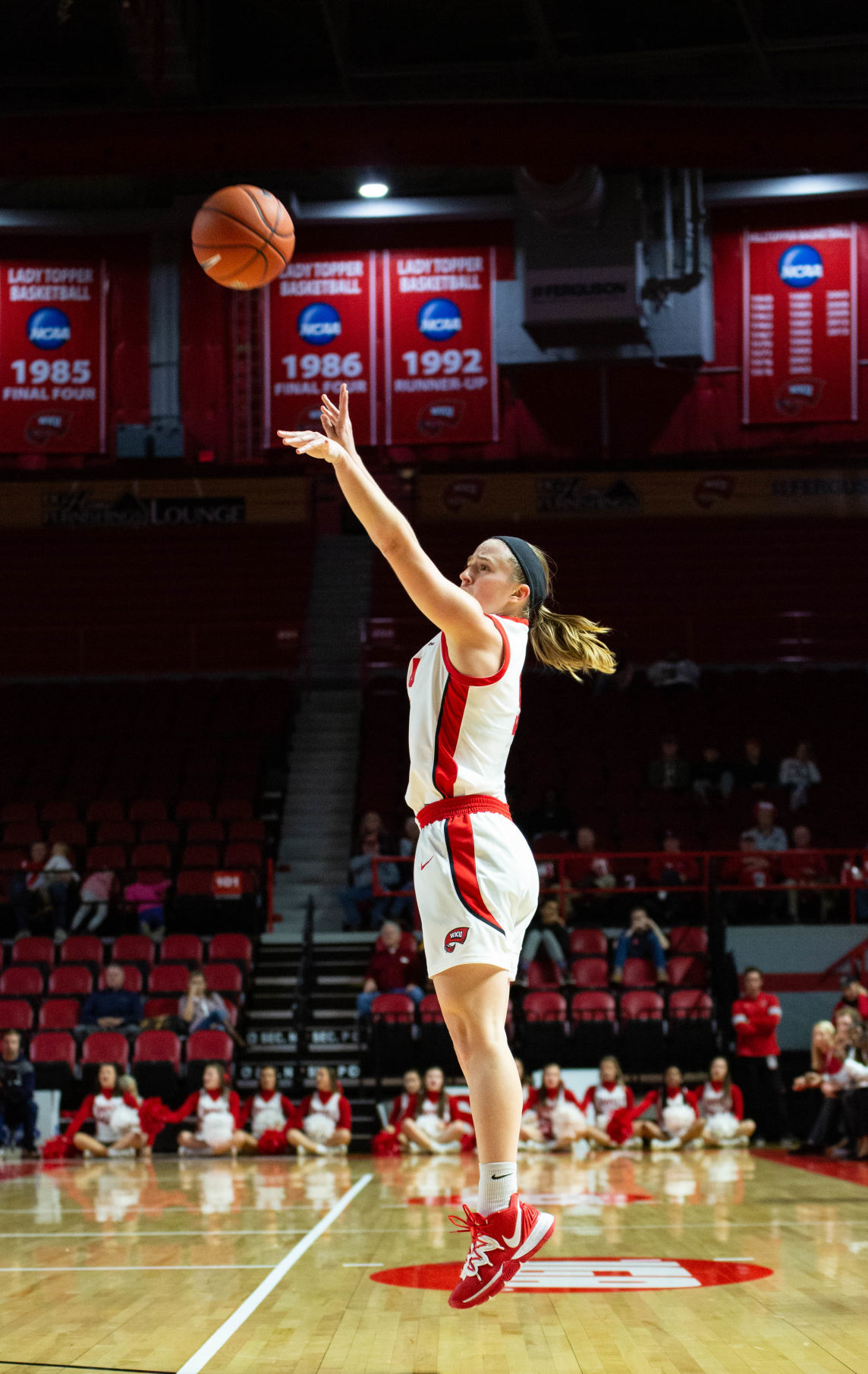 Western Kentucky had beaten teams it wasn’t necessarily supposed to before.

So when an Oklahoma team WKU had never beaten before came to E.A. Diddle Arena on Wednesday, the Lady Toppers weren’t about to back down. For Greg Collins’ experienced bunch, the focus remained inward, and the result was a 74-63 win to move to 6-2.

“It’s always a big win when you get it over a Power Five school, but coming into this game, we really weren’t paying attention to the name across their chest,” WKU senior point guard Whitney Creech said. “We were just focusing on us and focusing on what we needed to do to get better and win this basketball game.”

Prior to Tuesday’s practice, Collins credited his team’s toughness for battling back from a 16-point deficit to force overtime in a loss to Saint Mary’s at the Saint Mary’s Thanksgiving Classic on Saturday. It was the second game in two days, and the Lady Tops were without Myriah Haywood, the team’s leader in minutes off the bench in the early stages of the season, because of a concussion sustained the day before in a win over Tulsa. Creech and Dee Givens each played over 40 minutes in the latter contest, while Raneem Elgedawy and Meral Abdelgawad each played over 37.

WKU didn’t start great against the Sooners (4-4), but Collins credited his team for getting tougher when it needed to Wednesday. Oklahoma held a 16-12 advantage at the end of the first quarter. The Lady Toppers shot just 25 percent (4-of-16) from the field and were 0-of-3 from 3-point range in the frame. They also had seven of their 19 turnovers during the opening 10 minutes.

“(Oklahoma) came out in the first quarter – you can watch film, you can talk about it, you can prepare for it, but until you’re in a fistfight, you don’t know what it feels like to get punched – so they came out and they were real physical with us,” the second-year WKU head coach said. “We kind of shied away from some loose balls, some rebounds, some defensive mistakes we made. We shied back from them, so we had to be a little bit stronger and tougher with the ball and I was real proud of how we came back out and responded to that.”

The Lady Toppers were still without Haywood, who Collins called one of the most athletic players in Conference USA following the team’s 77-58 win over Little Rock on Nov. 24, on Wednesday going up against a fast-paced Big 12 offense that averaged nearly 82 points per game. They were also without Elgedawy for the final 3:29, after she was carried off the court with an injury. Collins said following the game she turned her ankle and expects her to be “good to go.”

Despite that, WKU held the Sooners roughly 19 points below their season average and forced 31 turnovers by pressuring the passer to come away with a double-digit win. The number of turnovers were the most WKU had forced since turning over FIU 31 times on New Year’s Day 2017. The Lady Toppers had 14 steals Wednesday, led by Sherry Porter’s career-high five.

“I think, for the most part, we did a pretty good job in that respect. A lot of credit to Dee Givens and Sherry Porter for doing that all night long,” Collins said. “We’re a little shorthanded. We’ve got some injuries and some illnesses we’re working through, but the kids that played tonight played their guts out.”

In WKU’s four wins leading up to the trip to Moraga, Calif., the team outscored its opponents 178-103 in the second half. The Lady Toppers started the second half Wednesday on a 9-0 run to get their lead to double digits, and it started on the boards. WKU outrebounded Oklahoma 6-1 during the stretch, with half coming on the offensive glass. The Lady Toppers outrebounded the Sooners 42-41 in the game, with an even 21-21 split between offensive and defensive rebounds.

“I think the past couple of games we’ve got off to a bad start in the second half, so coach Collins was really harping on us to be tough, be tougher, box out and rebound. That’s the biggest thing he talked about to us, was rebounding,” Creech said. “We’re on that 9-0 run, he said they didn’t get one offensive rebound. That was the big key. We were able to box out and get some boards and that led us in transition to some easy buckets.”

Collins credited his team’s maturity for not allowing Belmont and Central Michigan to come back during the second half of back-to-back 30-plus point victories, and his team’s experience showed again against the Power Five opponent.

Oklahoma went on an 11-1 run early in the fourth quarter to cut WKU’s lead to three after it had grown to 18 midway through the third, but the Lady Toppers held off the rally for the program’s first win over a Big 12 school since Jan. 11, 1990.

“That’s nice to have Whitney Creech and Raneem and Dee and Sherry Porter and kids that have been in this situation before and they’re hungry to prove how good they are,” Collins said. “I never felt like we were in danger of losing the ballgame, even when they cut the lead down to single digits. I felt like we just had to keep grinding and we had to keep doing what we’re doing and we’ll turn this back in our favor.

“I told them in the huddle you didn’t have to win by two, or by 20, or by 200. It didn’t matter. We just had to keep playing our game and focusing on what we have to do along the way and then that’ll take care of the result by itself.”

WKU’s toughness and experience will be put to the test again in the upcoming weeks. Wednesday’s contest was the last at Diddle until Jan. 9. Saturday’s game at Ball State will mark the first of five straight games on the road. It’s a stretch that also features another Power Five team in Purdue, which received votes in the latest Associated Press poll, as well as conference games at North Texas and Rice.

“It’s always good to win at home. Great teams win at home, and that’s what we’re trying to be this year,” Creech said. “This win kind of gives us some momentum going into our road trips. We’ve got some tough games on the road, so we’re just trying to carry this play over and just improve and get better each and every day.”{&end}

Greg Collins said he felt like the opening act at a big concert.