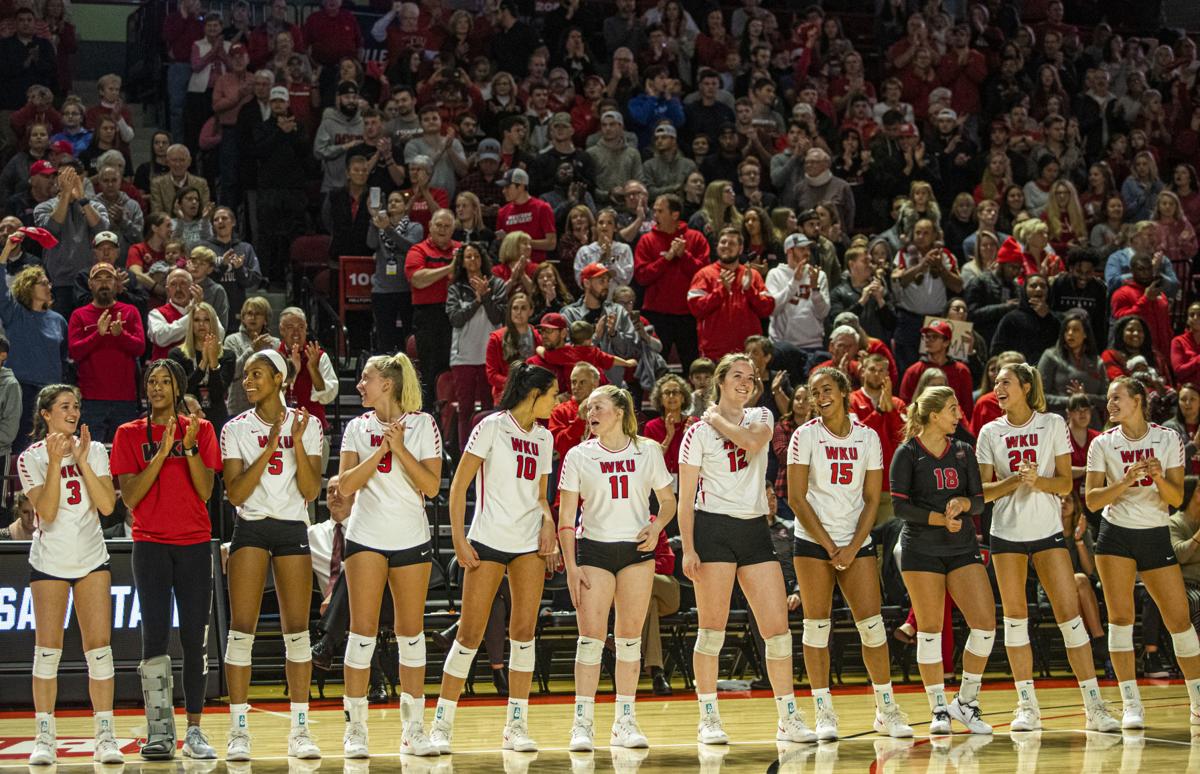 The crowd cheers as Western Kentucky players are announced before their NCAA Tournament first-round match against Kennesaw State on Thursday at E.A. Diddle Arena. 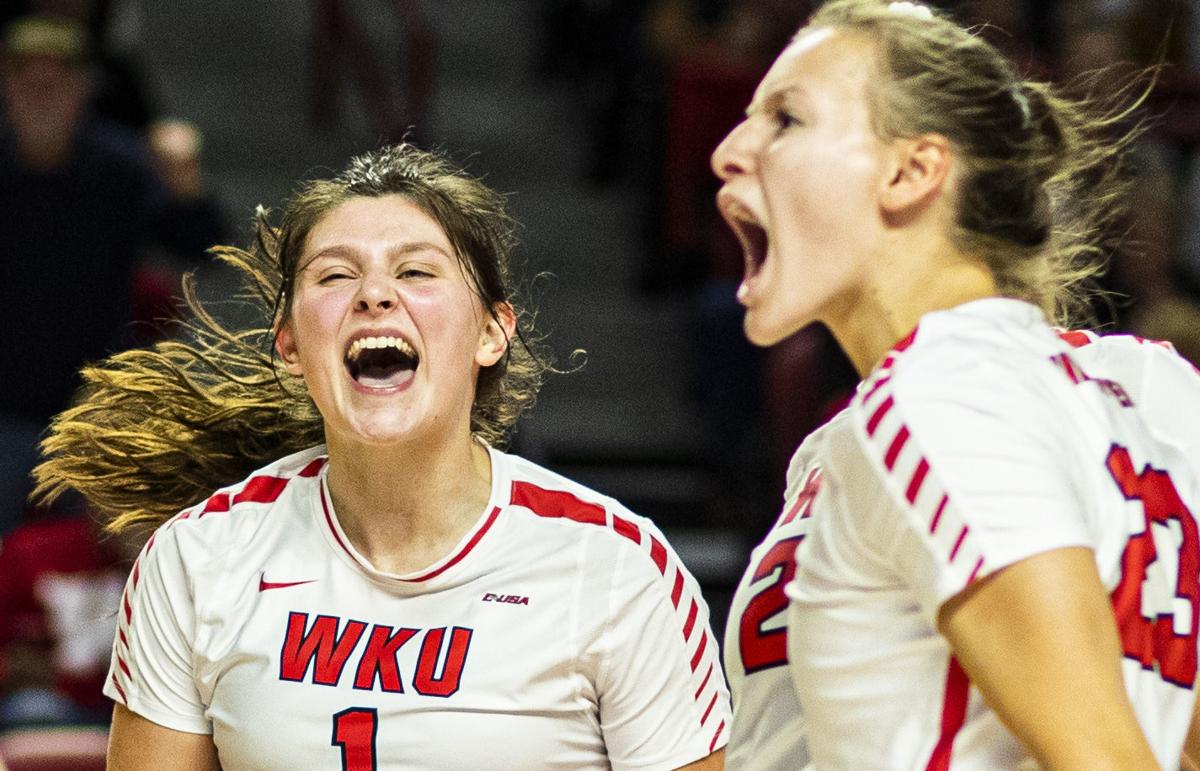 WKU outside hitter Paige Briggs, left, and right side hitter Sophia Cerino cheer after a point during WKU's 3-0 win over Kennesaw State on Thursday, December 5, 2019, at E. A. Diddle Arena. (Austin Anthony/photo@bgdailynews.com) 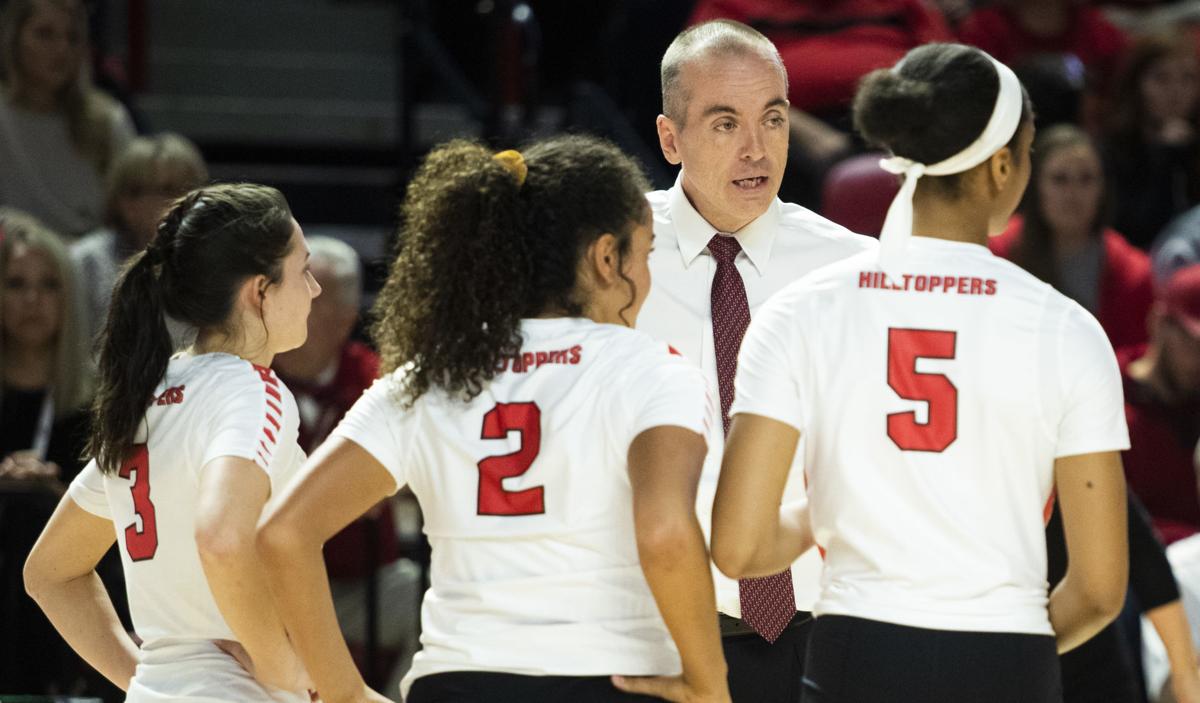 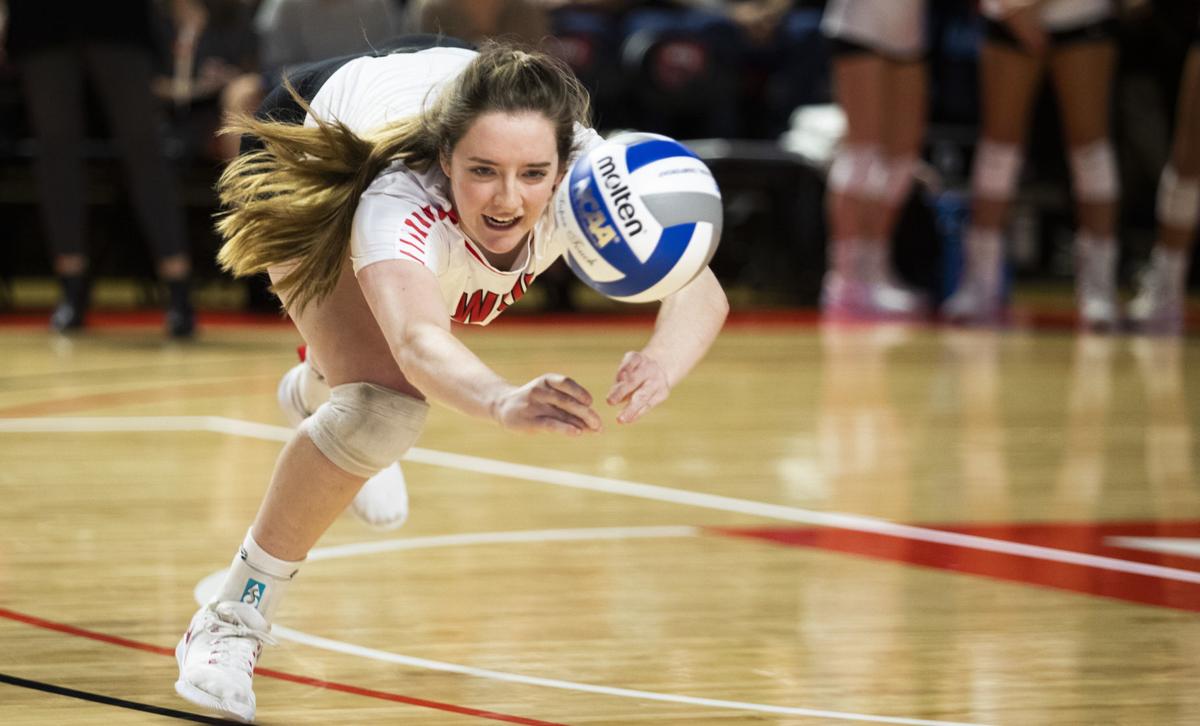 WKU outside hitter Hallie Shelton dives for a ball during WKU's 3-0 win over Kennesaw State on Thursday, December 5, 2019, at E. A. Diddle Arena. (Austin Anthony/photo@bgdailynews.com) 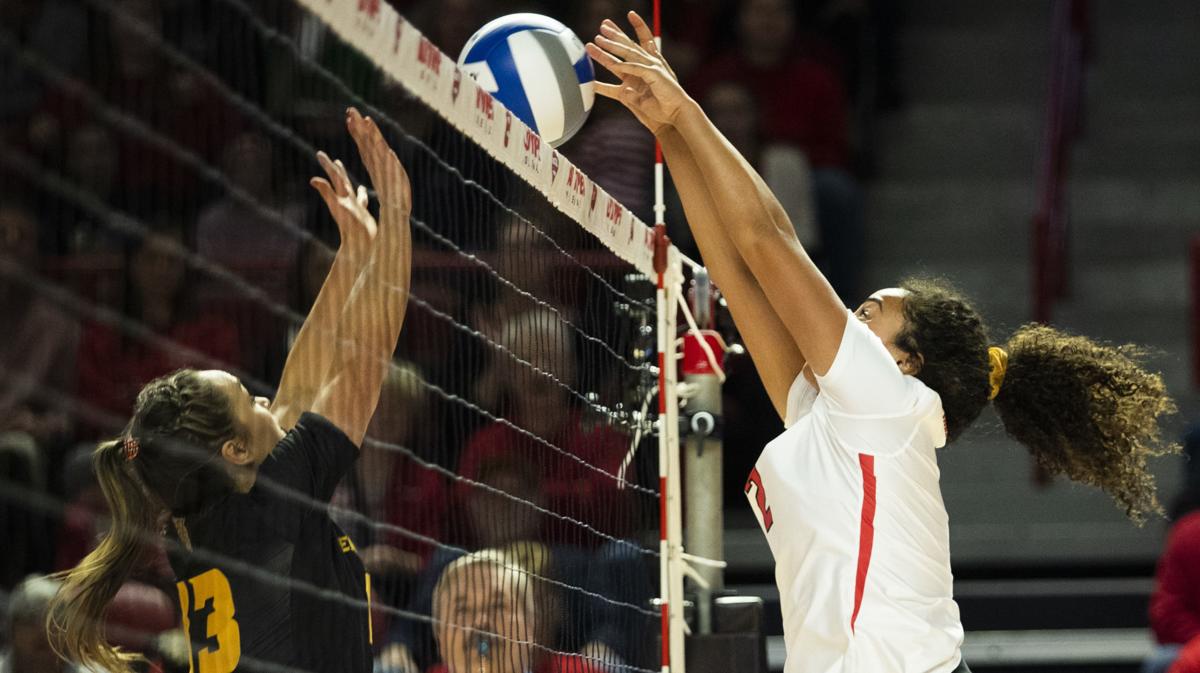 WKU setter Nadia Dieudonne hits the ball over the net during WKU's 3-0 win over Kennesaw State on Thursday, December 5, 2019, at E. A. Diddle Arena. (Austin Anthony/photo@bgdailynews.com) 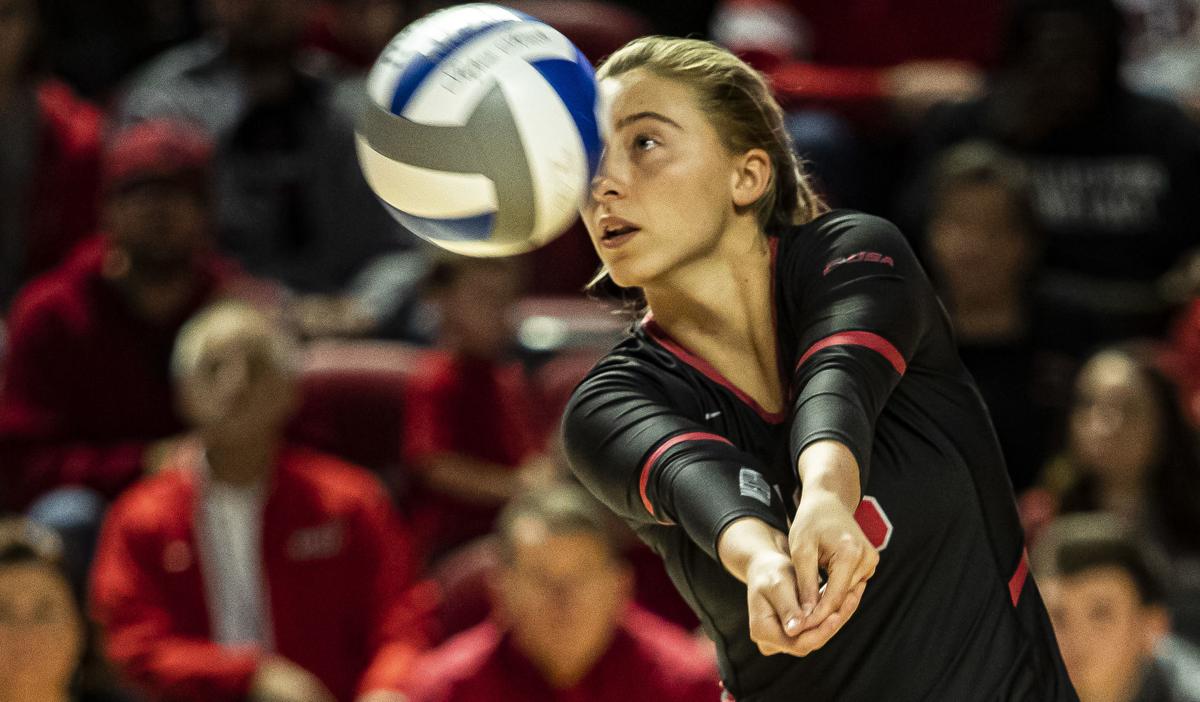 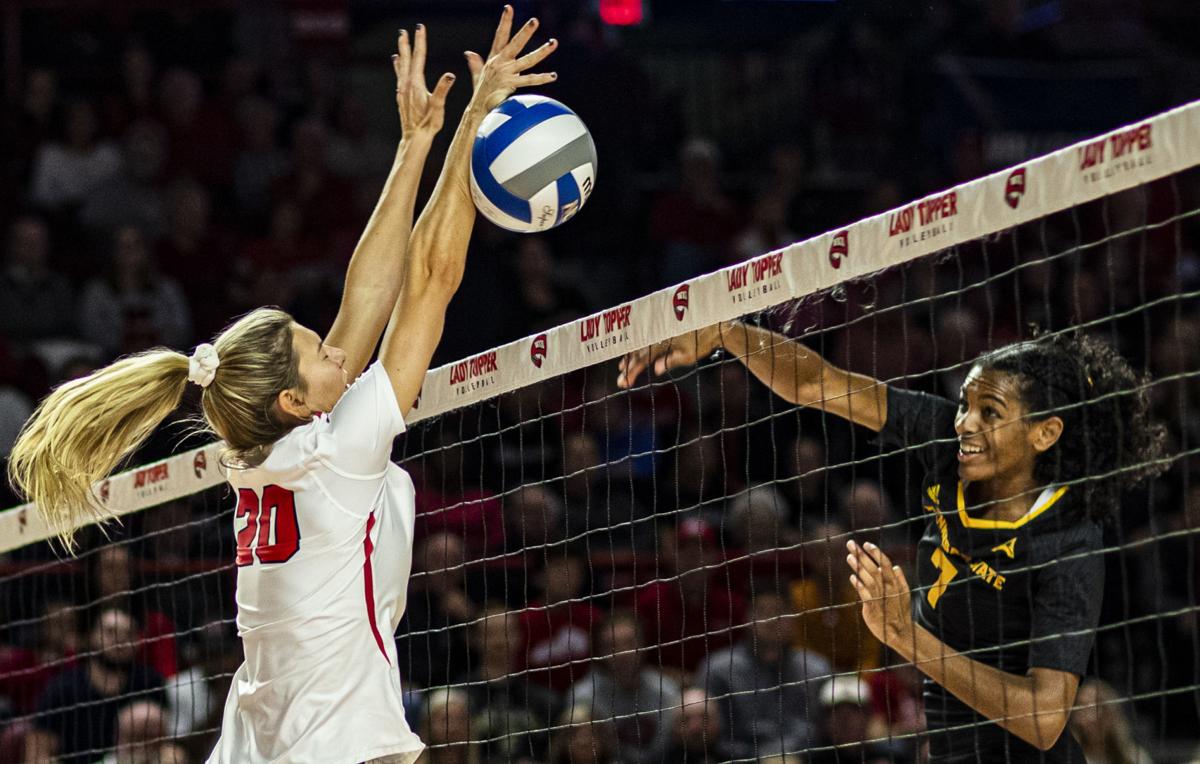 The crowd cheers as Western Kentucky players are announced before their NCAA Tournament first-round match against Kennesaw State on Thursday at E.A. Diddle Arena.

WKU outside hitter Paige Briggs, left, and right side hitter Sophia Cerino cheer after a point during WKU's 3-0 win over Kennesaw State on Thursday, December 5, 2019, at E. A. Diddle Arena. (Austin Anthony/photo@bgdailynews.com)

WKU outside hitter Hallie Shelton dives for a ball during WKU's 3-0 win over Kennesaw State on Thursday, December 5, 2019, at E. A. Diddle Arena. (Austin Anthony/photo@bgdailynews.com)

WKU setter Nadia Dieudonne hits the ball over the net during WKU's 3-0 win over Kennesaw State on Thursday, December 5, 2019, at E. A. Diddle Arena. (Austin Anthony/photo@bgdailynews.com)

When the NCAA Tournament selection show revealed Louisville would play in Western Kentucky’s host site, the storylines immediately jumped to what could happen in the second round.

The rematch is what everyone wanted. The only dent on WKU’s remarkable season is a loss to the Louisville Cardinals exactly three months ago.

Then came Wednesday, the day both teams opened practice to prepare for the tournament in E.A. Diddle Arena. Then came the words from Louisville’s Anna Stevenson that added fuel to the fire that didn’t need fanning in the first place.

“I just think it would be kind of fun to be their only two losses on the year,” Stevenson said at the team’s news conference on Wednesday. “That’s like a challenge for them and us, and I think we’re both coming into it excited just to compete.”

“We’re aware of the comment,” WKU senior Sophia Cerino said. “I’d say just keep saying stuff like that. We want to come out and prove we’re not going to let it happen again.”

And now it’s here. WKU (32-1) will get its shot at revenge in the second round of the NCAA Volleyball Tournament against Louisville (20-8) Friday night at 7 p.m. CST at E.A. Diddle Arena.

The Lady Toppers and Cardinals each swept their first-round opponents, Kennesaw State and Samford, on Thursday in front of a crowd of 4,154, a new attendance record for volleyball at Diddle Arena.

Friday will be indeed be the final match for WKU on its home floor and it’ll come against the only team that’s been able to beat them. Louisville won 3-1 on Sept. 6 in an early-season tournament. Since then the Lady Toppers have won a program-best 28 straight matches.

“Most definitely, this is our redemption game,” sophomore middle hitter Lauren Matthews said. “We’re coming in with all 10 toes down.”

Louisville swept Samford 25-21, 25-12, 25-22 to earn its 15th first-round NCAA Tournament match win in program history. The Cardinals had to scrap by the Southern Conference champions. Louisville jumped out to a 17-10 lead, only for Samford to fight back and make it 18-16 to force a Cardinals timeout.

Samford cut it to 19-18, but Louisville rallied off three straight kills to force another timeout.

A bad set out of that timeout and an attack error closed the gap again, but Louisville challenged the call that Aiko Jones’ kill did not hit out of bounds and the Cardinals got the point back. They sealed the first set with a block from Claire Chaussee and a kill from Jones to win the set 25-21. Jones powered that set with seven kills and a .429 attack rate.

A pair of aces helped Louisville reach a 5-0 lead to start the second set. Louisville stayed in control the rest of the way. Stevenson had three straight kills to build the lead to 20-11. Stevenson was responsible five of the Cardinals’ last six points between four kills and a block.

Louisville led throughout the third set and although Samford challenged, the Cardinals prevailed first on the night not knowing whether they’d get Kennesaw State or WKU in the second round.

“It was a big deal to get that under our belt with the sweep and I thought it was good that we got pushed and had to work our way through it,” Louisville coach Dani Busboom Kelly said.

Jones and Stevenson led Louisville with 17 and 12 kills, respectively. The Cardinals hit .343 for the match and also recorded nine service aces.

Now comes the rematch with WKU, where both teams look drastically different than their last meeting.

“A lot of teams at this time of the year look tired,” Kelly said. “I think Western looks like they’re jumping three or four inches higher at this point. They’ve had some young players that have really developed throughout the season and they look faster and more powerful and jumping higher.”

The Cardinals lost six of their last 11 games before the NCAA Tournament while they adjusted to the loss of Melanie Henry, who suffered a season-ending knee injury in early November. She was the Cardinals’ lone senior and a returning All-American and First Team All-Atlantic Coast Conference player.

That’s where Stevenson, Jones and outside hitter Claire Chaussee have stepped up, Kelly said.

WKU coach Travis Hudson shrugged off any comments made between players leading up to the match. The Lady Toppers had to fight through their own sweep over Kennesaw State in a match the coach thought his team was too uptight, but still composed enough to produce.

The fact remains, WKU has never beaten the Cardinals in 16 attempts, nor have they ever reached the NCAA Sweet 16.

Regardless of the Lady Toppers’ 32-1 record, Friday will take another special night to keep history going.

“I think we’ll take a deep breath and exhale and be a better team tomorrow,” Hudson said. “We’re going to need to be a better team. I’m not too caught up in they said this. They’re a really good team and a well-coached team and they’ve already proven they can beat us. So, they should have every belief they can come in here and beat us again. You’ve got two sides of the net filled with competitors and that’s how it should be when you’re fighting for a chance to go to the Sweet 16.

“This is an amazing stage for volleyball in the state of Kentucky. It’s an opportunity to advance out of here and move to the Sweet 16. It’s going to be another phenomenal environment.”{&end}

E.A. Diddle Arena had a feeling unlike any ever before for a volleyball match.