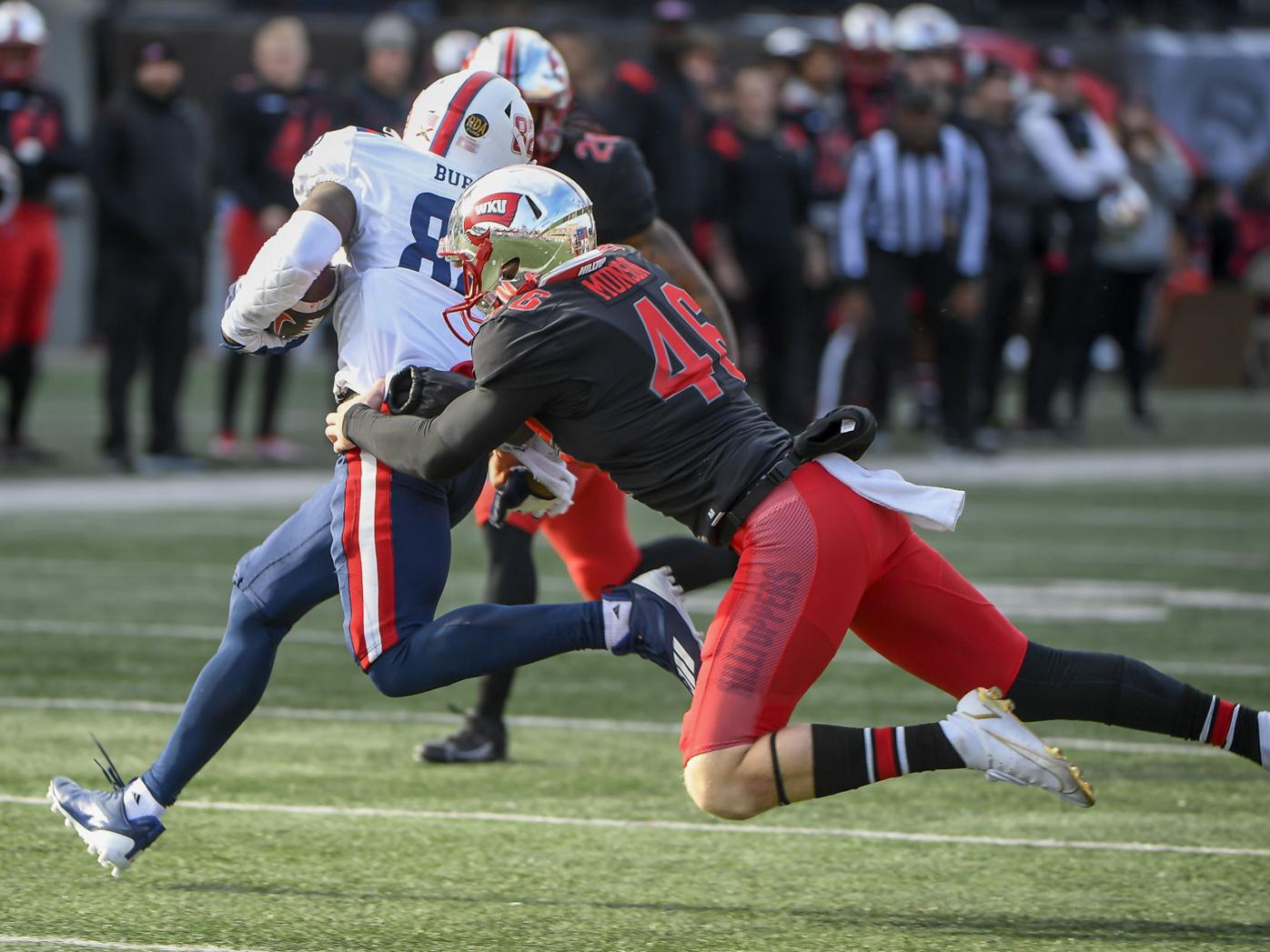 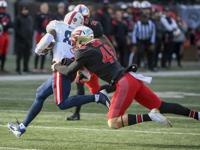 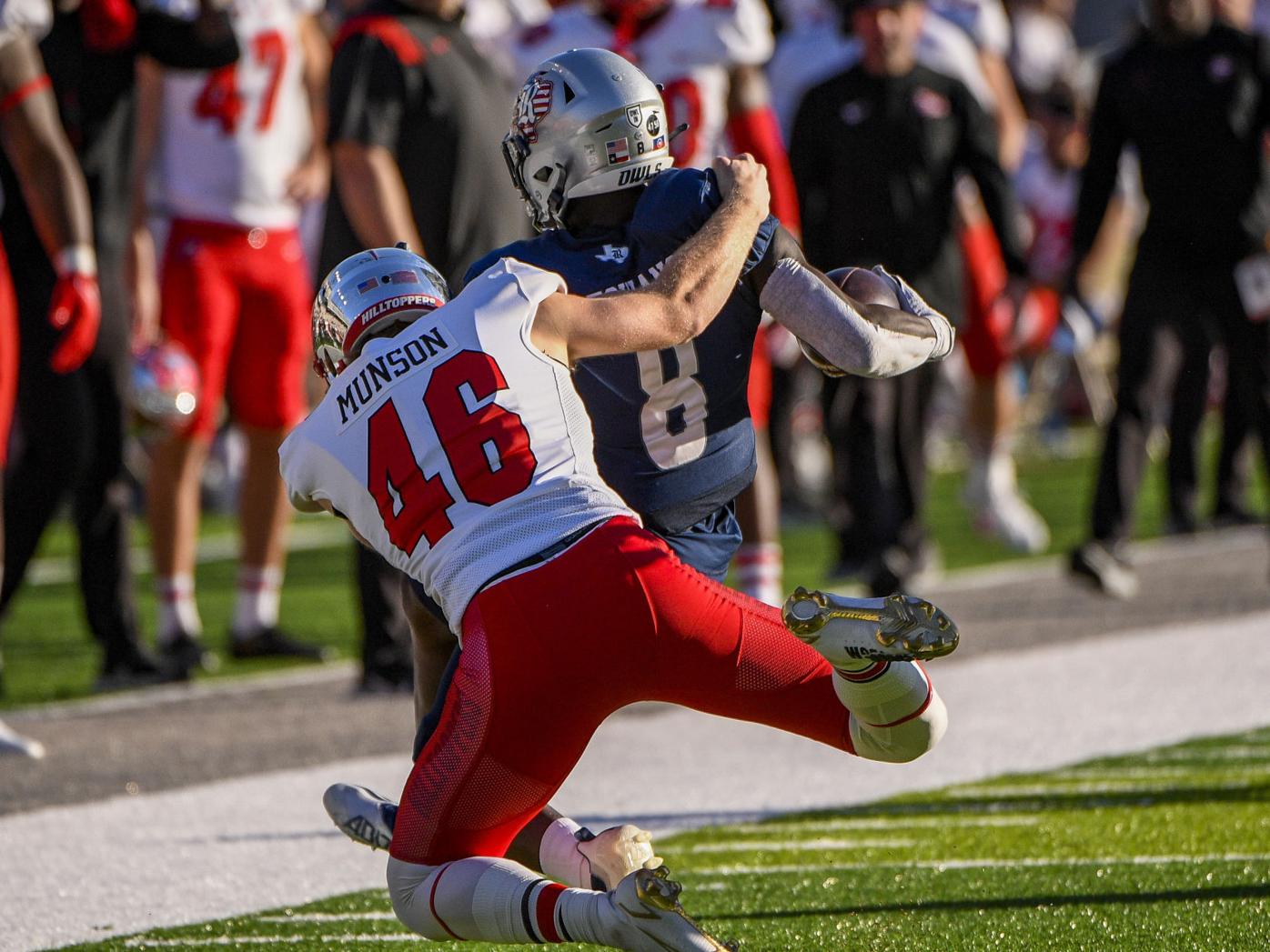 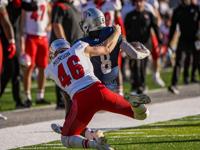 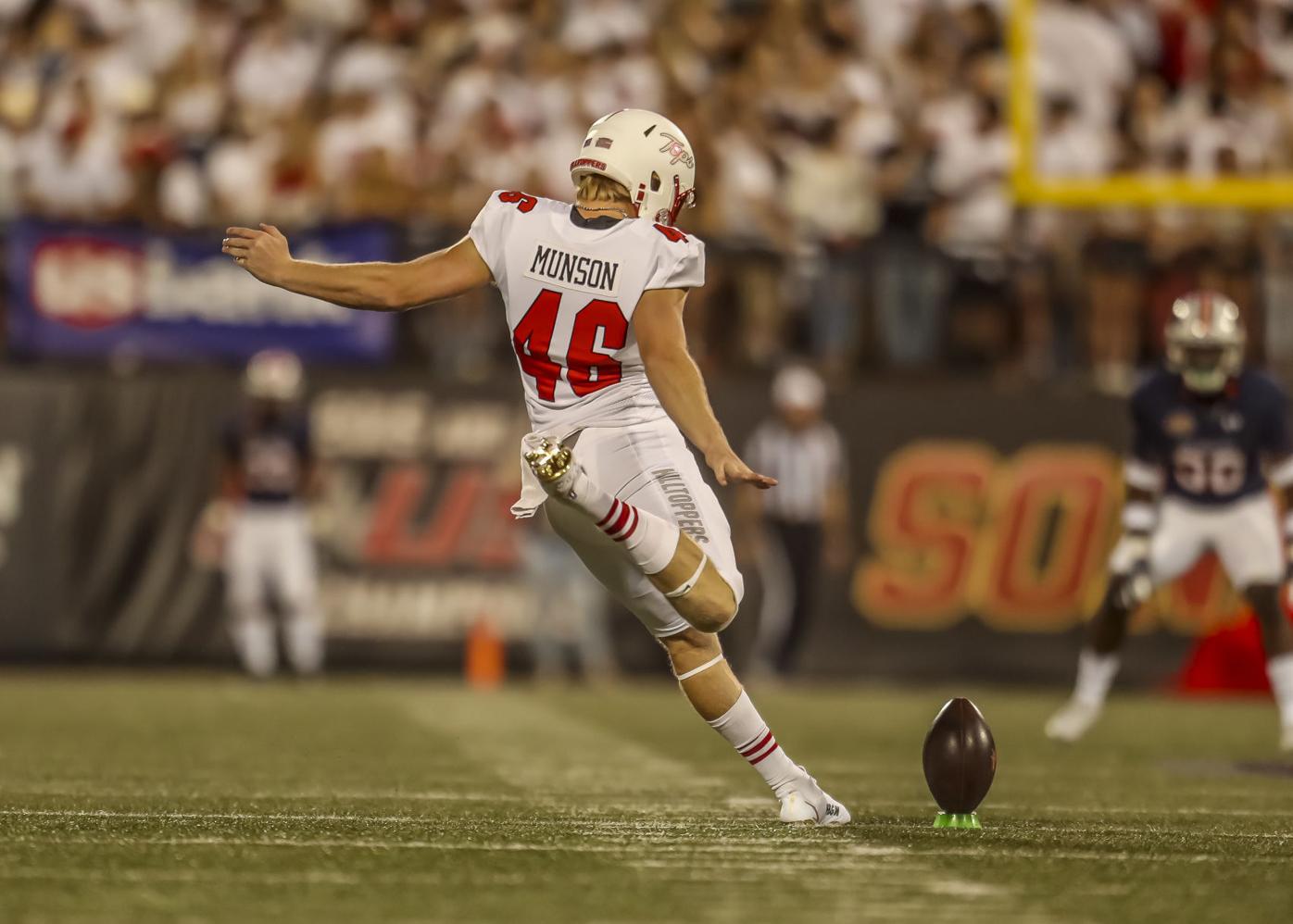 Cory Munson doesn’t give opposing teams the opportunity to return many of his kicks.

When he has lately? Watch out.

Western Kentucky’s kicker has been energizing the Hilltoppers on special teams with plays after the ball comes off his foot in the last two weeks.

“He’s our best coverage guy on the kickoff,” WKU head coach Tyson Helton said. “I give our kickoff cover team a hard time – I say, ‘Not only does he have to kick the ball, he outruns everybody, he’s the first one down there and he makes the tackle.’ It’s good for our kick coverage team because it kind of motivates them to say, ‘OK, we can’t let the kicker outdo us here.’ ”

The 6-foot-2, 205-pound sophomore has five tackles on the season, with four of those coming in the last two games.

On his first kickoff in the 42-21 victory at Rice, Munson and Kaleb Oliver together brought down Owls returner Juma Otoviano at the Rice 16-yard line. Later in the game, after WKU went up 42-14 and had a comfortable lead, Munson spun around Otoviano in front of the Hilltopper sideline and the team got energized. On the very next play, Omari Alexander picked off Rice quarterback Jake Constantine.

“It definitely seems to fire everybody up and gets the defense out there to go make plays for us,” Munson said after practice Tuesday.

The Warner Robins, Ga., native had two more tackles in last week’s 52-17 victory over Florida Atlantic. After WKU won the toss and deferred to open the game, Munson kicked off and pushed Owls returner Je’Quan Burton out of bounds. He added another tackle with safety Antwon Kincade early in the second quarter to make FAU start at its own 18 in a game in which the Owls’ offense scored just 10 points on WKU’s defense.

“That juices the whole team,” WKU center Rusty Staats said. “When you see a kicker giving her the whole way down, making big plays – little things like that is what can win a game, little things that shifts momentum or even just gives our team and the crowd energy. I love seeing that.”

In the win over FAU, Munson also delivered an onside kick after a WKU touchdown with just over three minutes left in the first half that he recovered himself. It led to a field goal from Brayden Narveson to put the Hilltoppers up 31-10 at the half.

“Cory does a really good job with that particular kick, and since we had the field position – we were kicking off at the 50 – you were not going to lose a lot if you didn’t get it,” Helton said. “We went ahead and rolled the dice and he did a great job coming up with it.”

Munson is up to five tackles on the year, but he also leads Conference USA in touchbacks with 48. He’s kicked off more than anyone in the league because of the high-powered Hilltopper offense – his 82 kickoffs are followed by UTSA’s Hunter Duplessis’ 72 – and Munson averages 59.1 yards per kickoff, which is right around the league average. FIU’s Chase Gabriel has a league-high kickoff average of 64.3 yards, but has only kicked off three times.

“First thing is to try to get it in the back of the end zone, and if that doesn’t play out, then go down and help cover the guys and if I see a hole, just fill it and try to make the tackle,” he said.

The last couple of weeks, he has.

“It fires me up a lot seeing our kicker going down and trying to make big hits,” WKU defensive back Beanie Bishop said. “Really, he might be able to play some defense, a linebacker, you know?”

WKU defensive coordinator Maurice Crum chuckled when asked about the kicker, before giving his answer to the possibility of Munson mixing it up on that side of the ball.

“If he wants to come, I’ll take him,” Crum said. “I need tacklers, I need guys that can run. We’ll find something to do for him, for sure.”

Munson has been doing it for a while, combining for seven tackles in his first two years at WKU, including one at the 14-yard line in a blowout at Arkansas during his freshman year he says is his favorite.

That year, he made a 52-yard game-winning field goal to give the Hilltoppers a 23-20 victory over Western Michigan in the SERVPRO First Responder Bowl. He went 17-of-28 on field goals and 39-of-40 on extra points in 2019, but lost the job of handling those duties during the 2020 camp to transfer Brayden Narveson, who has handled field goals and extra points since.

It hasn’t stopped Munson from trying to make an impact when he can, however.

“Cory is so slept on,” WKU offensive lineman Mason Brooks said. “I think earlier in the season he was kind of having some lows and coach kind of got into him and he kind of just turned it on. Another guy who doesn’t really complain, doesn’t look at his own stats, but when you see a kicker running down there full-speed and just laying the wood on guys, you’re like, ‘Shoot, I can do that too, man.’ I think it really fires everyone up.

“ ... As a collective unit, when we have all these guys that want to succeed together, I think it makes it a way more family atmosphere. When you have a team that loves on each other like that, it’s good.”

WKU is now preparing for a game at Marshall this weekend to determine which team from the East Division will travel to UTSA to face the Roadrunners in the C-USA championship. The matchup pits the Hilltoppers’ top scoring offense in C-USA against the Herds’ top scoring defense.

But don’t forget about special teams, too.

“All of us on special teams have to do our own jobs right,” Munson said. “When we do that, everything just fits into place for everybody else and gets the offense and defense rolling, and basically it just sews the rest of the game together for everybody.”{&end}