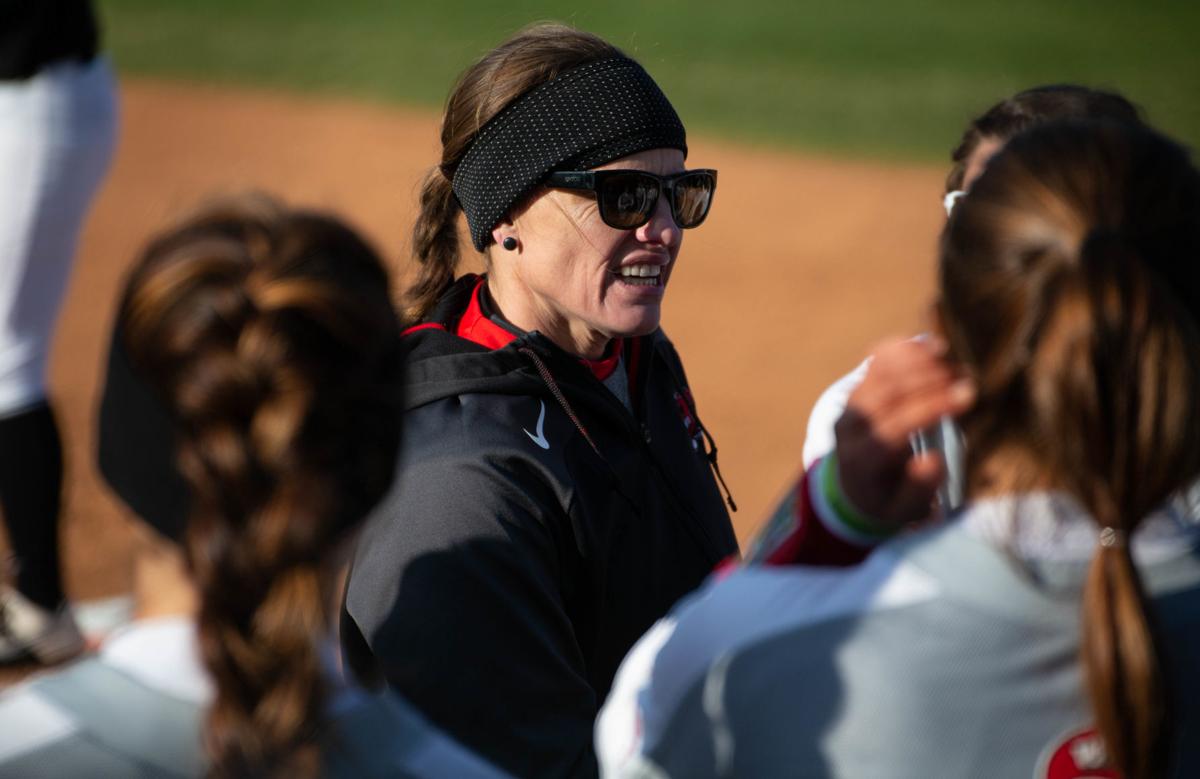 Western Kentucky softball head coach Amy Tudor talks to her players between innings in the game against Middle Tennesse at the WKU softball field on Friday, March 6, 2020. (Grace Ramey/photo@bgdailynews.com) 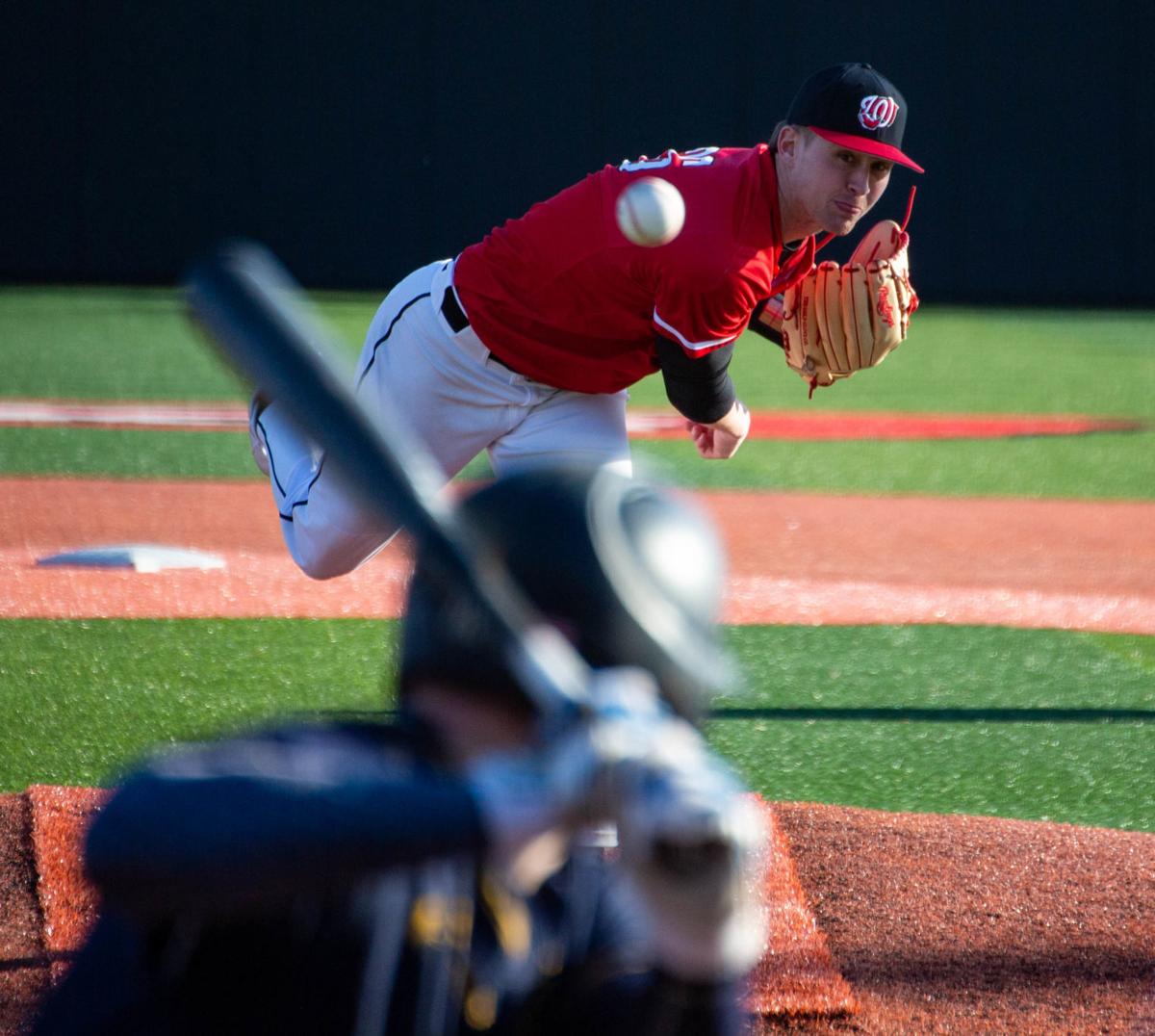 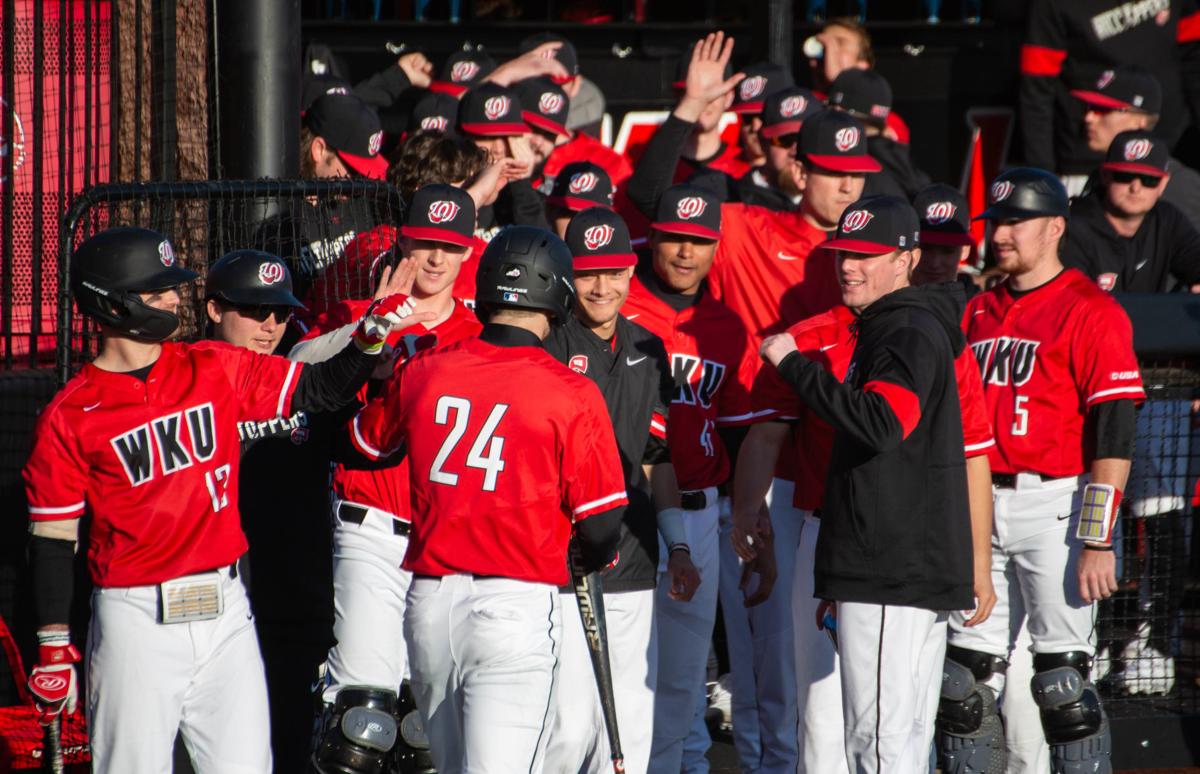 Western Kentucky senior infielder Kevin Lambert is welcomed back to the dugout by his teammates after scoring a run in WKU’s 7-6 win against Murray State on Feb. 19 at Nick Denes Field. 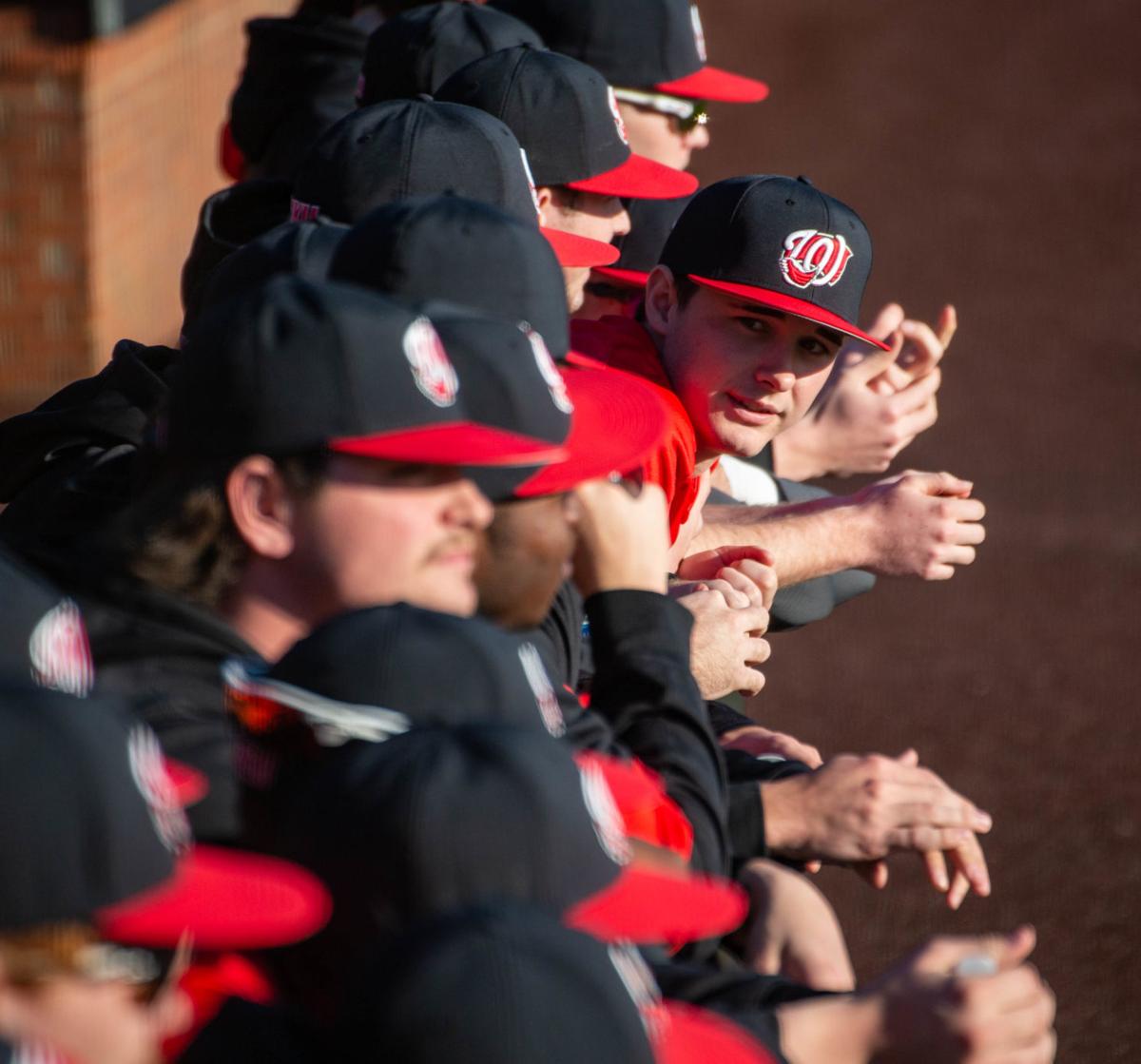 The Western Kentucky baseball team talks in the dugout during its 7-6 win against Murray State on Feb. 19 at Nick Denes Field. 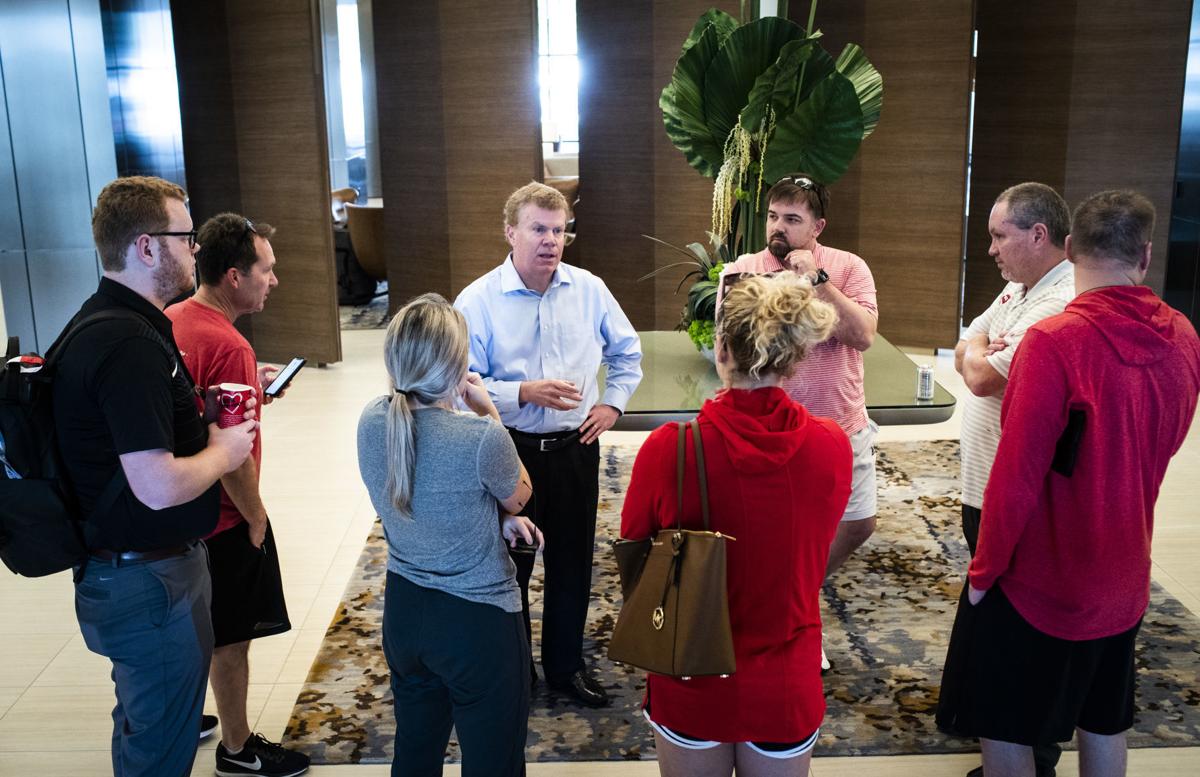 WKU athletic director Todd Stewart speaks to members of the athletics staff on Thursday, March 12, 2020, at the Omni Hotel in Frisco. (Austin Anthony/photo@bgdailynews.com)

Western Kentucky softball head coach Amy Tudor talks to her players between innings in the game against Middle Tennesse at the WKU softball field on Friday, March 6, 2020. (Grace Ramey/photo@bgdailynews.com)

Western Kentucky senior infielder Kevin Lambert is welcomed back to the dugout by his teammates after scoring a run in WKU’s 7-6 win against Murray State on Feb. 19 at Nick Denes Field.

The Western Kentucky baseball team talks in the dugout during its 7-6 win against Murray State on Feb. 19 at Nick Denes Field.

WKU athletic director Todd Stewart speaks to members of the athletics staff on Thursday, March 12, 2020, at the Omni Hotel in Frisco. (Austin Anthony/photo@bgdailynews.com)

When the NCAA halted college sports in the wake of the coronavirus pandemic, one of the early measures of goodwill was to grant student-athletes playing spring sports an extra year of eligibility.

It offered a glimmer of relief for the future and served as a necessary moment of saving face by the NCAA. But is the NCAA’s motive worth it? Power Five programs with bigger pockets can likely afford to take a small hit, but what about schools like Western Kentucky?

A smaller revenue distribution is already on the way from the NCAA, so what is the hit when college athletics’ largest governing body votes for the approval to extend seniors’ eligibility into 2020-21, which inevitably forces schools to spend more money they don’t have?

“When it first comes out, it’s a great thing,” WKU athletics director Todd Stewart said in a recent interview with the Daily News. “That is a good thing and you get the year back, but how do we implement this?”

The NCAA Division I council Monday will vote on the matter of an extra year of eligibility for spring student-athletes. On March 13, the day after the NCAA canceled its basketball tournaments and the spring sports championships for 2020, the NCAA’s Division I council coordination committee released a memo to member schools saying it “agreed that it will be appropriate to grant relief for the use of a season of competition for student-athletes who have participated in spring sports.”

The memo said additional details and issues on rules would be addressed in the weeks to come. That same relief option for winter sports athletes will be considered, but that move hasn’t garnered as much support.

The vote coming Monday, which is likely to be passed, will certainly bring logistical hurdles.

With or without the vote, the NCAA is distributing less money to member institutions this year with the report Thursday that it would distribute just $225 million to Division I schools, a figure that was supposed to be $600 million.

A report by USA Today estimated that additional seasons of eligibility for seniors on spring sports teams in Power Five conferences could range from $500,000 to $900,000. Within that worst-case scenario among Group of Five and FCS schools, this same report figures that costs could range as high as $400,000.

“Every school is going to have a different revenue challenge than they did the previous year,” Stewart said. “It’s simple math, if you add expenses and decrease revenues, you have to work through that.”

Last summer, the Board of Regents approved a 2019-20 budget that called for a universitywide $8.6 million in cuts. Athletics had a $365,915 reduction in the budget. Since 2012, Stewart has led an athletic department through $6 million in total budget reductions.

Should the NCAA Division I council approve Monday an eligibility relief of spring sports athletes, new financial measures will have to be enforced. And that’s not even factoring in the possibility that the effects of COVID-19 may linger into college football season, where the overwhelming flow of college sports revenue occurs.

If the vote passes, NCAA bylaws pertaining to scholarship limits would have to be altered and scholarship money will be adjusted. Fewer spring sports athletes are on full scholarship than fall and winter athletes, and expanding rosters will create concerns.

“From the school standpoint, you have to look at it in two ways,” Stewart said. “If you have people whose eligibility would’ve previously expired and come back, how does that work from a roster standpoint? Look at the transfer portal. It’s hard to keep athletes happy with the criteria right now. All of a sudden you want to add more people to a roster. That sounds good, but the practicality of that is you likely have a lot of people that aren’t happy with the way it plays out.”

The vote would allow all those players the opportunity to return, but their spot on the 2020-21 roster would have to be worked into the framework of their team’s current budget.

“You’re adding people to a roster, you’re adding expenses and that’s what will have to be sorted out,” Stewart said. “I like the fact that an athlete in the last year doesn’t get to start the conference season, giving them the ability to come back, I’m in favor of that and we would work through that. I don’t know that everyone will come back. You get caught up in the emotions at the time, but I really think there will be quite a few that when they think through it and because of job opportunities, they may feel that it’s best to get on with their life and I don’t know how many will actually come back.”{&end}

Helton's staff adapting to coaching only through technology

The coronavirus pandemic canceled sports for the time being. Even college football practices have been called off.