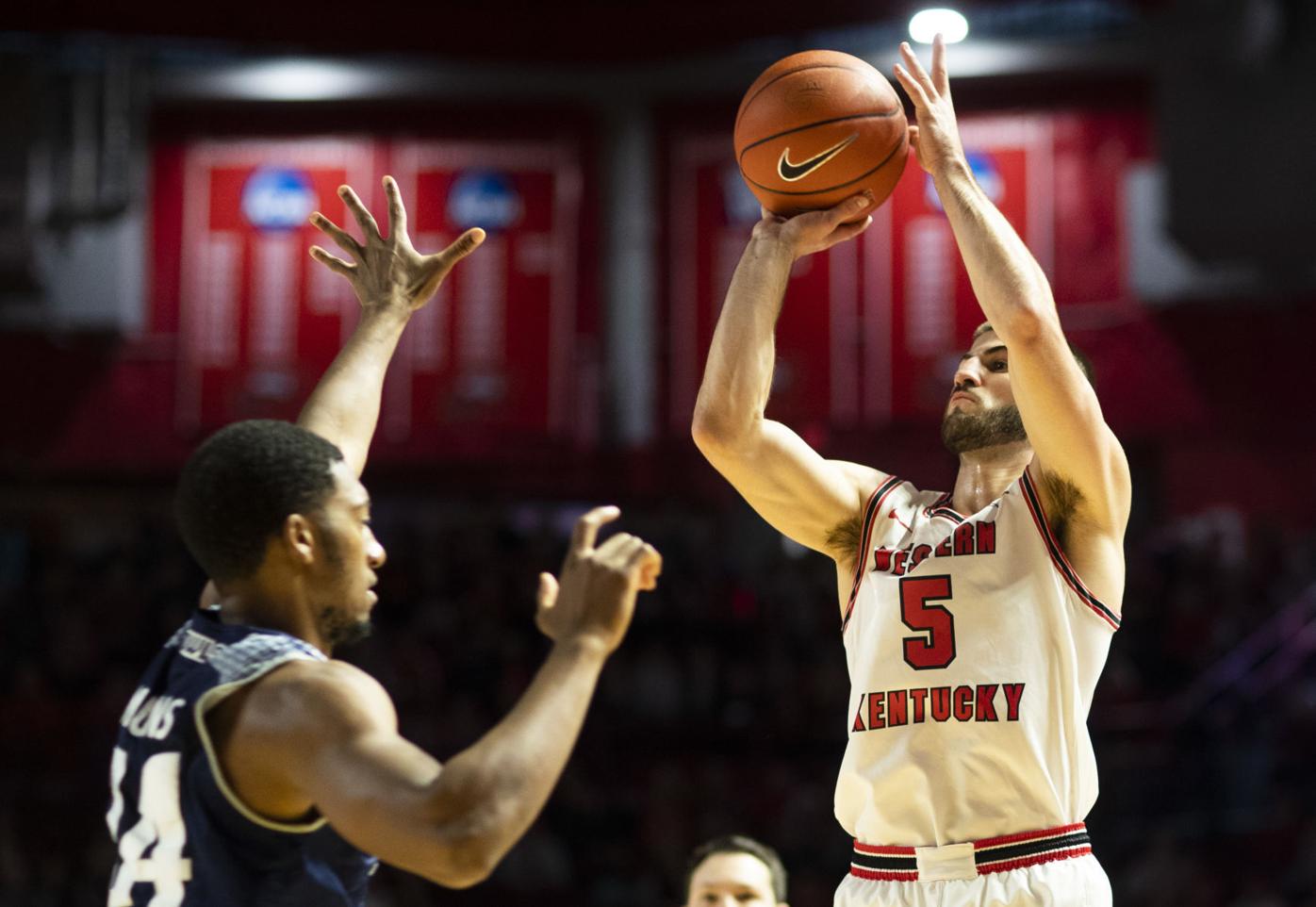 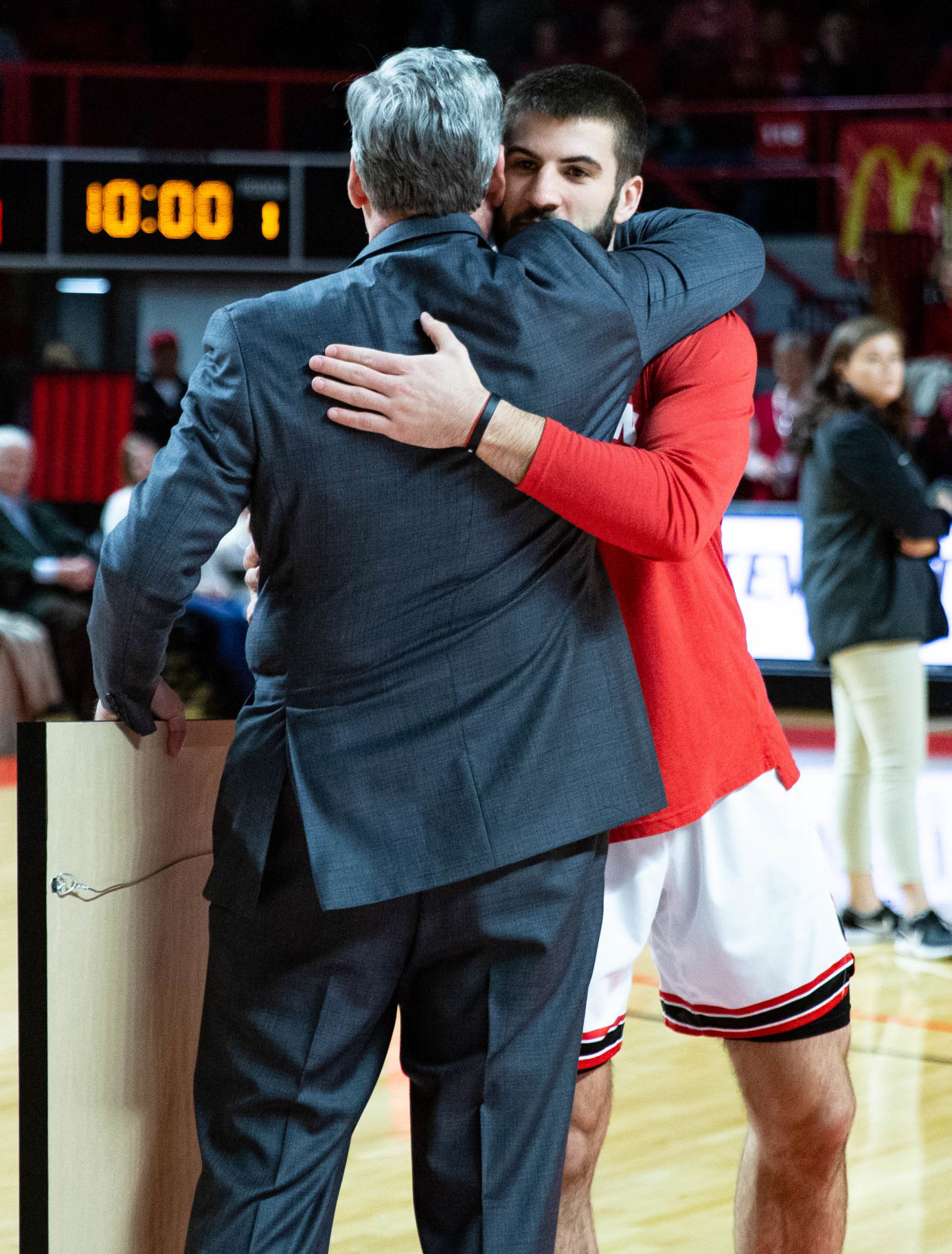 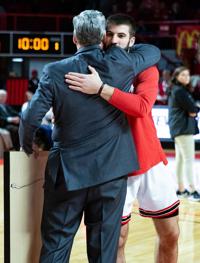 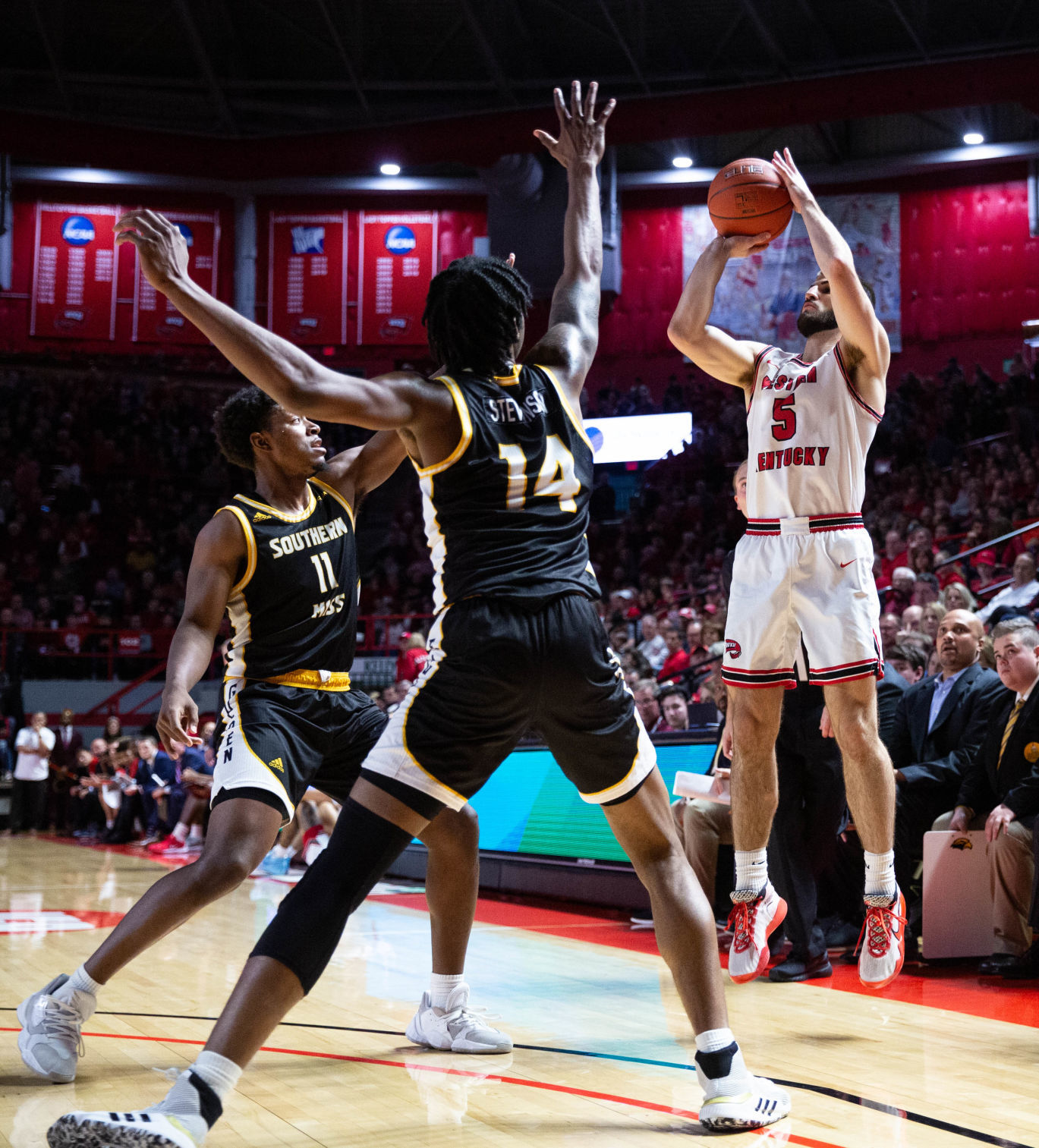 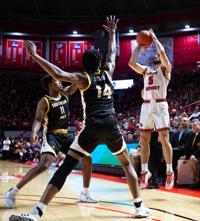 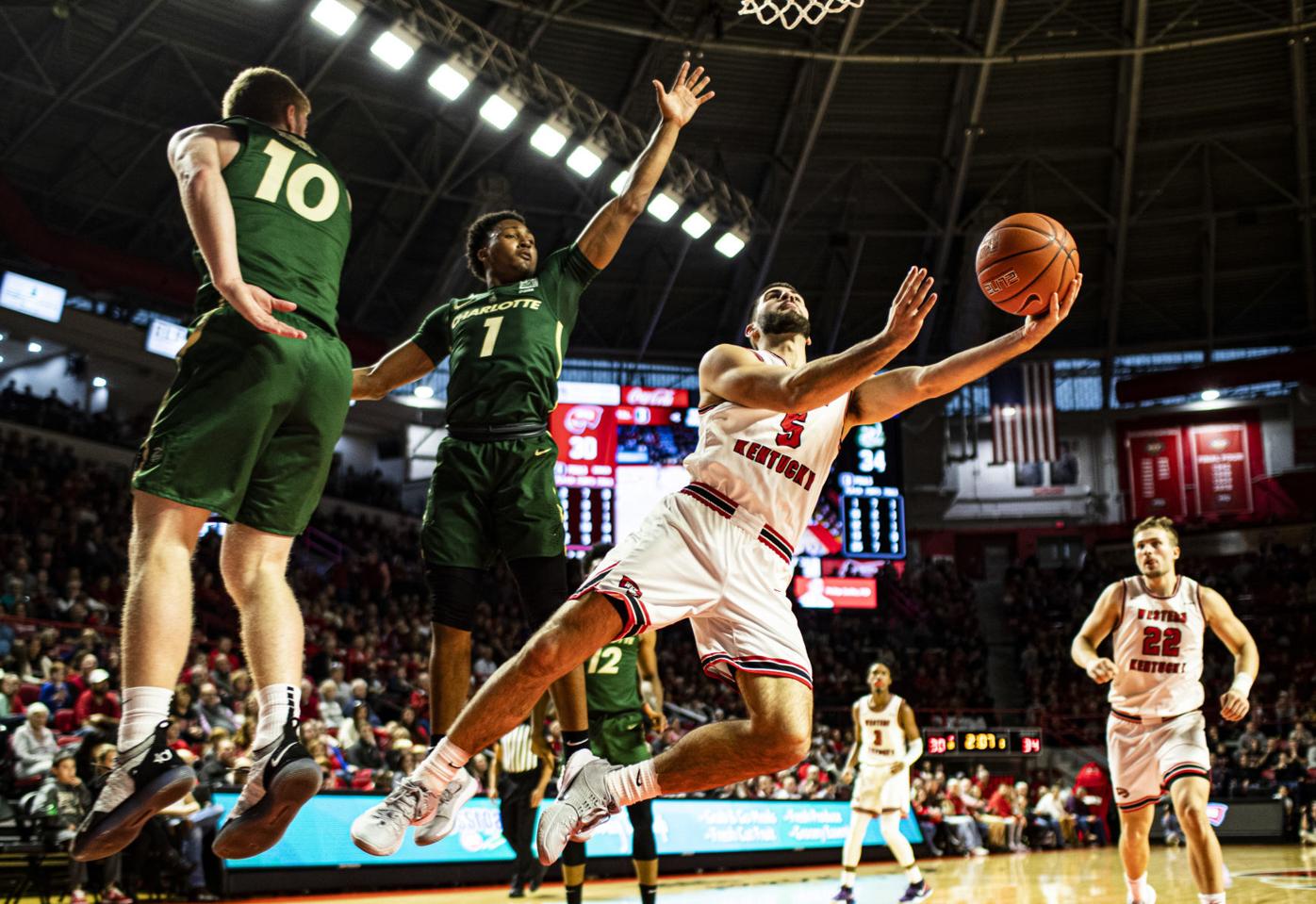 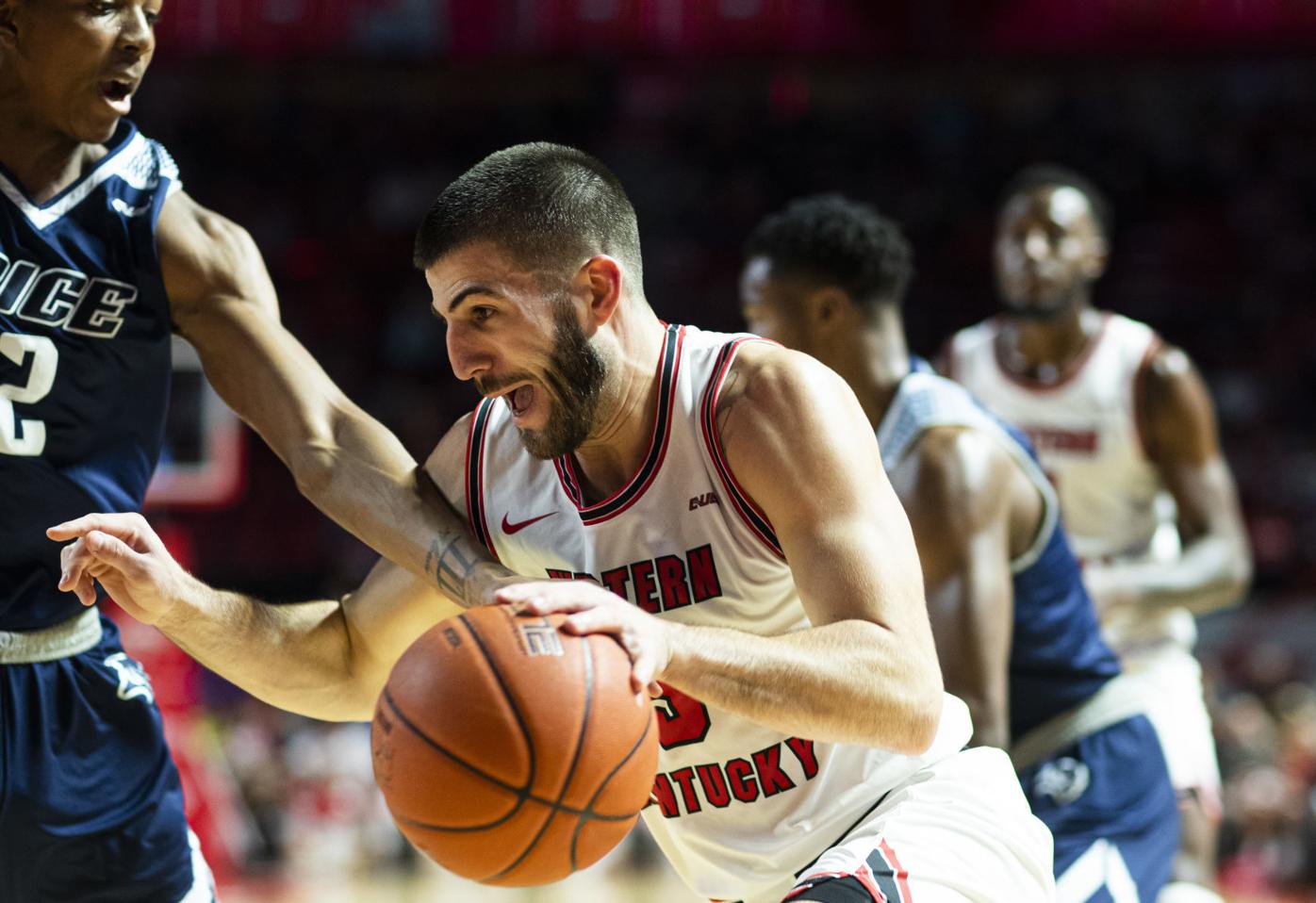 A familiar face checked in for Western Kentucky with 13:18 to play in the first half of Sunday’s Asheville Championship consolation game against South Carolina.

Camron Justice was back on the floor for the Hilltoppers for the first time since the 2019-20 regular-season finale at Florida International.

After a year in the “real world,” a stint as a graduate assistant in basketball academics and a waiver from the NCAA granting him an additional year of eligibility, the 6-foot-3 guard from Hindman is ready to provide some experience in WKU’s rotation.

“To be completely honest, man, it’s kind of like a surreal moment right now,” Justice said. “I don’t know if it’s even processed into my mindset yet that I’m really back playing again. It’s fun. It’s going to be a journey – it’s a long journey – and I know my task is to be that veteran leader and bring some of that experience to this team.”

Justice played just over 17 minutes in the 75-64 loss to the SEC foe, with three points on 1-of-6 shooting from the field and 1-of-5 shooting from 3-point range. He said before he received his eligibility in the middle of last week, “I wasn’t really allowed to practice like I needed to, so really at this point I’m just trying to get back in shape and go from there.”

It was unsure when, or if, he’d regain the year of eligibility that stemmed largely from a combination of a hardship waiver from his injury-related departure from Vanderbilt, as well as a previous COVID year he didn’t utilize. Because of that, Justice already had plans for the weekend while the Hilltoppers were in Asheville, N.C. – his wedding.

But despite getting married Saturday, he made it to the tournament in time for the Hilltoppers’ second game, and head coach Rick Stansbury was happy to take whatever he could get from the veteran player.

“Like he told me yesterday, he said, ‘Coach, I probably hurt us more than I helped us,’ “ Stansbury said. “I said, ‘Naw, you helped us just being out there. You’ll get better through all this other stuff. Don’t worry about that.’ There will be some positive things come from that, just getting him back. He’ll be much better this next game, too.”

He started his collegiate basketball career at Vanderbilt after coming out of Knott County Central as a four-star prospect by ESPN, the winner of both the Kentucky Mr. Basketball and Gatorade Player of the Year awards in 2015 and ranked third in KHSAA history in career points (3,588) and 3-pointers (393). He played as a true freshman in 2015-16 while averaging 3.3 points and shooting 38.9% from long range but appeared in just seven games as a sophomore before transferring at the close of the fall.

Justice’s next stop was at IUPUI, where he averaged 18.6 points, 3.2 rebounds, 2.9 assists and 1.3 steals his redshirt junior season. He was named to the All-Horizon League second team and ranked third in the league in scoring and was among the 10 best in 3-pointers made, assists, steals, free throws made, free throw percentage and minutes played.

He then went to WKU as a graduate senior for the 2019-20 season, where he started 18 games and appeared in 27. Justice averaged 10.1 points – making 48 3-pointers – and 1.4 steals but battled a bulging disc in his back for roughly a month of Conference USA play that left him limited or out of games.

Stansbury said the process of regaining eligibility started around February of that season, but the COVID-19 pandemic caused a disruption in it.

“We didn’t even know if we’d have a season. We didn’t know what was going on in August. He didn’t know. At that point in August, we really can’t get it, he doesn’t know if there’s going to be a season and basically he went to work in the real world for a year,” Stansbury said. “After last year, got back in here this summer, we still realized he’s got that year. If they hadn’t had given us that COVID year, then he probably wouldn’t have gotten it back, but because they did, he was kind of on that same time frame he was the year before.”

Stansbury said it took some time to get the paperwork required by the NCAA for the transfer, especially because his time at Vanderbilt was so long ago, but credits WKU senior associate athletic director of compliance and student affairs John McCammon for helping get it done.

Justice had returned to WKU in his academic advising graduate assistant position, and had “been really good in his new role,” Stansbury said after the team’s first exhibition game.

“On the academic side of things, it was weird for me to be a player my whole life and change over to that aspect where it was more of a business feel. I had to stay on top of guys about going to class and getting their homework done and this and that,” Justice said. “It was weird for me. A lot of these guys I played with – I played with Josh (Anderson). There’s a couple guys on this team that were older like Jairus (Hamilton) and J.B. (Jaylen Butz) and Keith (Williams) that I kind of grew up playing against when I was playing. It was kind of funny to be this age and then being that mentor for them and kind of instructing them on what they needed to do.

“I’m going to take that same aspect that I learned from that field and roll it over to this side. I think it’s going to be an advantageous thing for me.”

Stansbury believes Justice will be an important addition for a team somewhat lacking in experienced depth at the guard position.

“He had started for us two years ago. He brings something that we need – another ball handler, another shooter, another guy that can pass that basketball and get other people open,” Stansbury said Friday after the team’s loss to Minnesota. “Six- or seven-year guy, whatever he is. Maybe seven, right? Seven-year guy. Be a married man. He is in the real world.

“ ... He brings a lot of things to our team. An ingredient that’s missing badly right now. You guys will know. I’ve seen him most (during) the fall. A guy that can make shots and play off the bounce. A guy that can pass the ball and gives you a lot. He is going to help us immensely.”

WKU has started Dayvion McKnight, Luke Frampton and Josh Anderson as guards early this year, with Sherman Brashear the only other to play significant minutes off the bench. The Hilltoppers got just five bench points last game and seven the game before.

“Cam, he’s an old guy,” McKnight said. “He’s the grandpa of the team now and everybody looks up to him, even me, so having him back is going to help.”

WKU faces a big challenge next with a 7 p.m. game Friday at No. 11 Memphis, but the Hilltoppers are hopeful Justice can provide a boost as the season progresses.

He believes he can, too – which is why he wanted to come back.

“Just my competitive nature and my will and my love for the game ultimately just outpowered everything else,” he said. “I think what I can do can help this team achieve what we want to in the end and I think just putting both of those together just made for the right decision.”{&end}