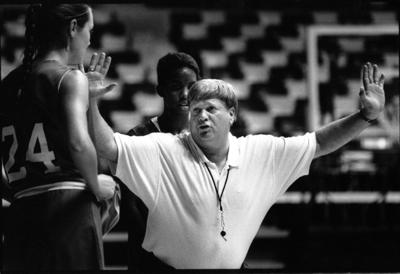 Hanging from the rafters in E.A. Diddle Arena are jerseys honoring influential people in the history of Western Kentucky University’s athletic programs.

Among those is one for Paul Sanderford, the head coach of the school’s women’s basketball team from 1982-97. He won 365 games and took the Lady Toppers to three Final Fours, plus a berth in the 1992 national championship game.

Sanderford’s head coaching career spanned 26 years and his impact is still felt throughout the game today, which is why he was named one of 12 finalists for the Women’s Basketball Hall of Fame on Jan. 9. The Class of 2020 will be announced Monday on ESPN2 during the Connecticut at South Carolina game.

By the time Jeff Walz arrived at Western Kentucky in 1995, Sanderford had already been with the school for 13 seasons and led the Lady Toppers to the program’s three trips to the Final Four. Walz, a Highlands High School graduate, was a two-year basketball letterwinner at Northern Kentucky, where he graduated with a bachelor’s degree in secondary education.

He came to Bowling Green to continue his education, and applied for an open graduate assistant position on Sanderford’s staff. Walz, who is now the winningest head coach in Louisville women’s basketball history and has led the team to three Final Fours and two national runner-up finishes, had met Sanderford while coaching AAU and was offered the position.

“I wouldn’t be where I am without Paul,” Walz said in a phone interview with the Daily News. “I don’t make any bones about it. It’s just the facts.”

After the 1995-96 season, David Graves left Sanderford’s staff and Walz was promoted the following season, which the Lady Toppers finished 22-9 in the NCAA Tournament – Sanderford’s 12th and final trip with the program.

Sanderford took the head coaching position at Nebraska the following season and was there through the 2001-02 season. Walz jumped at the opportunity to continue his coaching career by following Sanderford to Lincoln, Neb.

“I was planning on being (at WKU) two years and getting my master’s degree ... and then get back to teaching,” Walz said. “After my first year (at WKU), the third assistant ... got a head coaching job and then he moved me up, so I did that for one year with Coach at Western Kentucky, and then he got the job at Nebraska the following season and asked me to go with him, so I spent four years there with Paul.”

While at Nebraska, Walz told Sanderford he wanted to be a head coach one day and Sanderford later encouraged him to take an assistant coaching position at Minnesota, which he did. After a year there, Walz coached at Maryland from 2002-07 and then took his current position at Louisville.

Walz has since become one of the most prominent coaches in the country. He still uses what he learned from Sanderford and keeps regular contact with the man he credits for getting his coaching career started.

“I tell everybody that asks me about him, he’s the best in-game X’s and O’s coach that I’ve ever been around or watched,” Walz said. “He had a great feel for the game. He knew when to sub, knew when to run, did different sets and changed up defenses and I took great pride in learning from him and I still try to carry on what he taught me.”

There was a significant stretch of time between’s Angela Beck’s announcement that she was leaving Nebraska for the ABL and Sanderford’s hiring, but the former WKU coach’s arrival was met with excitement from the team.

“We had an entire summer of just being in a little bit of limbo,” Amy Williams, a senior on the 1997-98 team and the current Nebraska head coach, said in a phone interview with the Daily News. “When he was finally announced as our head coach we were incredibly excited because of the success he had and ... we were very motivated to want to have somebody direct our program in that direction as well.”

Williams remembers an intensity he brought to practices, but also his ability to simplify drills and concepts. Williams also recalls his humor, like how he would ask her ACT score of IQ before saying she “was the dumbest smart kid he knew for that pass,” and his ability pull the team together.

The Huskers won a program record-tying 23 games Williams’ senior season and made the first of three straight NCAA Tournaments under Sanderford, doubling the previous number of bids by the program. His teams also set school attendance records in each of his first three seasons and ranked top 25 nationally in home attendance each of his first four years there.

“I think it was the belief that he brought into the program, that that’s what the expectation should be,” Williams said. “He was really good about marketing our program and I so vividly remember at first when I was a freshman here at Nebraska we would have a few hundred people at the games, and then my senior night there were over 12,000 people at the game.”

Drawing crowds was nothing new to Sanderford. He told then-Daily News reporter and current WKU Associate Athletic Director of Communications/Media Relations Zach Greenwell in a 2012 article that he “was always big on putting butts in the seats.” On Feb. 23, 1986, E.A. Diddle Arena housed 12,951 fans for a 74-64 win over Old Dominion – the second-largest crowd to ever watch a women’s basketball game in the country at the time and more than the facility’s then-official capacity of 12,370.

“He made going to women’s basketball games a cool thing to do, where we’re still fighting that now at times trying to get people to come once,” Walz said.

Williams is in her fourth season coaching Nebraska, where she was named the Big Ten Coach of the Year in 2018. Her head coaching career has included stops at Rogers State and South Dakota, where she won the WNIT in 2016 in a run that included a 68-54 quarterfinal victory over a WKU team coached by Michelle Clark-Heard, who played for and coached with Sanderford. Clark-Heard is now the head coach at Cincinnati.

Darrin Horn was at WKU when the Lady Toppers made their deepest run. He was a four-time letterwinner for the men’s basketball team, helping the Hilltoppers to an NIT berth in 1992 and NCAA Tournament appearances the following three seasons. He also served as an assistant from 1995-97 on the men’s team under Matt Kilcullen.

“(Sanderford’s) record speaks for itself as it relates to that, but I also think when it comes to the women’s game, you think about what he did and when he did it,” Horn, who currently coaches the NKU men’s team, said in a phone interview with the Daily News. “The guy was literally a visionary of sorts in terms of recognizing that women’s basketball was going to grow and was going to be much bigger than people thought it could be.

“He came to a school where it hadn’t necessarily been that big before and turned it literally into a national power. When you step away and look at that with some perspective, really what he did was incredible. I would argue, how many places around the country did that really happen? A handful? Five, six maybe?”

Horn went on to work as an assistant at Morehead State and Marquette, before returning to WKU as the head coach in 2003. The first-year head coach’s staff was shorthanded, and Sanderford filled in as a volunteer assistant.

“I would say he has helped shape me as a coach, especially as a young coach, as much as anybody did,” Horn said. “He was a tremendous influence on me and our program.”

Sanderford remained on the staff for the following three seasons – the Hilltoppers won at least 22 games in each – before stepping away. WKU advanced to the Sweet 16 the following year and Horn went on to become the head coach at South Carolina. He was there until 2012 and worked on the staff at Texas until being named to his current position last year.

Collins calls Sanderford a friend first, then an adviser who helps to simplify concepts when the second-year WKU head coach overthinks them.

“I’ve sat down and talked to him about a lot of things from recruiting, to coaching, to running camps – everything – so he’s always been very accessible and very available and I think he’s more concerned about feeling he’s imposing or intruding and that’s not it at all,” Collins said. “I feel honored every time I see him come to Diddle Arena to a game, let alone when he comes to a practice.”

The Lady Toppers entered the season as one of only 12 Division I programs to eclipse 1,000 wins, and Collins credits Sanderford for building that winning culture at WKU.

“The impact when I think of coach Sanderford is he made it cool for the best players – not just in Kentucky – to come to Western Kentucky. There were a lot of great players when he coached that could have gone and played for Tennessee, and at the time that was Pat Summitt’s Tennessee,” Collins said. “ ... At that time, Tennessee was it and coach Sanderford made it cool for some huge, big-time impact players to come to Bowling Green, Kentucky, and be a part of this tradition.”

The tradition Sanderford built on the Hill has been carried on in a variety of ways. Collins says the team still runs a defense – he won’t say what it is – that came straight from Sanderford and has had the same call through the line of the program’s head coaches. It’s also shown in the team’s records. WKU entered the season as one of only 18 Division I teams in the nation with an active streak of at least seven straight 20-win seasons. The Lady Toppers are currently 16-6.

“The reason Western Kentucky is where we are on a national level is because of coach Sanderford. He lifted this program to the top,” Collins said. “ ... Now that tradition is being carried on with a lot of great players and coaches since then, but there’s no doubt that he’s the one that kind of put all those banners hanging up in the rafters in there.”

The Jan. 9 announcement marked the second-straight year Sanderford has been named a finalist for the Women’s Basketball Hall of Fame. Walz calls the decision “overdue” and Horn calls it “a no-brainer,” but whether he’s named to the Class of 2020 on Monday or not, his impact on basketball in undeniable.

“The success he’s had at all levels, he deserves the honor to be in the Hall of Fame,” Walz said. “Unfortunately, he didn’t make it that first time he was on the ballot, but hopefully this will be the year that everybody really takes a step back and looks at what Paul Sanderford has done throughout his career and during his career that has earned him this right and this honor to be in the Hall of Fame.”{&end}

Sanderford not among inductees for WBHOF Class of 2020