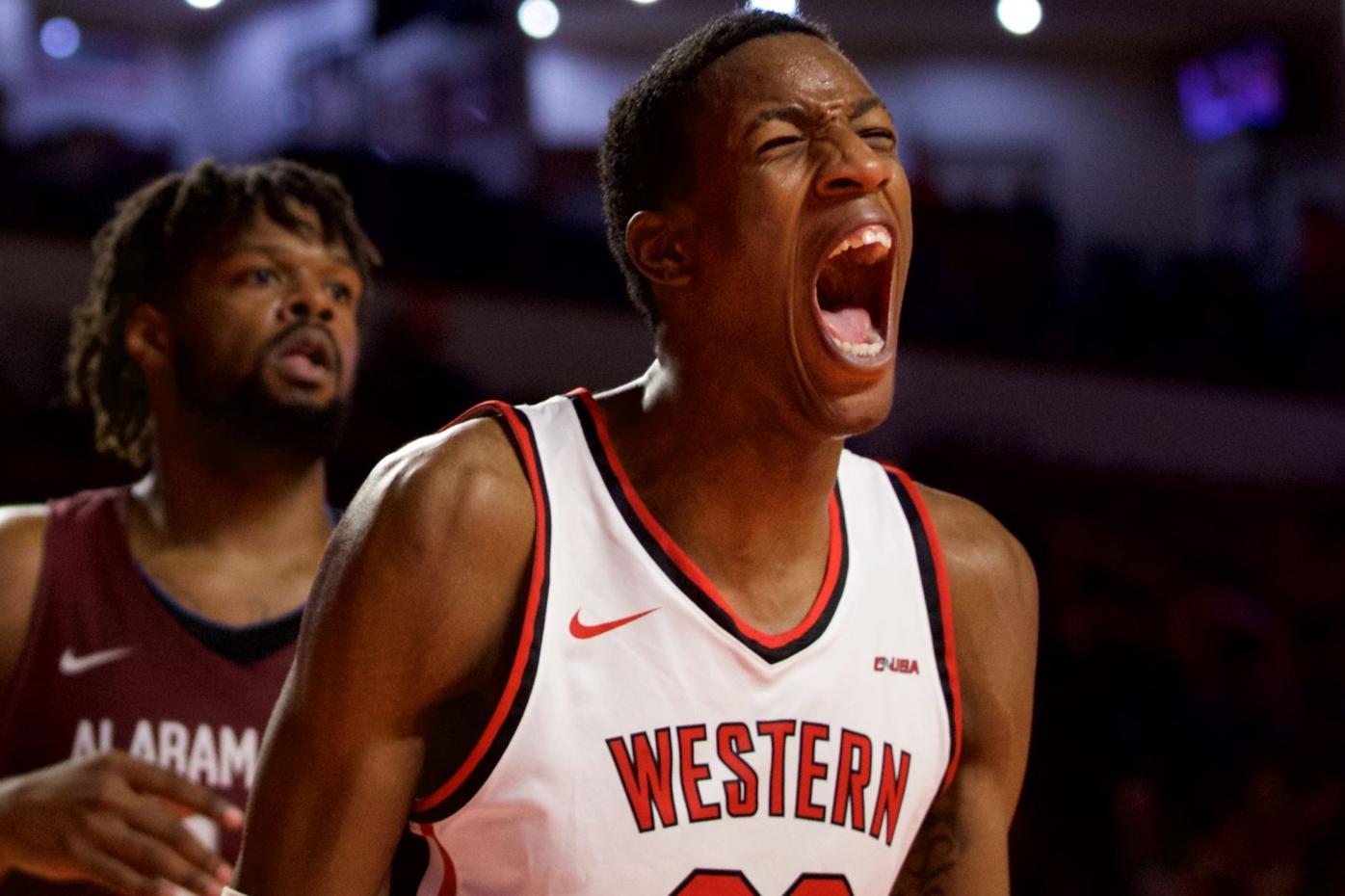 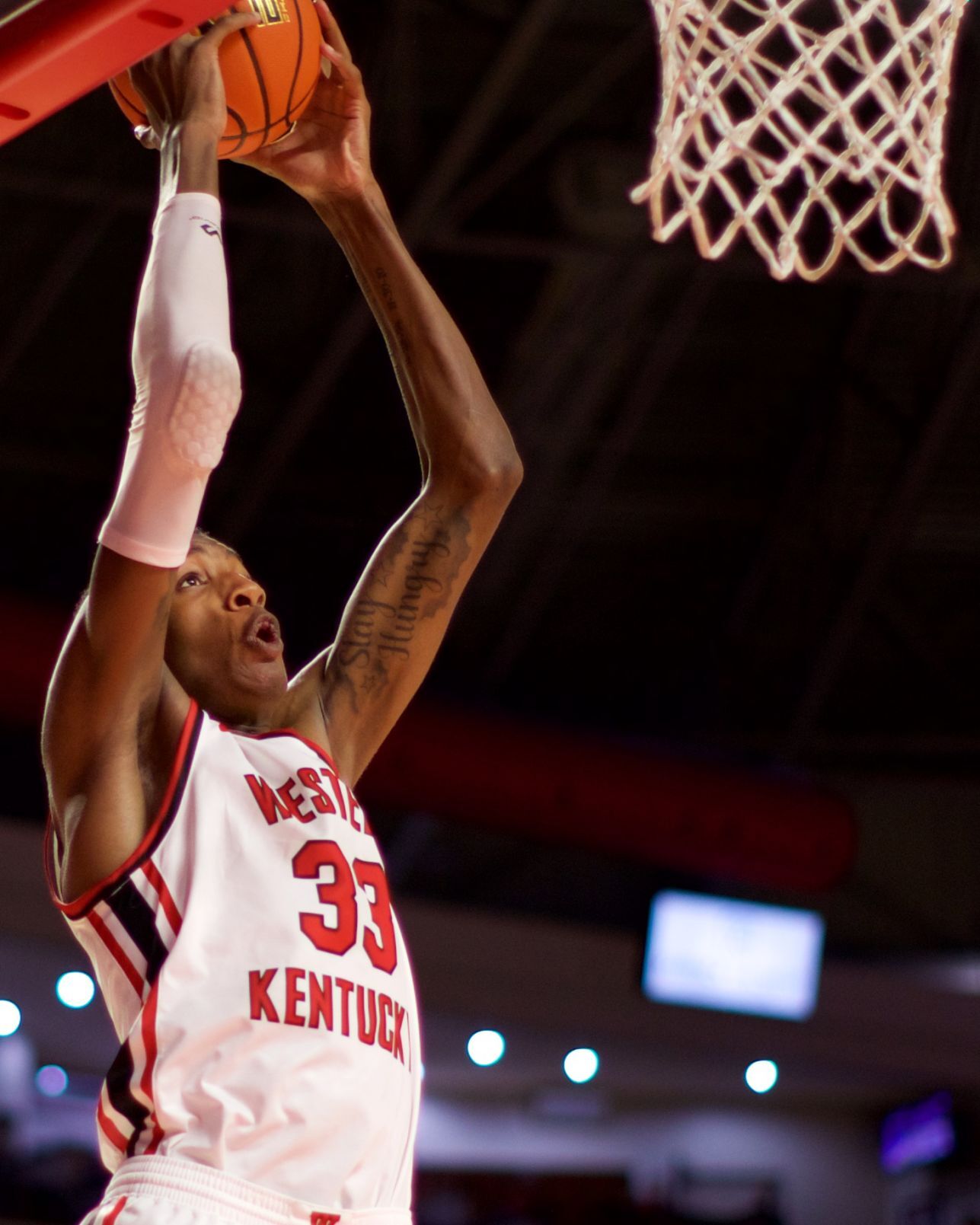 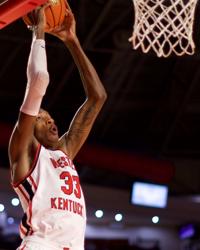 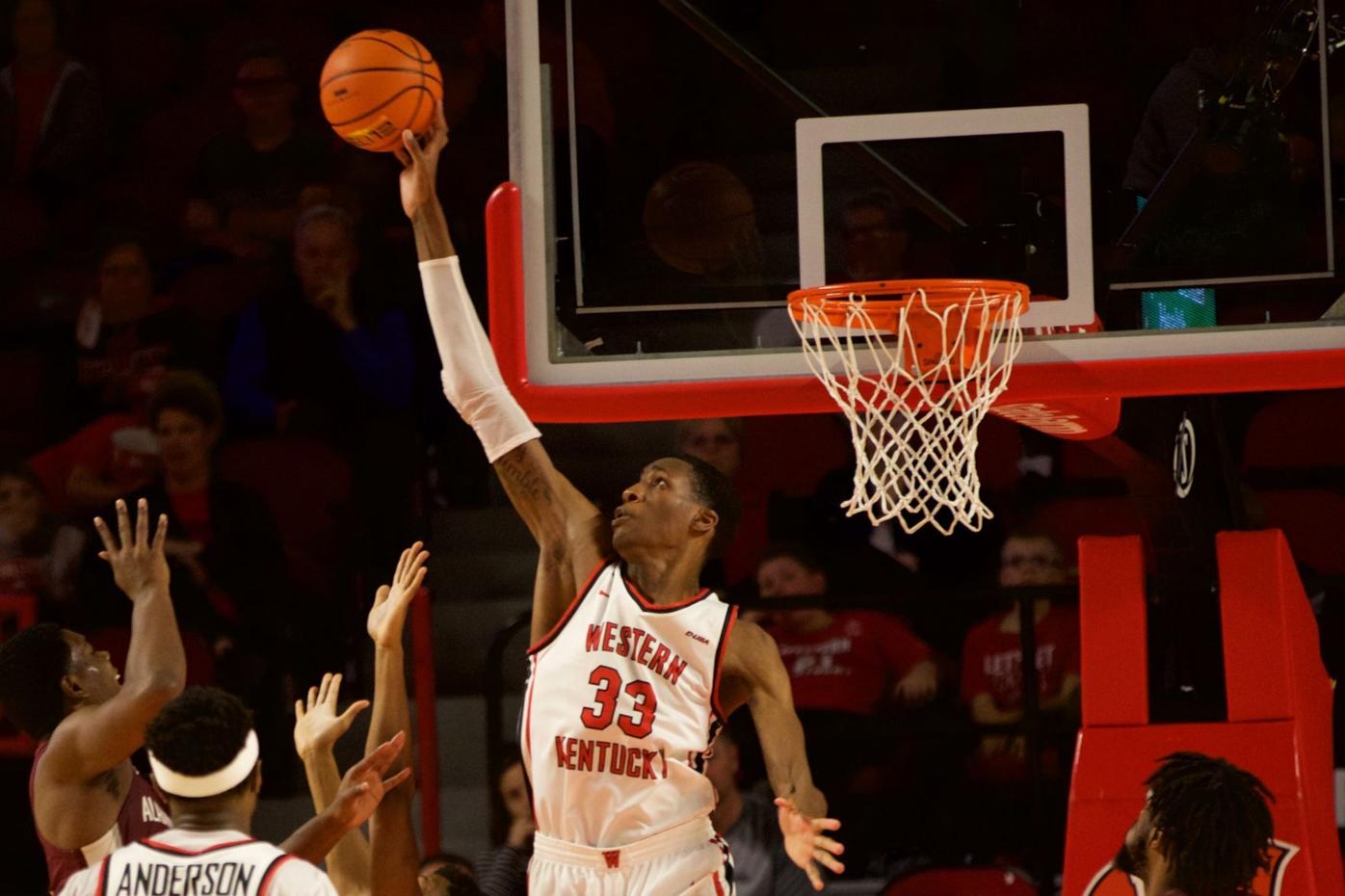 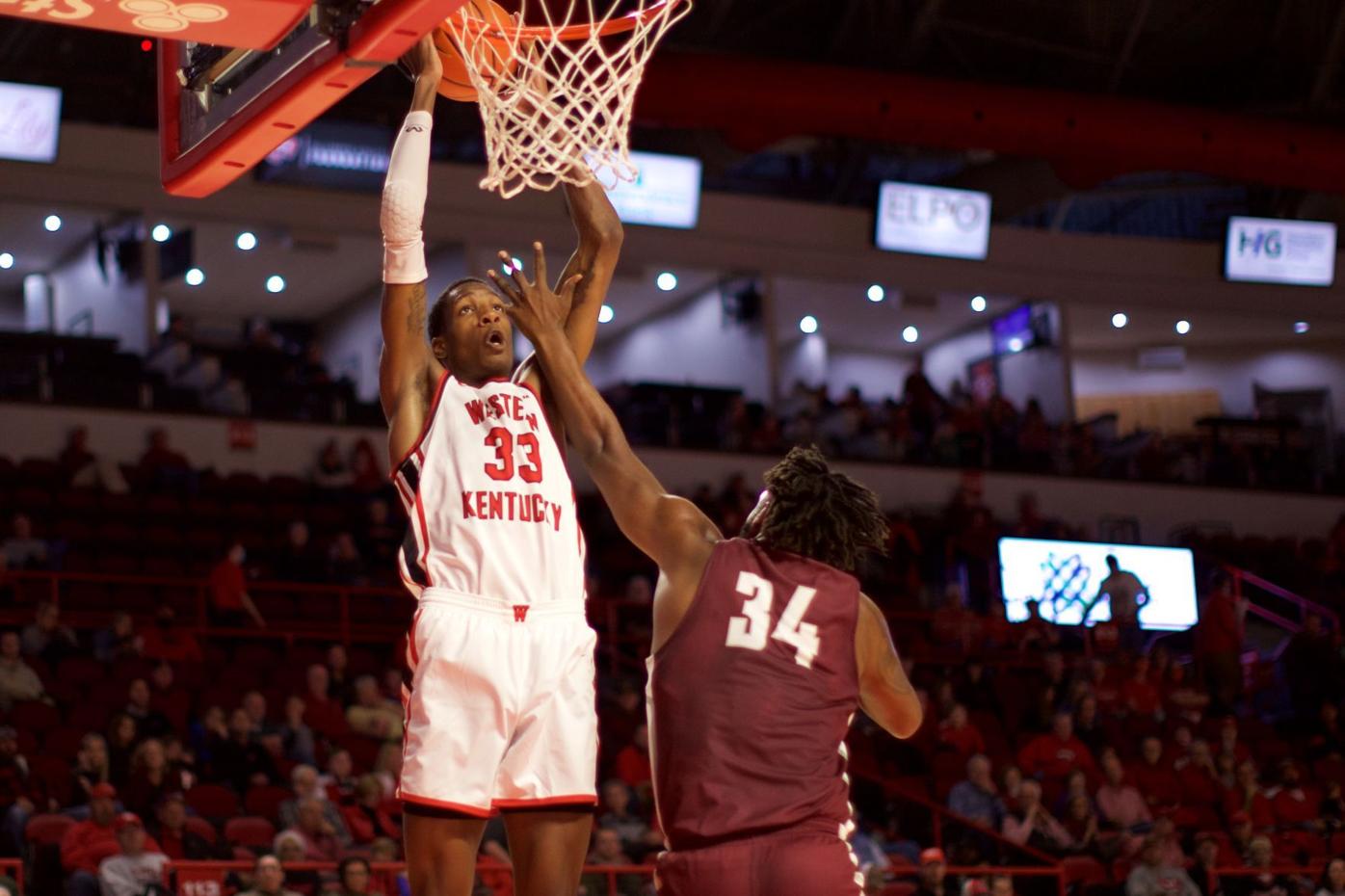 Western Kentucky junior center Jamarion Sharp (33) is fouled attempting a slam-dunk against visiting Alabama A&M up 47-25 against the Bulldogs at halftime at E.A. Diddle Arena Wednesday Nov. 24 in Bowling Green.

Western Kentucky junior center Jamarion Sharp (33) is fouled attempting a slam-dunk against visiting Alabama A&M up 47-25 against the Bulldogs at halftime at E.A. Diddle Arena Wednesday Nov. 24 in Bowling Green.

Tim Haworth sat in the front row along the baseline closest to Western Kentucky’s bench at E.A. Diddle Arena on Wednesday for the Hilltoppers’ game against Alabama A&M.

Earlier that day, the boys’ head basketball coach at Male was on the phone with Jamarion Sharp, his former player when he coached at Hopkinsville.

“He called me this morning and said, ‘Coach, I’m starting today,’ ” Haworth said. “I said, ‘Man, I’m super happy for you. I’m actually coming down to watch you play.’ ”

Haworth stood at his seat and had his phone pointed at Sharp as starting lineups were introduced. Then, he watched the 7-foot-5 center have one of the best games in Hilltopper history.

Sharp became the third WKU men’s basketball player to ever post a triple-double, finishing with 10 points, 12 rebounds and 10 blocks to lead the Hilltoppers to an 88-62 victory over the Bulldogs.

“Honestly, I felt great because I knew this was my first time starting, so I knew I had to bring energy, and since I brought energy, I spread it everywhere and it just kept going on from there,” Sharp said.

Sharp moved into the starting lineup because Jaylen Butz was sidelined with knee soreness, but had shown productivity throughout the early portion of the season. He entered the game averaging four points, 5.8 rebounds and 2.5 blocks per game in 19.7 minutes per game through four games.

By halftime Wednesday, Sharp – the tallest player in college basketball – had four points, nine rebounds and six blocks. That’s when he knew it was a possibility.

All 10 of his points came on dunks – five of the eight WKU had in the win – including one to cap off the triple-double right in front of his former coach.

Haworth said he’s known Sharp since he was 5 years old, and Sharp credits Haworth for passing his love of the game on to him.

“It really means a lot because growing up, I didn’t love the game of basketball, but Haworth, he made me keep getting in the gym more and more and made me start to love the game, so it really meant a lot for him to be there, especially my first night starting and my first triple-double,” Sharp said.

Sharp averaged just 2.9 points and three rebounds his junior year at Hopkinsville – his final year playing under Haworth, who went on to take the job at Male. It was while both were still together, however, that WKU head coach Rick Stansbury learned of his future player while scouting somebody else.

“I saw him warm up in the warm-up line and it was intriguing. First half he didn’t play,” Stansbury recalled at WKU’s preseason media day. “I went over to his coach – coach Haworth – and asked him, ‘How about the big boy?’ Coach said, ‘He’s going to be really good.’ I said, ‘Coach, why don’t he play?’ Coach says, ‘Let me warm him up at halftime.’ ”

Stansbury said he saw potential – “for a big guy, it’s all about projecting,” he said – and it led to an offer.

“Basically that night we offered him, got him up the next night to a game,” Stansbury said. “Him and I joke about it all the time, he told me that next night, ‘Coach, don’t worry about it. I’m coming to Western Kentucky.’ And that’s what he did.”

Sharp averaged 7.6 points and 3.5 rebounds as a senior, but didn’t fill the education requirements out of high school and went to play at the junior college level for two seasons at John A. Logan College.

At Logan, Sharp averaged 7.7 points, 7.3 rebounds and 5.3 blocks as a sophomore and was named an all-conference and all-region selection. He was rated as a four-star prospect and one of the top junior-college players in the nation.

He kept his word and ended up back in Kentucky with the Hilltoppers, and called his first time playing in a WKU jersey at E.A. Diddle Arena – he had 14 points, seven rebounds and three blocks in an exhibition win over Campbellsville – “amazing to play for my dream school.”

Stansbury says “he’s got a big personality, a good personality,” and it’s translated onto the floor with his energy.

The sixth-year WKU coach didn’t know he was approaching the triple-double, however.

“You all keep up with all those stats – I just know he’s active. I know he’s active,” Stansbury said after Wednesday’s win. “I know you bring that ball in the middle of that lane – he doesn’t get them all, but those he don’t get, they’re thinking about him sometimes. ... Nothing he did today – does that surprise me? Absolutely not. No. He took advantage of his first start.”

Sharp is still new to the Division I level – Wednesday was just his fifth game – and Stansbury expects some growing pains, but he’s shown he can be a difference maker on both ends of the floor.

“Again, I don’t ask him to play perfect. He’s going to make mistakes because he hasn’t played a lot now – there’s not a lot of playing experience under his belt – but I think we all, when watching him, will say, ‘He plays hard,’ ” Stansbury said. “That’s all I ask from anybody – just play hard. He gives you that, and you know, playing hard is contagious.”

So while he’s literally the closest player to the ceiling each night he steps on the floor, Sharp might still be the one furthest away from his own.

“It’s funny, I was talking with a couple guys in the NBA actually today, and I honestly think he’s going to be a first-round NBA draft pick. I really do,” Haworth said. “I’ve only said that about a couple players. ... But Jamarion – 7-5, he can run the floor, athletic, rebounds the ball, blocks shots – he has a chance.”