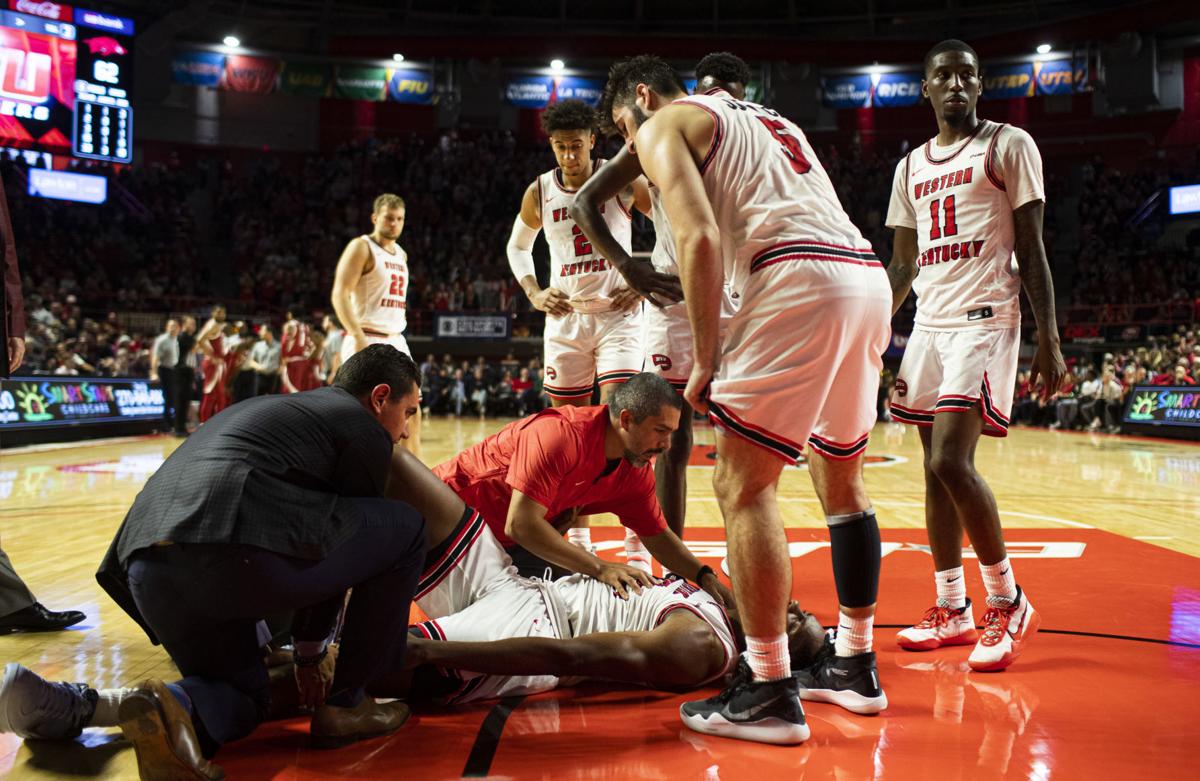 Athletic trainer John Erwin walks to Western Kentucky Hilltoppers center Charles Bassey (bottom) after he went down with a knee injury during WKU’s 86-79 win in overtime over Arkansas on Saturday at E. A. Diddle Arena. Bassey will miss the rest of the year after undergoing season-ending surgery Tuesday morning in Houston.

Athletic trainer John Erwin walks to Western Kentucky Hilltoppers center Charles Bassey (bottom) after he went down with a knee injury during WKU’s 86-79 win in overtime over Arkansas on Saturday at E. A. Diddle Arena. Bassey will miss the rest of the year after undergoing season-ending surgery Tuesday morning in Houston.

The player most central to Western Kentucky’s identity will now miss the remainder of the season.

Sophomore center Charles Bassey is ruled out the rest of the year after an injury to his left knee in the final minutes of the Hilltoppers’ overtime victory over Arkansas on Saturday at E.A. Diddle Arena.

A CT scan, X-ray and MRI tests Sunday and Monday revealed a tibial plateau fracture in his left leg and will require season-ending surgery. The university made the news official Monday with a statement that Bassey will have surgery in Houston on Tuesday.

WKU coach Rick Stansbury flew to Houston on Monday to be with Bassey for his surgery Tuesday morning. The coach called into his weekly radio show Monday night and said Bassey is in good spirits knowing he has the best physicians treating his injury.

“For any young man to go through this, a player like himself that has so much expectations and things he wants to do, it’s very obvious it’s a setback and would be for any athlete or any person,” Stansbury said on his radio show. “But to his credit, he’s in as good of spirits as he can possibly be considering what he went through and understands it doesn’t change anything in his life.

“It just prolonged a little longer than he anticipated, but I think he feels good with the evaluations and we feel confident he can make a full recovery through this.”

Bassey will start the rehab process immediately following surgery with anticipated recovery time expected to last six to nine months. The university announced that Bassey’s surgery will be with physicians for the NFL’s Houston Texans and NBA’s Houston Rockets, the same physicians who performed surgery to Texans defensive end JJ Watt when he suffered a similar injury in 2017.

Stansbury said after Saturday’s win over Arkansas that there was swelling in Bassey’s left knee shortly after he was assisted off the court with 3:40 remaining in the second half. Bassey attempted to grab a loose ball when he went down hard holding his left knee in visible pain.

The coach said there were no signs of tears to his {span}anterior cruciate ligament (ACL) or medial collateral ligament (MCL), although surgery could reveal otherwise on Tuesday.{/span}

{span}”With people’s different opinions, most of the time when you have that fracture, there’s ligament damage,” Stansbury said. “But in his case, we all feel like at this point all those ligaments are intact. When they get into surgery and there’s something that hasn’t shown up or they haven’t seen, it may be different. But right now everybody feels like the ACL and MCL and all that is in place. That’s a blessing in itself there.”{/span}

Bassey dealt with right knee complications when he arrived to WKU as a 17-year-old freshman last season, but he started all 34 games and started WKU’s first 10 games of this season.

The 6-foot-11 center’s future with the program is now in the air. Bassey is considered one of the top five centers in college basketball and expected to enter the 2020 NBA Draft. As a freshman, Bassey participated in the NBA scouting combine and withdrew his name from draft consideration at the last second in May, opting to return to WKU for his sophomore season.

That added a crucial piece to WKU’s core of returners coming off a season where he was named the Conference USA Freshman and Defensive Player of the Year, averaging 14.6 points and 10 rebounds per game.

Bassey was the team’s leading scorer at 15.3 points and 9.2 rebounds in the first 10 games. WKU won’t play for at least another week until the Dec. 17 matchup against Kentucky Wesleyan.

Stansbury pointed to the fight his team showed after Bassey left the game to fight back and beat Arkansas in overtime. The Hilltoppers trailed by six late, then forced overtime and outscored the Razorbacks 13-6 in the extra frame.

“We all know how valuable Charles is,” Stansbury said. “Our goals haven’t changed. Naturally, that fine line got thinner, but we got some good players in that locker room and some other players that step up to another level. From that standpoint, it’s very obvious it won’t be as easy doing what we do. These guys believe just like we believe in them that this can be a really good basketball team and I think it’s very obvious in those last minutes that there’s no quit in this team.”{&end}{&end}