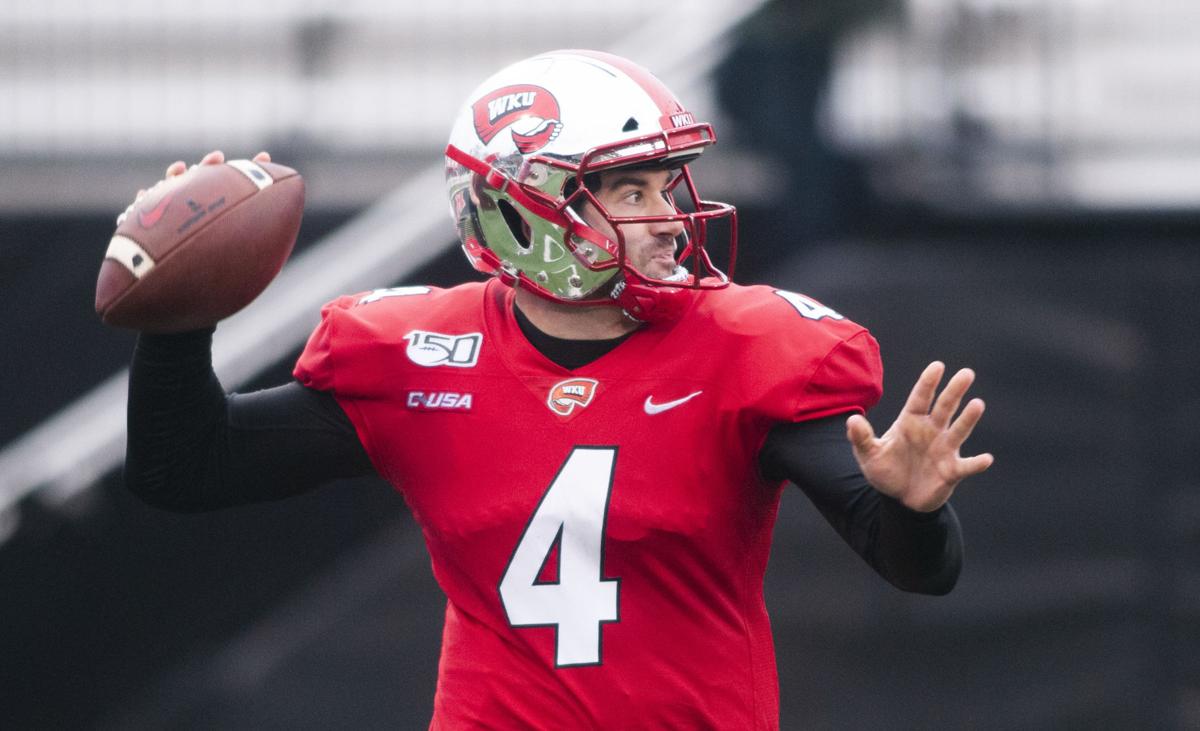 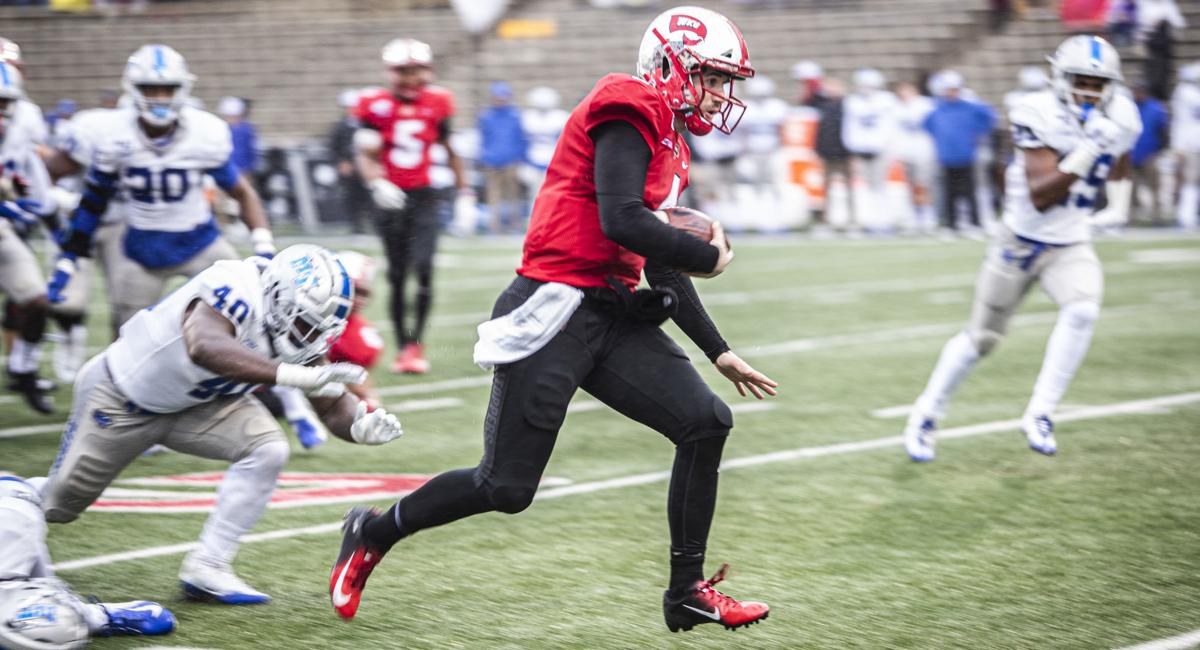 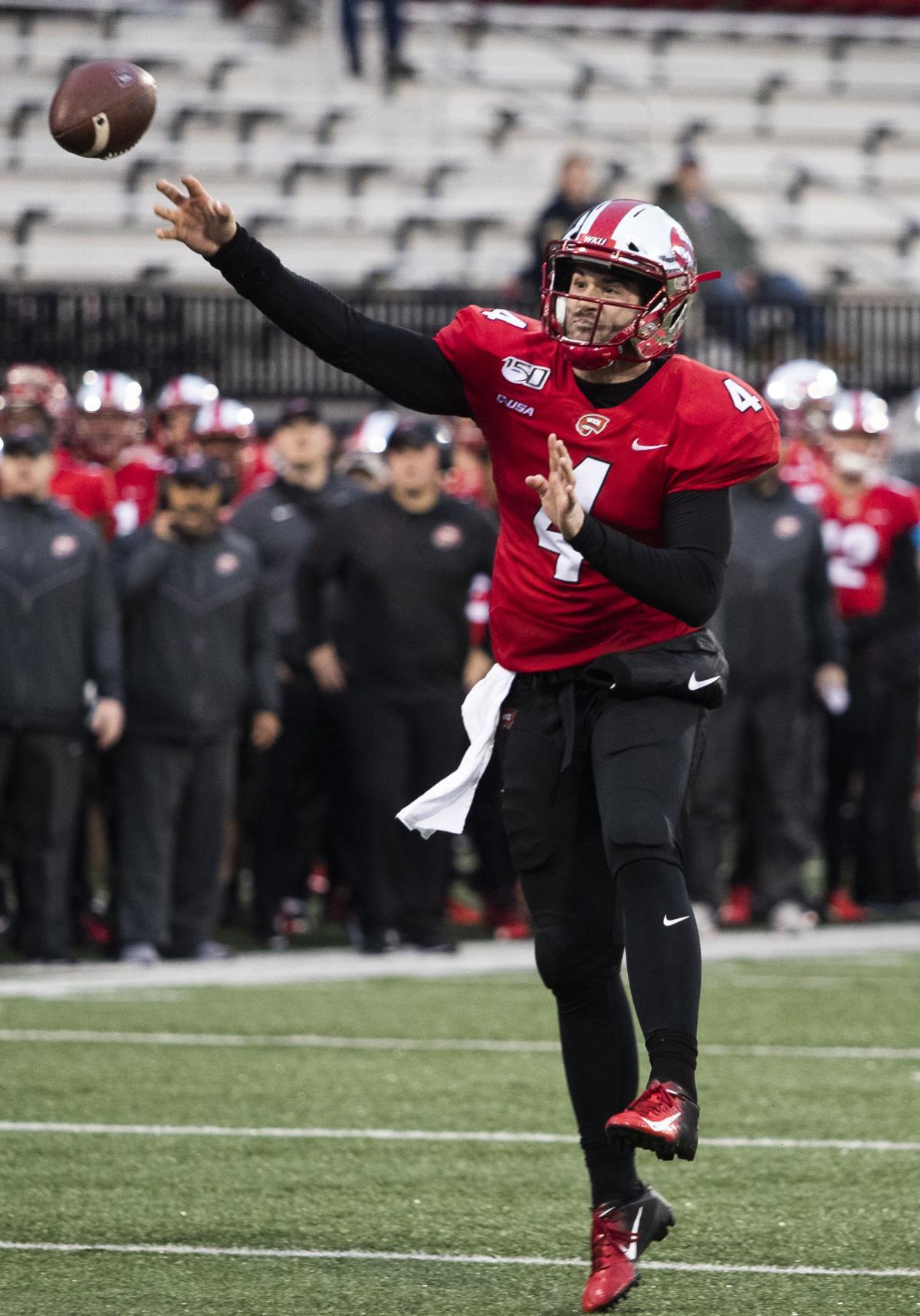 Ty Storey transferred to Western Kentucky with one year left to revive his quarterback career.

With one game remaining, Storey has not only done that, but brought the perfect level of consistency the Hilltoppers needed to reach eight wins in Tyson Helton’s first season. When an injury opened the door for Storey to take over, he went on to produce one of the most efficient seasons a quarterback has had at WKU.

“Says a lot about the type of man he is and the character he has,” Helton said. “That’s what good men do. When things don’t go your way initially, you keep grinding and you sit there and wait your turn. God always has a plan.”

The Hilltoppers’ senior quarterback turned in his best all-around performance in his last game at Houchens-Smith Stadium. Storey completed 23 of 30 pass attempts for 294 yards and two touchdowns and added 62 rushing yards and a career-long 27-yard run for WKU’s first touchdown in a 31-26 win over Middle Tennessee on Saturday.

Storey’s 76.7 percent completion rate was his best single-game efficiency since he took over the starting job Sept. 28 against UAB after Steven Duncan suffered a season-ending injury with a broken foot.

The graduate senior completed no less than 62.5 percent of his passes in any of the nine games he started. Storey went 7-2 in his starts and now the Hilltoppers sit 8-4 and awaiting news this weekend on where they’ll play a bowl game.

“It’s been one of the more fun years to be a part of,” Storey said. “A lot of it is the group of guys, the coaching staff and everyone and winning on top of that, it’s a feeling you wish everyone could feel. Just how close we came together for the year, the ups and downs and everything, at the end of the day it’s made us closer and realize it’s something bigger than individual people.”

His 70 percent completion rate leads Conference USA and ranks eighth nationally, but is the highest among quarterbacks from Group of 5 schools.

If the season were to end today, Storey would finish with the second-highest completion percentage by a WKU quarterback in a single season. Brandon Doughty’s 71.9 percent completion rate in 2015 ranks first in school history.

Storey’s play in the home finale included the most all-purpose yards (356) he’s gained this season. With one game remaining, he’s connected on 206 of 294 of his pass attempts for 2,209 yards and 12 touchdowns against five interceptions. He’s thrown 92 straight passes without an interception dating back to WKU’s Nov. 2 loss to Florida Atlantic.

The Charleston, Ark., native is also the team’s second-leading rusher with 246 yards and seven touchdowns. To top it off, he’ll leave WKU with at least one receiving touchdown against Charlotte.

Storey’s efficiency in protecting the football has been a big reason for WKU going without a turnover during its three-game winning streak to close the season. Defensive end Juwuan Jones said Storey’s impact spreads throughout the locker room, not just one side of the ball.

“Ty is a very good leader,” Jones said. “You can just feel his presence and leadership capability when you’re on the field. You can tell he takes command and he motivates everyone. He’s never down on himself or other teammates. When a receiver drops the ball, he throws a money ball. That’s the type of leadership winning programs have.”

Storey had to wait his turn, however. When he transferred from Arkansas last winter, he competed with Duncan all through the spring and into fall camp. Duncan earned the starting nod and played the first three games as WKU went 1-2. Storey played one snap in that span with a rush attempt against FIU.

He became the starter and immediately established his versatility with 13 carries in his first start against UAB. Since then, the 6-foot-2, 225-pound senior has had just two games where he rushed fewer than 10 times.

His best game in those terms came in his return trip to Arkansas, where he rushed 17 times for 77 yards and two scores against his former team.

One more game remains for Storey to make another mark as perhaps the biggest reason the Hilltoppers are even in the postseason.

“The quarterback is somebody you believe in and trust and if you always have a chance to win a game, your team rallies around that,” Helton said. “They believe in that and that’s probably what’s given us a lot of the momentum, especially for our defense. They know if we get the ball to the offense, they’ll find a way to get it done as long as Ty is the quarterback.”{&end}