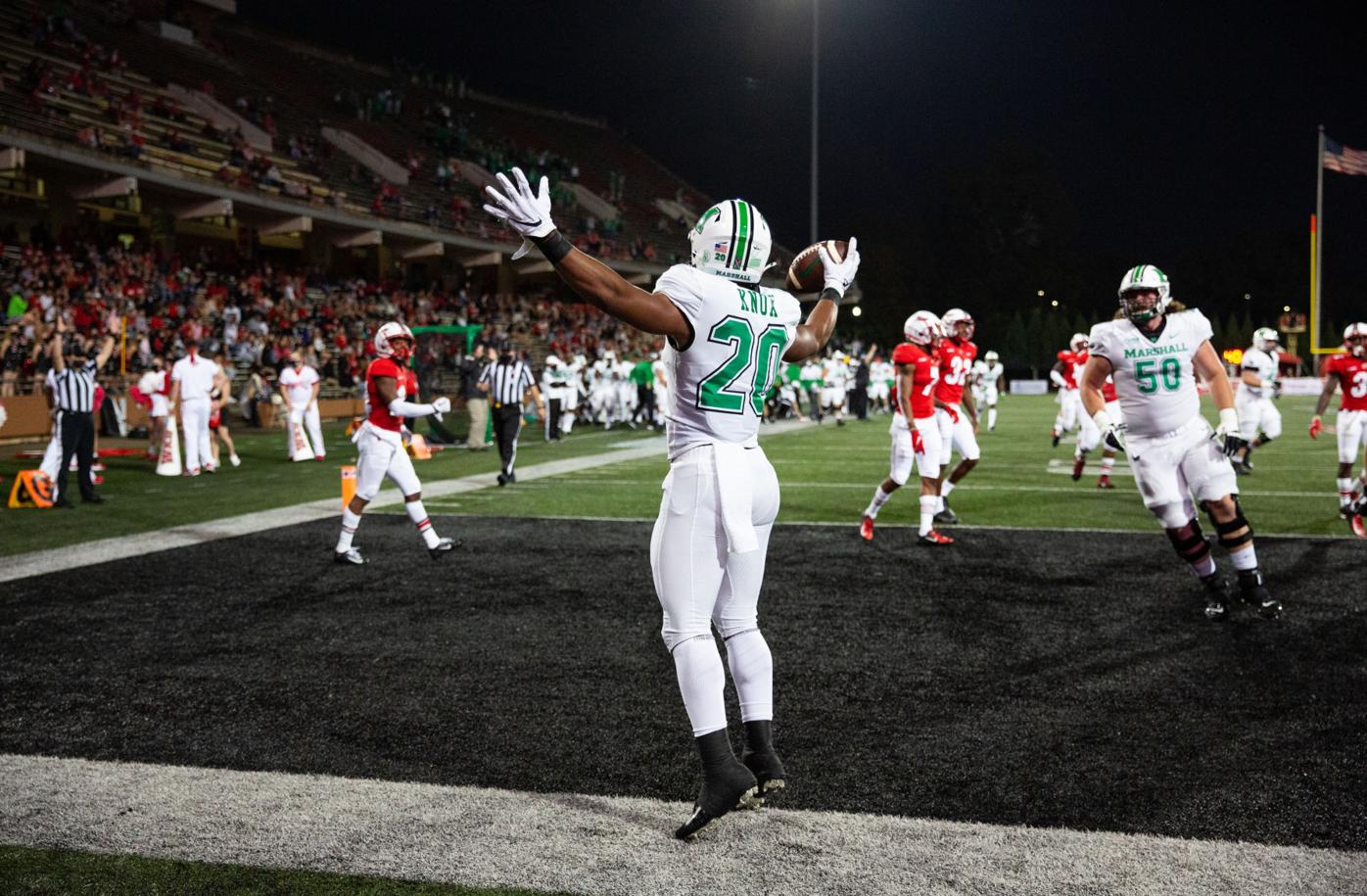 Marshall running back Brenden Knox celebrates after a touchdown run during the Thundering Herd’s 38-14 win over Western Kentucky on Saturday at Houchens-Smith Stadium. 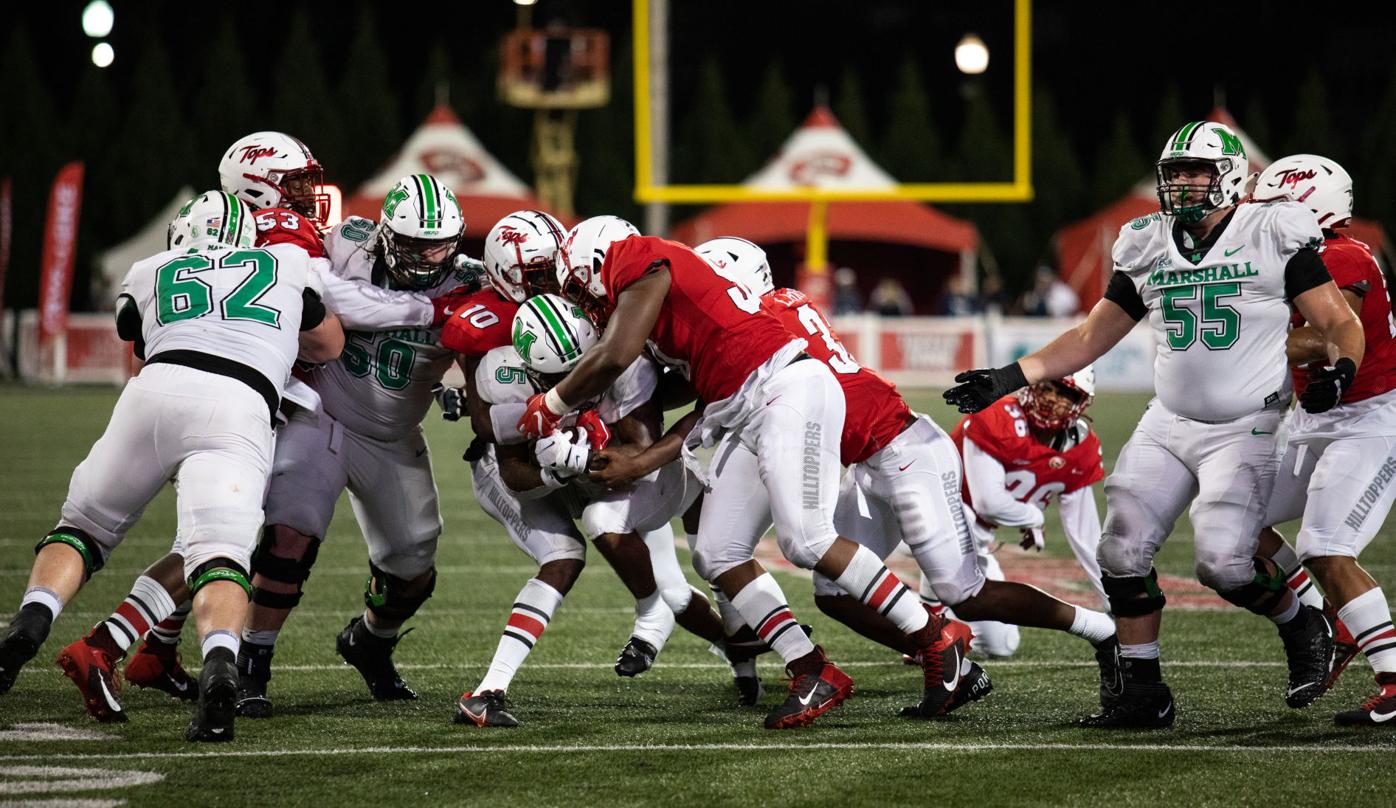 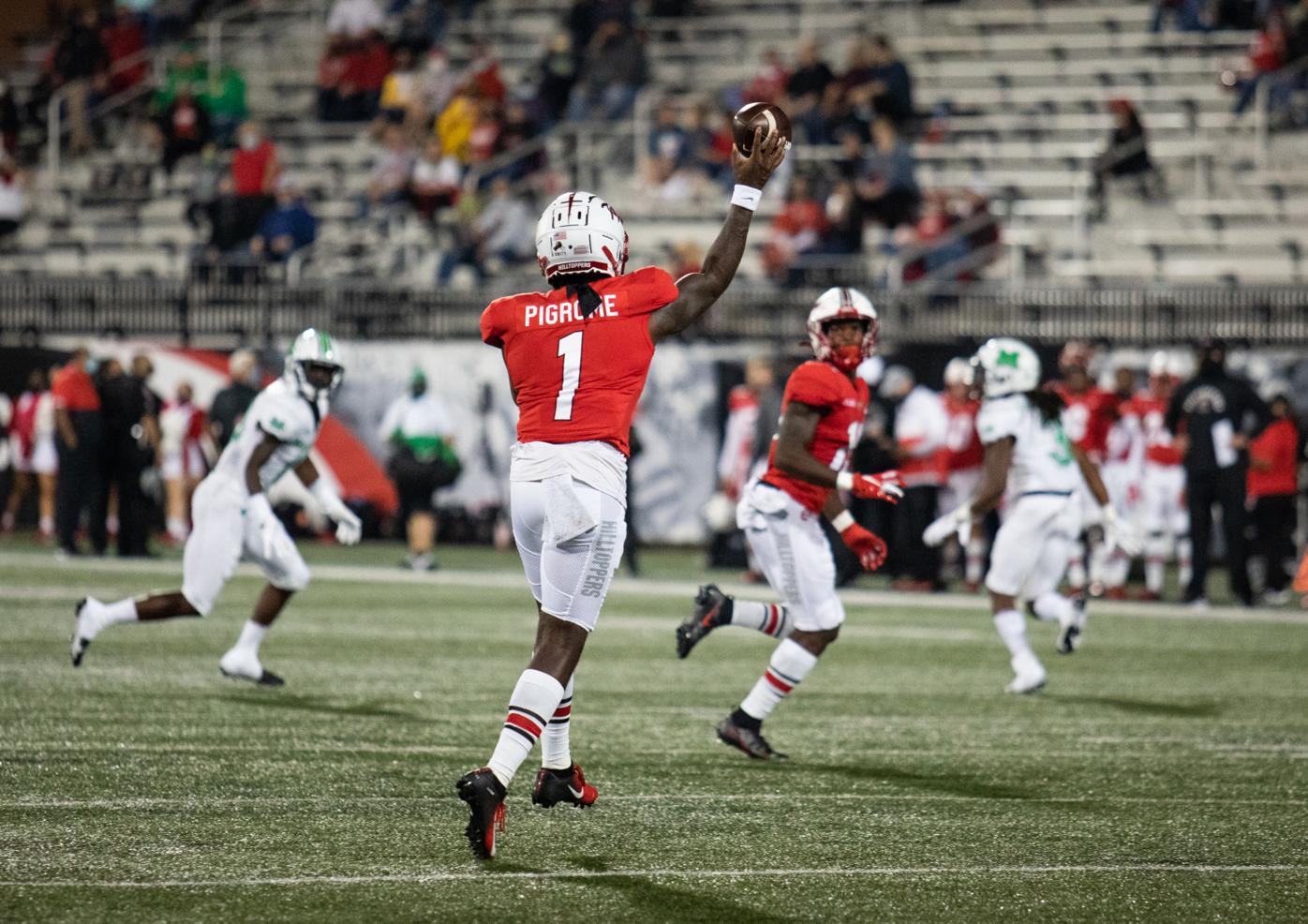 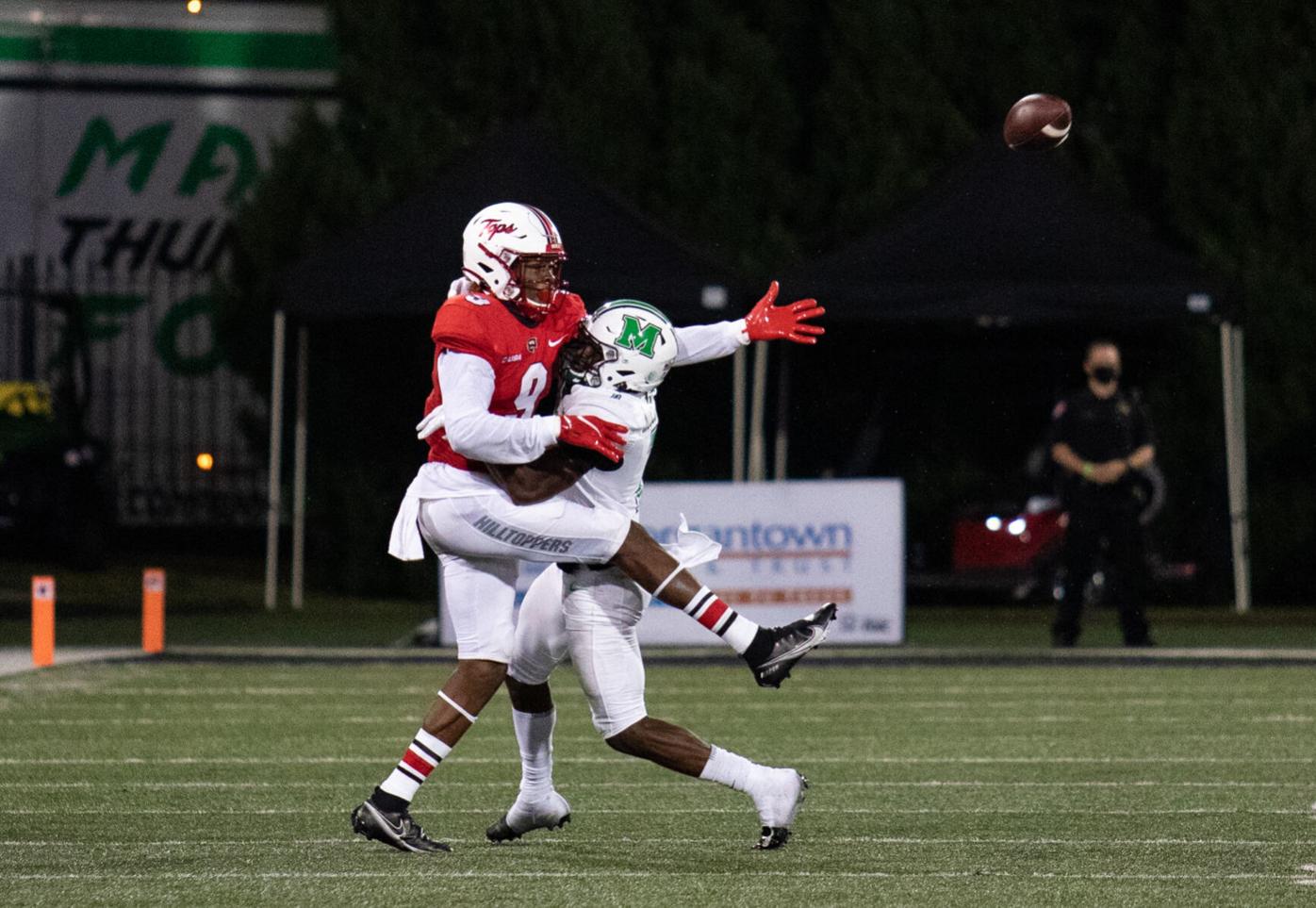 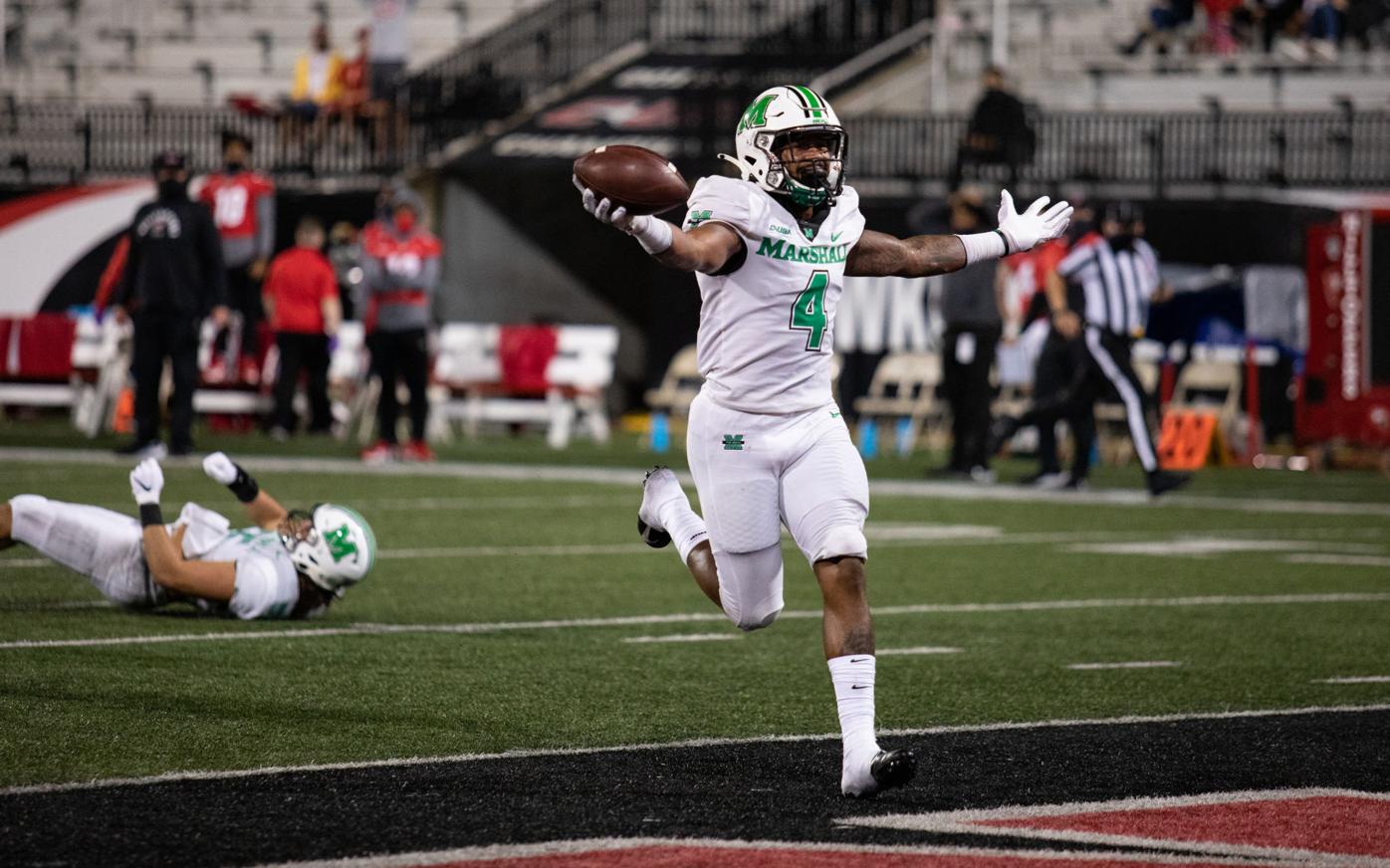 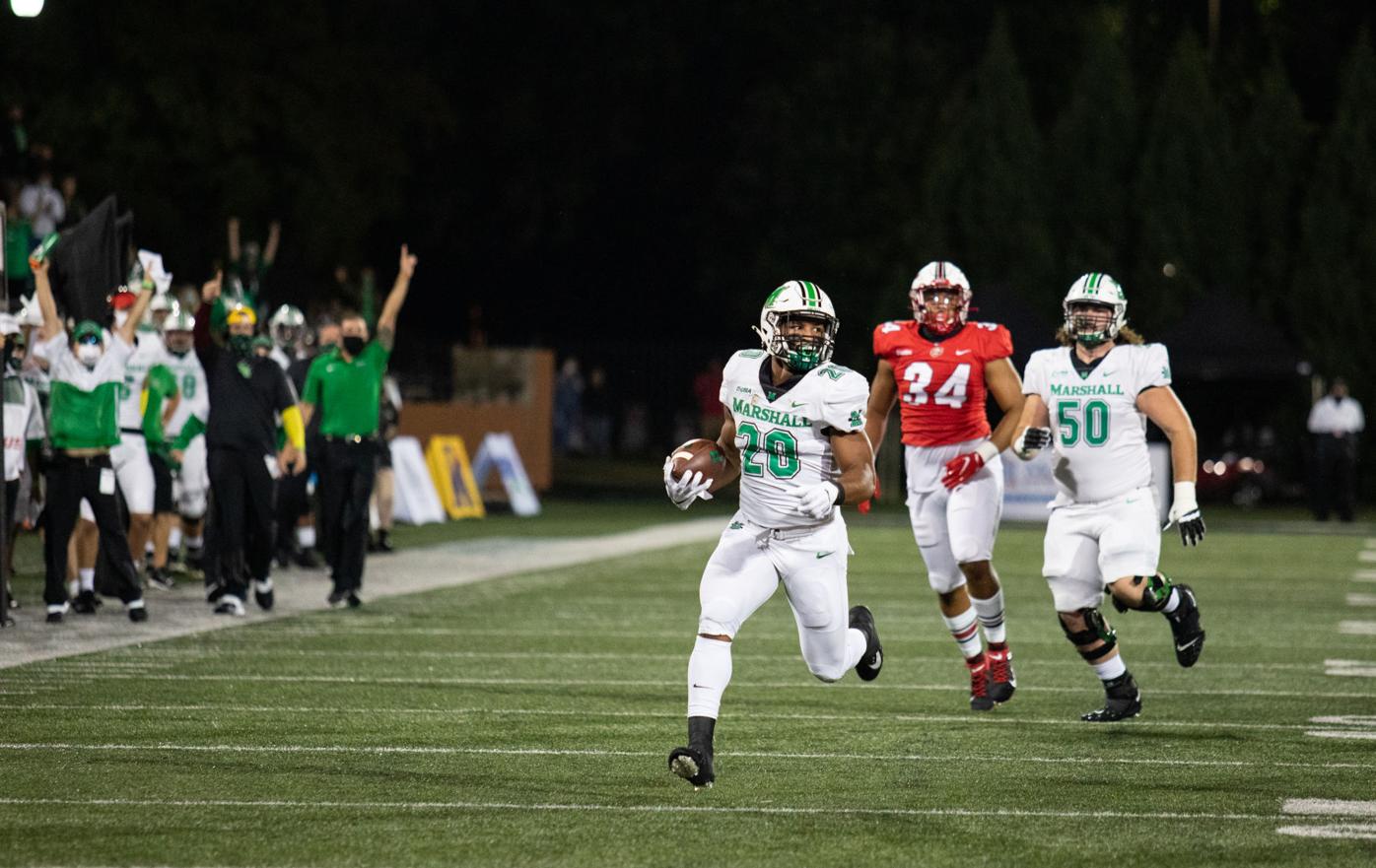 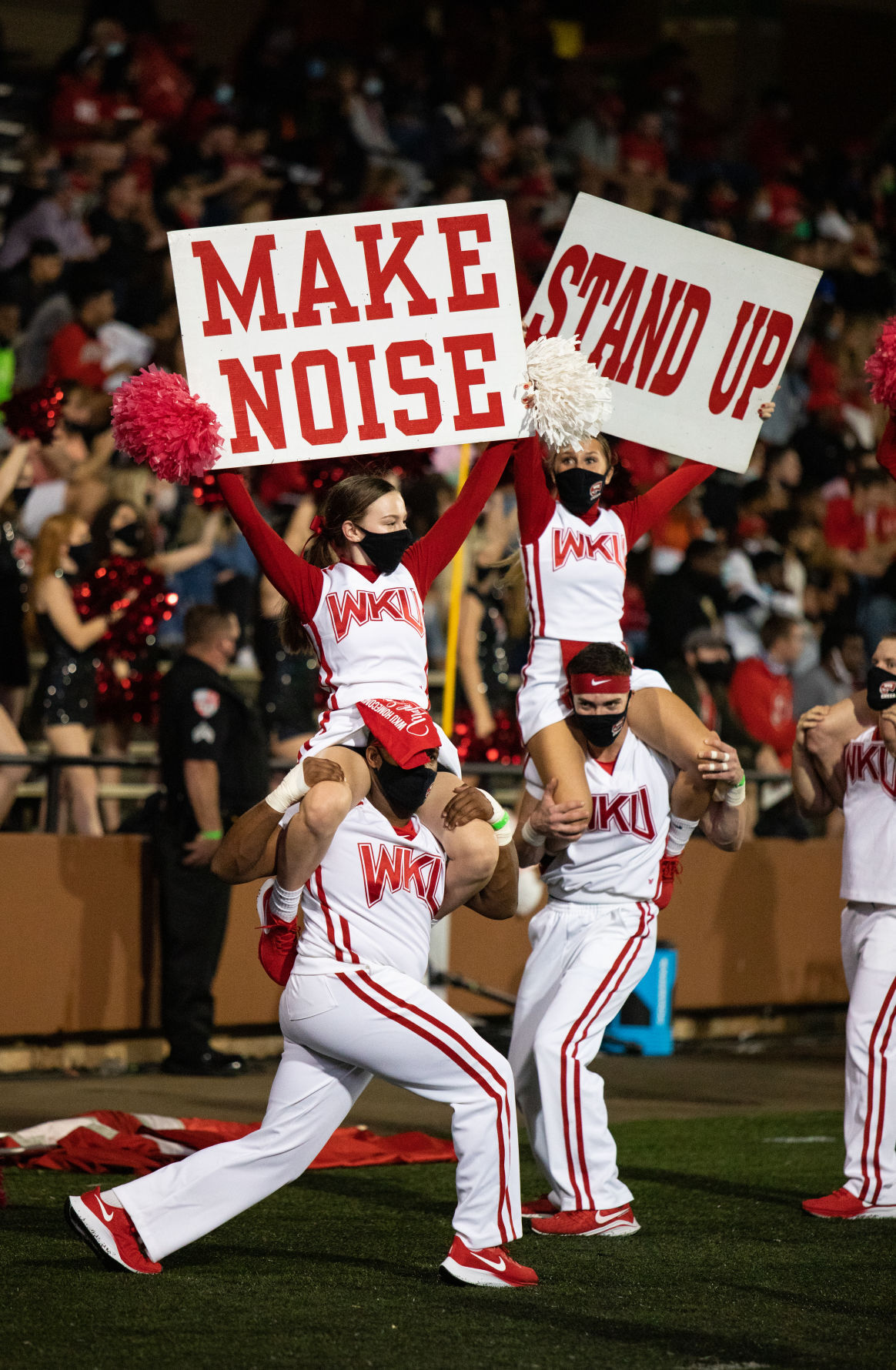 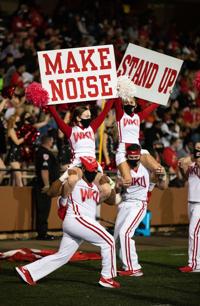 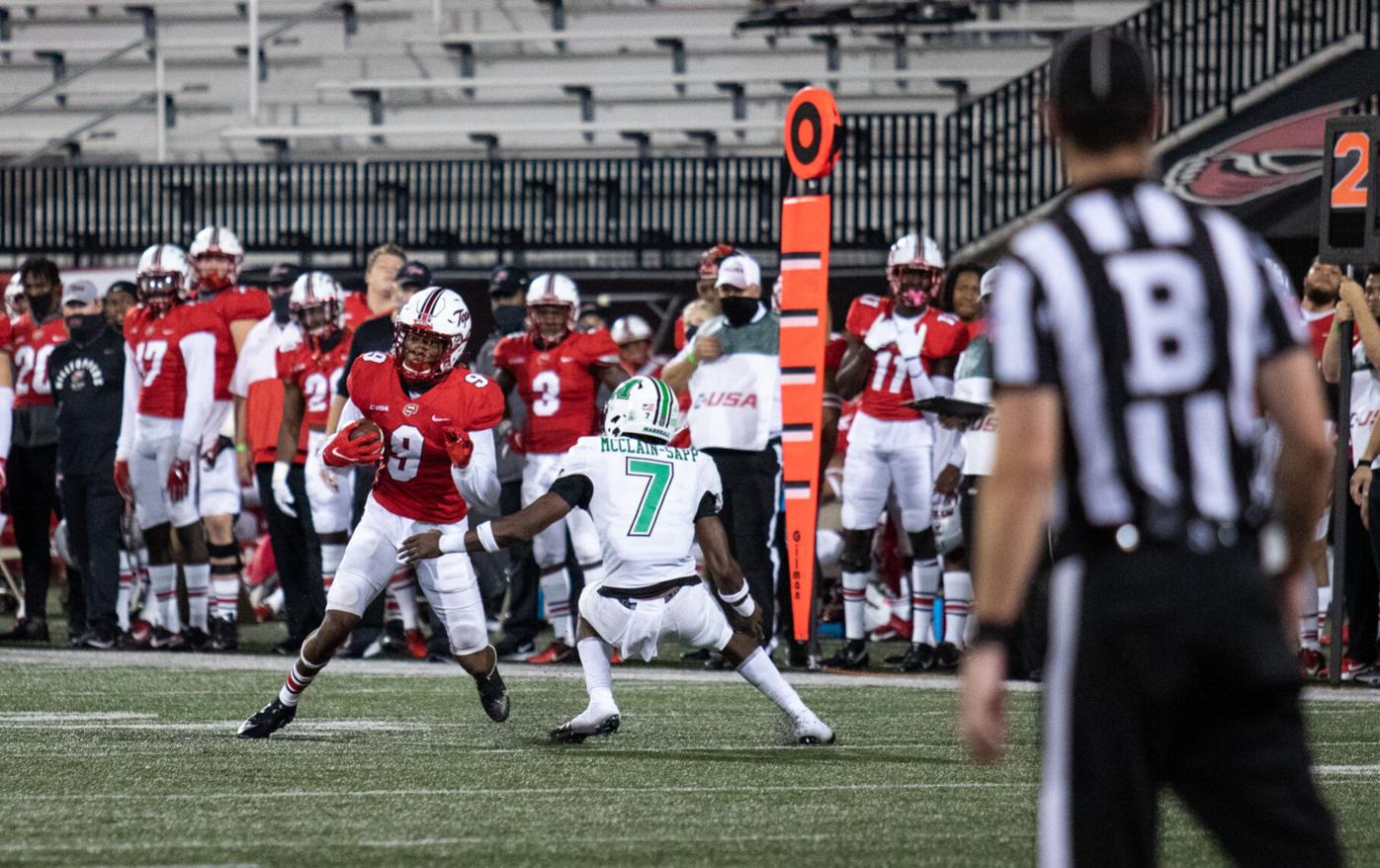 Marshall running back Brenden Knox celebrates after a touchdown run during the Thundering Herd’s 38-14 win over Western Kentucky on Saturday at Houchens-Smith Stadium.

Any momentum Western Kentucky hoped to carry over from last week’s victory at Middle Tennessee into Saturday’s homecoming game against Marshall was short lived.

Marshall added three more touchdowns in the first half, WKU’s offense struggled and the Thundering Herd cruised to a 38-14 victory over the Hilltoppers at Houchens-Smith Stadium – Marshall’s fourth-straight victory over WKU.

“Obviously a disappointing game. A lot of things went wrong, particularly offensively,” WKU head coach Tyson Helton said. “A good Marshall team we just played. They’re a very talented team, but that’s no excuse for the poor execution that we made, particularly offensively for most of the game. We’ll rebound, wake up tomorrow and get ready for UAB.”

Wells finished the first half with 137 yards on 12-of-16 passing and had 162 yards on 16-of-22 passing in the game, but Knox – the 2019 Conference USA Most Valuable Player – starred through the first two quarters. After his 45-yard scoring run, he posted touchdown runs of 1 and 9 yards, with the latter two coming in the second quarter to put the Thundering Herd (3-0 overall, 1-0 Conference USA) up 28-0 heading into the break. He had 82 yards on 10 carries in the half and finished with 107 yards and three touchdowns on 15 carries.

Marshall also had a 5-yard scoring run from Sheldon Evans with 2:21 left in the first quarter which made it 14-0. The run followed a bruising 23-yard run from the 5-foot-11, 200-pound redshirt junior. He had 36 yards on six carries in the first half – the Thundering Herd averaged 7.3 yards per play through two quarters – and finished with 64 yards on 14 carries.

While Marshall’s offense moved like a well-oiled machine against a WKU (1-3, 1-1) defense that was coming off its best performance of the season in a 20-17 victory at Middle Tennessee, The Hilltoppers’ offense was a different story.

WKU had just 79 yards in the first half and Marshall’s defense forced three three-and-outs in WKU’s seven possessions, plus two fumbles that they converted into scores. The Hilltoppers had just three first downs, were 1-for-6 on third down conversions and had just 4 yards rushing on two attempts – both by Gaej Walker – from its running backs by the break. Quarterback Tyrrell Pigrome accounted for 28 yards rushing and 48 passing in the first half as Marshall built its 28-0 lead.

Marshall added a third-quarter touchdown when Jakairi Moses dropped a handoff from Pigrome and Tavante Beckett returned it 38 yards untouched to the end zone to make it 35-0. The Thundering Herd also had a 28-yard field goal from Shane Ciucci in the quarter to make it 38-0.

“I thought it was a pretty bad performance as a team overall,” Helton said. “I didn’t think we ran the ball very well, we didn’t throw it, we put it on the ground, turned it over, gave them an easy touchdown on a power read – just dropped the football on the ground for them to pick up and run in. As a head coach, the first thing I’ve got to do is look at me and say, ‘OK, how do I get better to help the football team?’

“I didn’t see a lot of positives. I saw a lot of good men fighting and kept battling and tried to do their best. If there was a positive out of it, I thought there was some men that were trying to do their best out there even though it was a tough night.”

Kevaris Thomas entered the game at quarterback for WKU following Beckett’s touchdown, and after a three-and-out his first series in, the Hilltoppers found the end zone on his second. With 92 yards of offense to that point, WKU put together a five-play, 75-yard scoring drive highlighted by a 51-yard completion to Xavier Lane from Thomas, who capped off the drive with a 2-yard touchdown run two plays later on the final play of the third quarter.

“We had a very big talk about unity tonight before the game and we just said, ‘No matter what happens, we’ve got to stick together,’ “ Thomas said. “That’s what I did, is went in and stuck together with my offense.”

The Hilltoppers had 294 yards in the game. Thomas had 148 yards on 9-of-18 passing and led the team with 30 yards rushing on seven attempts. Pigrome finished with 61 yards passing on 12-of-21 passing and 28 yards on seven carries. WKU’s running backs – a group that struggled to produce in the team’s first three games – accounted for only 28 of its 85 yards rushing.

Helton said the staff evaluates every position group after games, and said about the quarterback position “we’ll see what happens, but yeah, as of today, Piggy is the quarterback.”