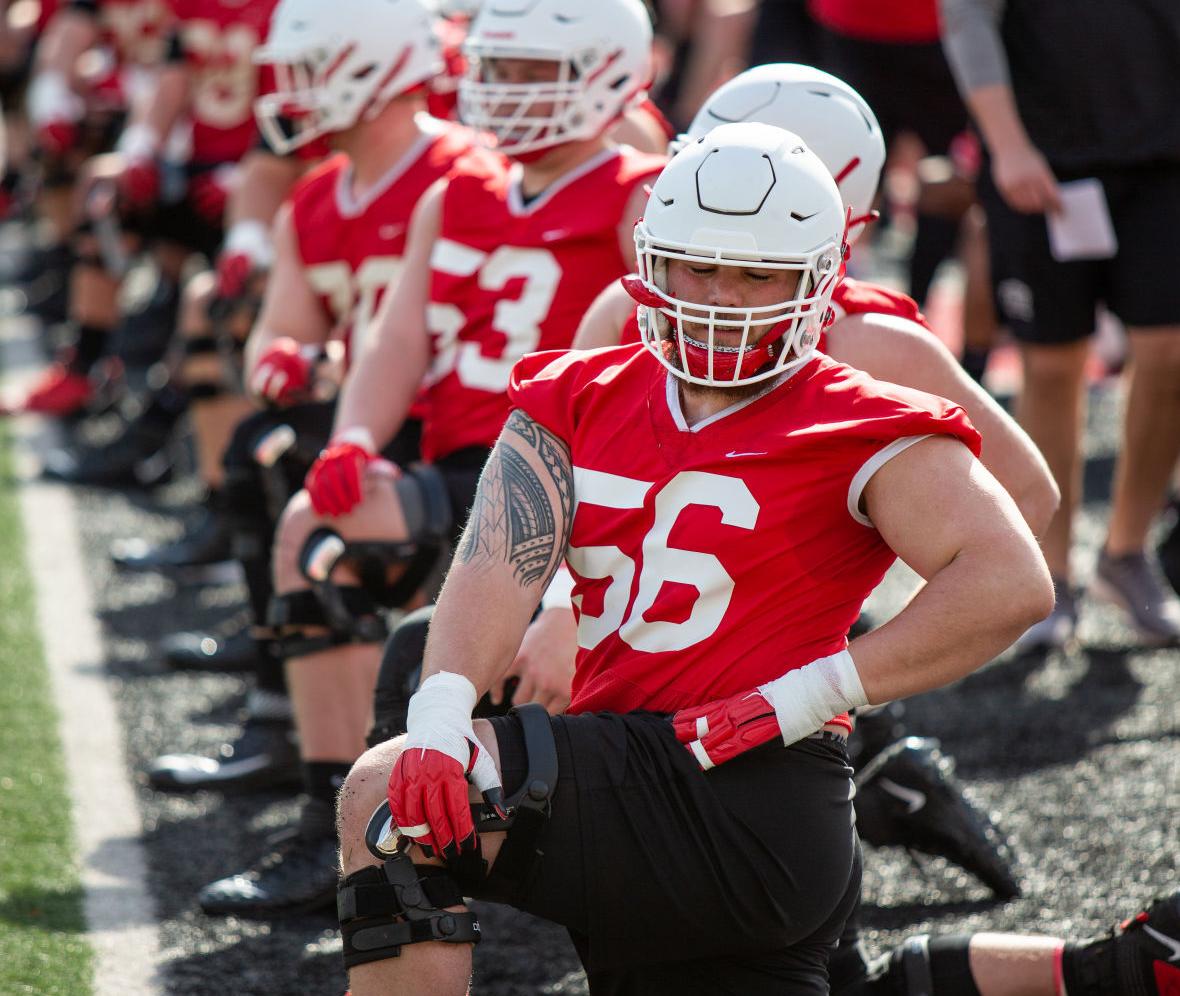 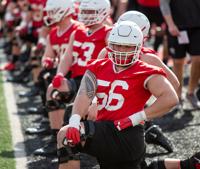 Western Kentucky offensive lineman Boe Wilson stretches with his teammates at the beginning of practice March 16 at Houchens-Smith Stadium. 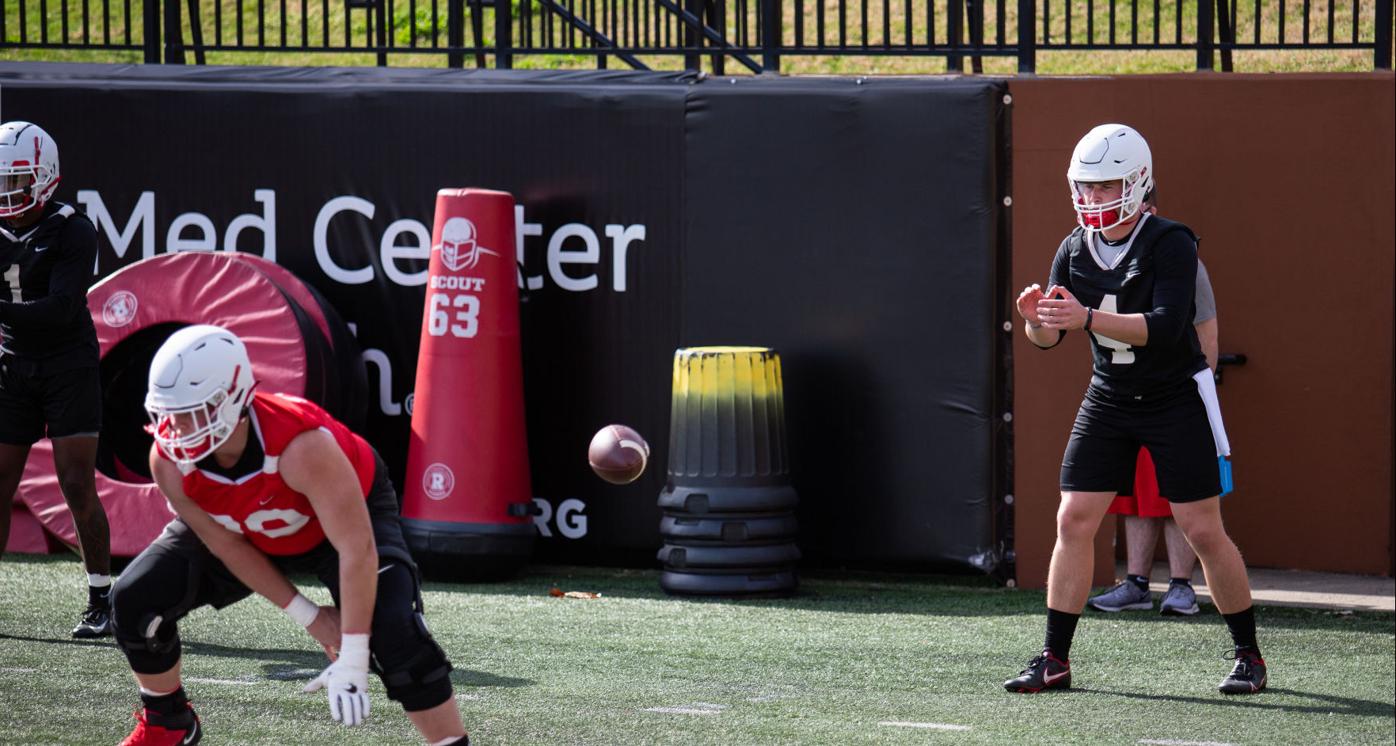 Western Kentucky offensive lineman Boe Wilson stretches with his teammates at the beginning of practice March 16 at Houchens-Smith Stadium.

As one of Western Kentucky’s most experienced returning players, Cole Spencer stepped in front of the webcam to address the media via Zoom the day before the Hilltoppers got their spring practices underway.

The redshirt junior appeared on screen with a short, clean-cut hairstyle and delivered serious, to-the-point answers about the team’s offseason and what it hoped to accomplish over the next several weeks.

After the team’s eighth practice, Mason Brooks sat in front of the camera, ran his fingers through his mullet and provided anecdotes and laughs to back up his points about this year’s group of Hilltoppers and what he’d seen so far in the team’s workouts.

Spencer and Brooks are WKU’s returning starters along the offensive line – at left and right tackle, respectively – and bring opposite styles from the opposite ends, but the two have the same goals as they’ve tried to lead a new-look group in the trenches as part of a new-look offense.

“They crack me up. How do I say this? They’re polar opposites, and then they’re the exact same person,” WKU offensive line coach Stephen Hamby said. “ ... One is a Mr. Jokester and the other one is, like, super serious, but don’t get them fooled – they’re the exact same human when it comes to football. Just one is more a quiet leader and the other one is a vocal leader.”

Spencer, a 6-foot-4, 295-pound Louisville native, has started since the team’s third game of 2019, and added a combined eight starts between 2017 and 2018. Brooks, a 6-6, 305-pound junior, started each game last year, appeared in all but one game his sophomore season and appeared in seven games his freshman year, splitting time at left tackle after Spencer went down with a season-ending injury.

With both seeing action from a young age and with differing styles, the two “butted heads” early on, according to Brooks.

During their time together at WKU, the tackles have learned more about each other, and in the offseason trained together in Brooks’ home state of Texas, which they credit to building their relationship further.

“We did some offseason training together this year, so we really worked on that relationship and put that together because we’re the two returning tackles so we know we need to be on the same page pretty much at all times,” Spencer said.

Brooks believes their differing approaches to the game can be beneficial to the line, which will have three new starters between him and Spencer when the team kicks off the season Sept. 2 against UT Martin at Houchens-Smith Stadium.

“Not only did we learn (in Texas), but I feel like me and Cole grew together as friends and kind of understood our differences and began to see eye to eye,” Brooks said. “Now as it translates on the field, I think it’s gotten to the point where we complement each other great.

“I think Cole can bring the stability of the leadership and just the maturity and kind of the stable ground that we need certain days, and certain days when the juice may not be out there, I’ll be hooting and hollering, yelling, cracking jokes, doing what I can to keep the juice up. I think when you have both those going at the same time on either side of the line, it can provide kind of a steady sort of flow of the O-line, which has been really, honestly, pretty nice.”

“It was really good to learn from those guys (last year),” Staats said. “They were all three great players and you can’t take anything away from them, but every single year you want to be better than the year before.”

WKU also added two pieces in the offseason via the transfer portal.

The Hilltoppers singed Boe Wilson, a 6-3, 300-pound graduate student that started 23 games from 2018-20 and appeared in 39 total contests in four years at Nebraska, seeing significant action at right guard.

WKU also added 6-3, 300-pound redshirt sophomore Cameron Stage from Bowling Green State, where Hamby coached the offensive line from 2016-18 before coming to WKU in 2019. Hamby was promoted to WKU’s offensive line coach following the 2020 season, but had Stage on an official visit while working at BGSU. Stage started BGSU’s five games at center in 2020 and appeared in four games at numerous positions along the line the year before.

WKU is working on installing a new offense under Zach Kittley. Hamby and Kittley both previously served on staff together at Texas Tech, and Hamby says the two have been in a group message together for the past five years, so they know how to work well together.

Kittley was behind Houston Baptist’s high-powered offense the last three seasons, which consisted largely of an aerial attack, but the staff has liked how WKU’s run game has looked so far. It’s a change from more of a ball control offense the Hilltoppers played in head coach Tyson Helton’s first two years with a solid defense behind it.

“Right now we’re not used to the fact that we’re put on islands in this offense, so now it’s trying to incorporate more heavy pass (protection) – we were a little bit more protected last year, a little bit more slide protection and we were never put out on an island like we are now, but because the quarterback has so much control and the center has so much control, now our tackles need to understand it’s going to be a one-on-one battle every single time,” Hamby said. “I like where we’re at right now. I just think we can get a lot better with that.”

WKU will conclude its spring session April 17 with a 1 p.m. spring game at Houchens-Smith Stadium.{&end}