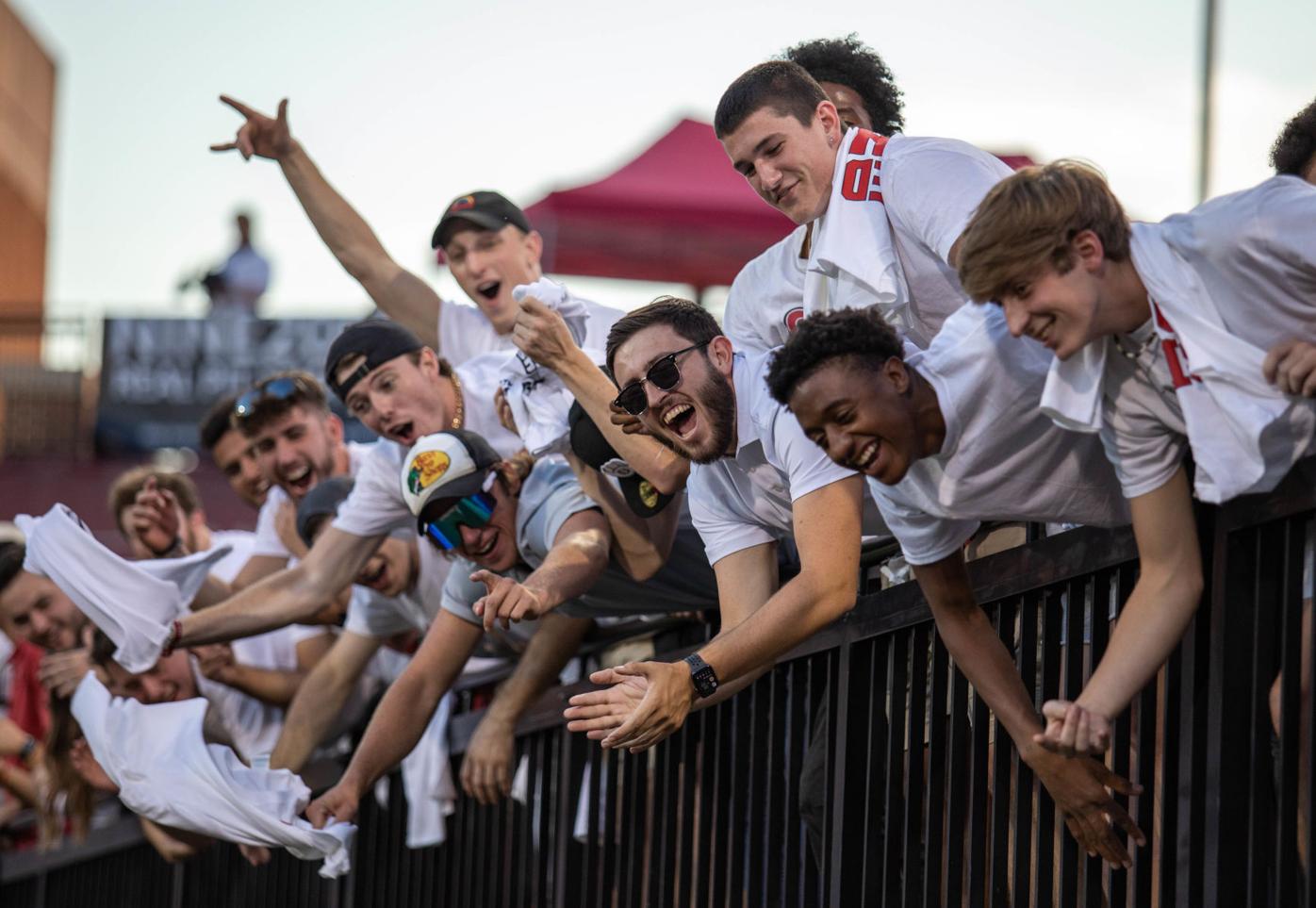 Western Kentucky students cheer for the Hilltoppers in WKU’s 59-21 win against UT Martin on Sept. 2 at Houchens-Smith Stadium. 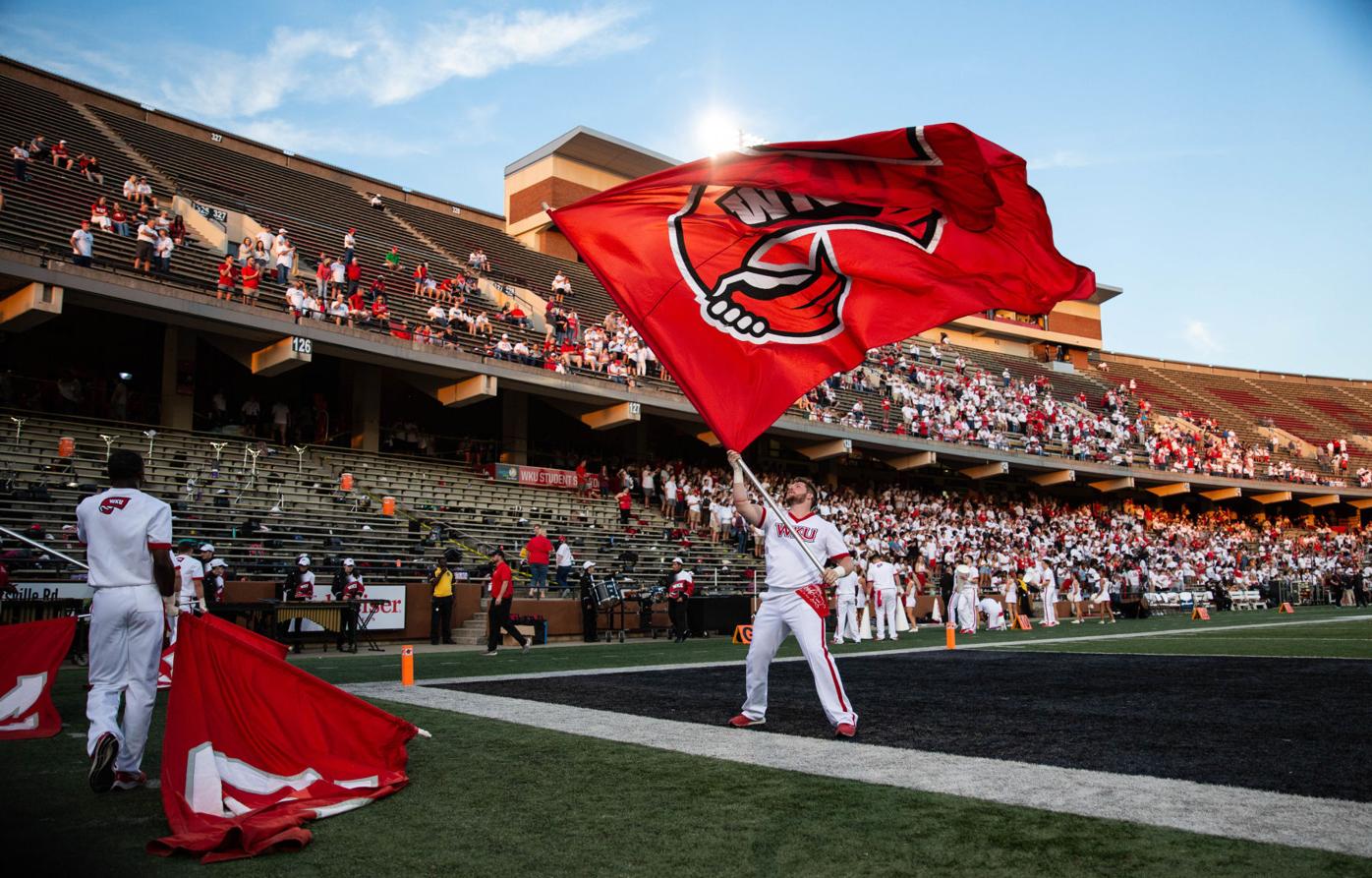 Western Kentucky cheerleaders fly the WKU flags at the start of the Hilltoppers' 59-21 win against the University of Tennessee Martin at Houchens-Smith Stadium on Thursday, Sept. 2, 2021. (Grace Ramey/photo@bgdailynews.com)

Western Kentucky students cheer for the Hilltoppers in WKU’s 59-21 win against UT Martin on Sept. 2 at Houchens-Smith Stadium.

Western Kentucky cheerleaders fly the WKU flags at the start of the Hilltoppers' 59-21 win against the University of Tennessee Martin at Houchens-Smith Stadium on Thursday, Sept. 2, 2021. (Grace Ramey/photo@bgdailynews.com)

The largest crowd in Houchens-Smith Stadium history came five years ago, when 23,674 people saw Western Kentucky fall to Vanderbilt in overtime on Sept. 24, 2016.

The Hilltoppers are expecting a similar crowd Saturday when they host Indiana in a 7 p.m. game.

“We have quite a few tickets out. We keep reflecting back to those Vanderbilt numbers and we’re a tad bit over,” said Olivia Higgins, WKU’s associate athletic director for marketing, promotions and ticket office. “Now it’s all in the hands of people showing up and it’s in the hands of students showing up, because you have to think there’s a lot of reserved sections for students, so they have to show up as well. We’re really, really close to all of those Vanderbilt numbers, so it’s looking really good.”

Higgins said Thursday morning WKU was “sitting under 2,000 tickets” for Saturday’s matchup. Season ticket sales are currently up about 10% from 2019 – a more comparable season than 2020, when capacity was limited due to the COVID-19 pandemic – and new season ticket holders are up more than ever, according to Higgins. She said WKU usually averages around 7,500 season tickets, and they’re in the deep-7,000s for this fall.

“I was here for Vanderbilt, I was here for all the conference championships, I’ve been here for a lot of different events here in The Houch, but I’m just excited for Saturday,” Higgins said. “It’s just a different kind of feeling. I’m a football girl, so when you come into a packed stadium and it gives me chills, I can only imagine what it gives coach (Tyson) Helton and what it gives those players for motivation to play great and to play really loud. I don’t think our fans can understand it enough, the ability they have for our players to play even better when they hear everyone in the background.”

Saturday’s game – which is being marketed as a “black out” with the team wearing black jerseys and fans encouraged to also wear black – will mark the third time WKU has hosted a Power Five opponent at Houchens-Smith Stadium. In addition to Vanderbilt, it also hosted Indiana in 2010. That game drew the seventh-largest crowd in stadium history with 20,772.

Saturday’s game is scheduled to begin at 7 p.m. and will be televised on CBS Sports Network. In addition to the game, Higgins said there will be pregame festivities on South Lawn which includes WKU’s Parent and Family Weekend, a car smashing activity and the Topper Tailgate show.

“We’ll have a lot of visitors on campus and it’s just such a great opportunity for exposure for WKU,” Higgins said. “Just really excited for this Saturday.”{&end}