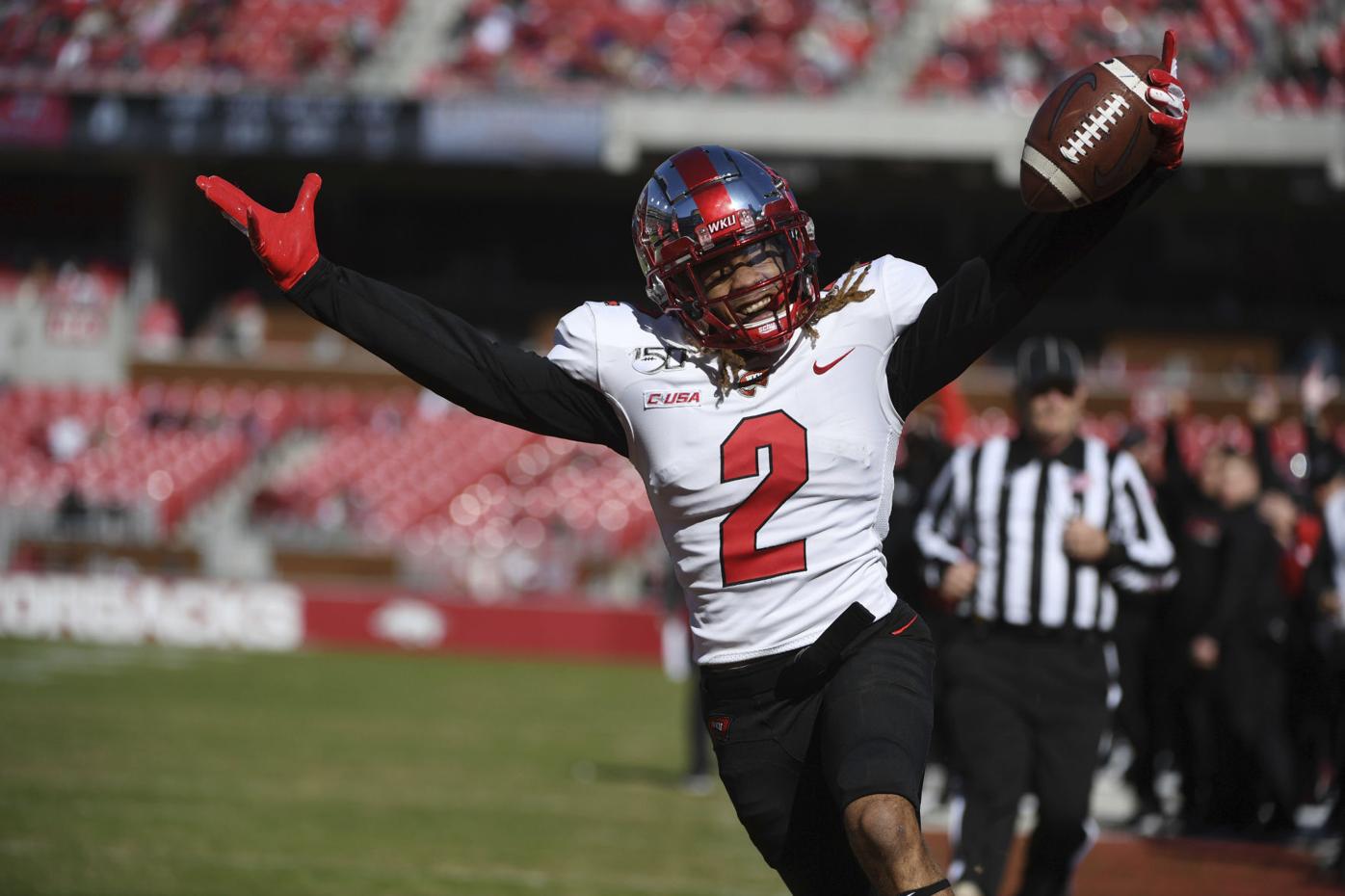 Western Kentucky receiver Jacquez Sloan celebrates as he scores a touchdown against Arkansas on Nov. 9 in Fayetteville, Ark. The Hilltoppers won 45-19. 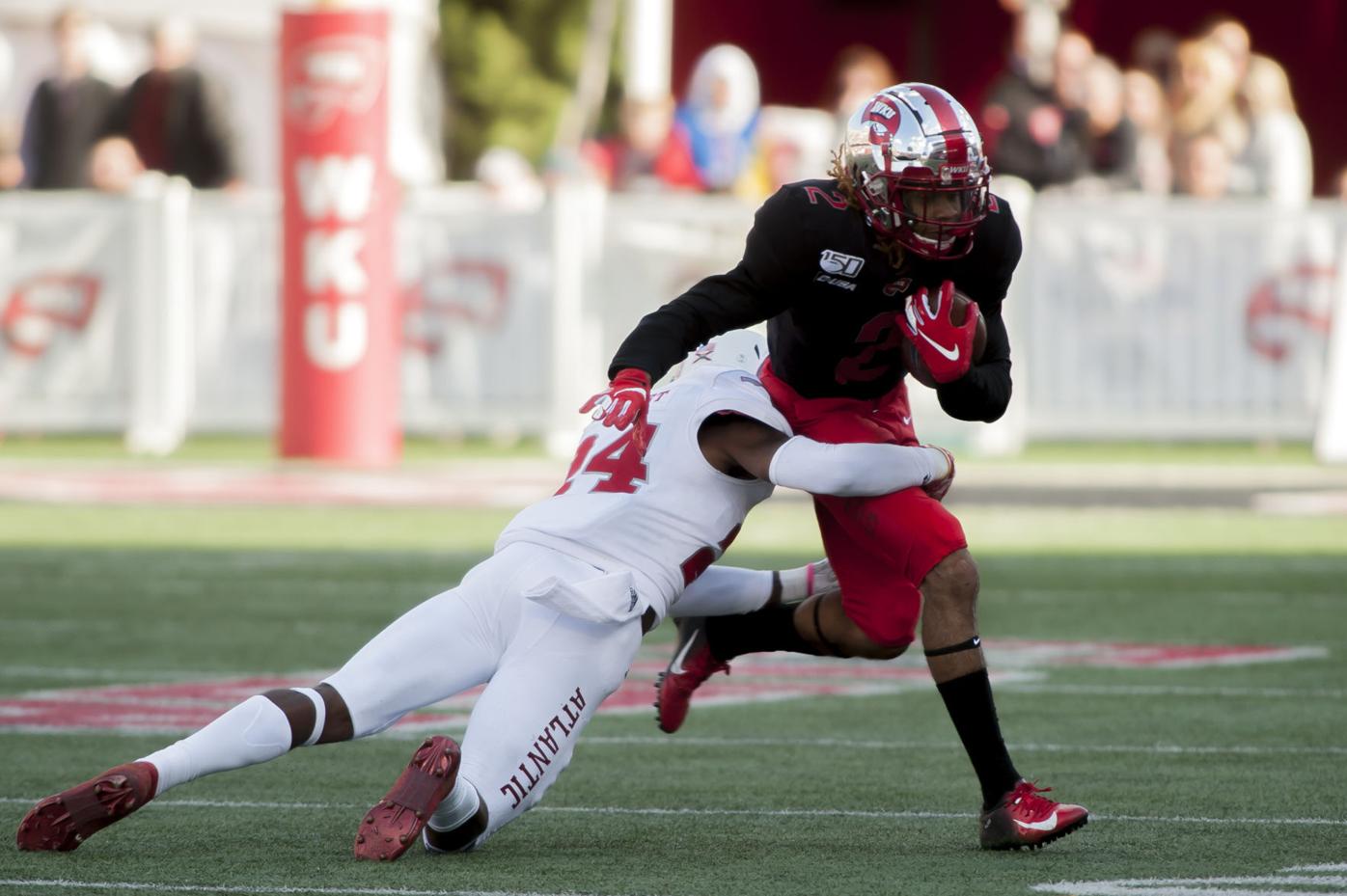 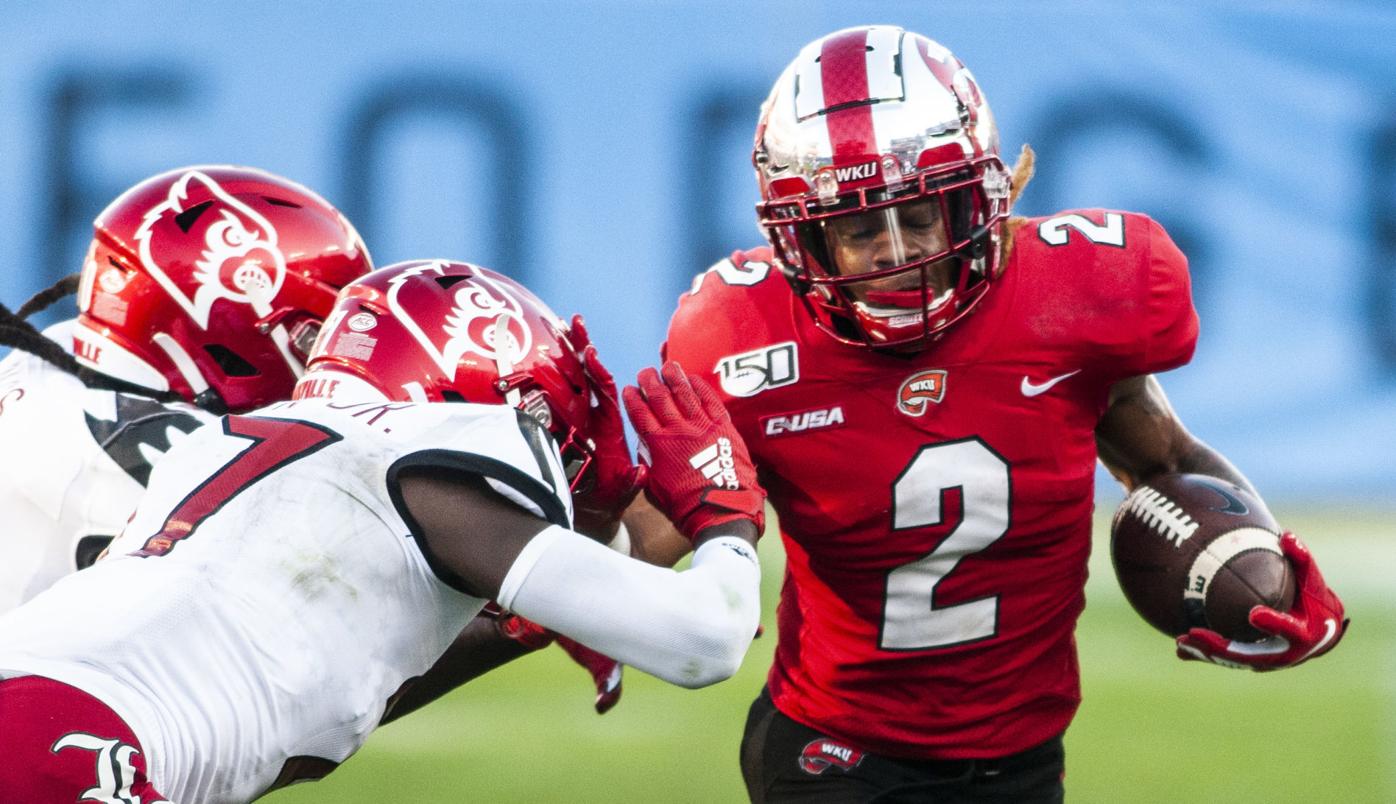 Western Kentucky wide receiver Jacquez Sloan (right) is pushed out of bounds by Louisville defensive back Anthony Johnson (center) during the Cardinals’ 38-21 win over WKU on Sept. 13 at Nissan Stadium in Nashville.

Western Kentucky receiver Jacquez Sloan celebrates as he scores a touchdown against Arkansas on Nov. 9 in Fayetteville, Ark. The Hilltoppers won 45-19.

Western Kentucky wide receiver Jacquez Sloan (right) is pushed out of bounds by Louisville defensive back Anthony Johnson (center) during the Cardinals’ 38-21 win over WKU on Sept. 13 at Nissan Stadium in Nashville.

The 5-foot-9, 165-pound Atlanta native, who was the second-leading returning receiver for the Hilltoppers, has entered the transfer portal and is no longer with the program, WKU confirmed to the Daily News on Tuesday.

247Sports was the first to report Sloan had entered the transfer portal.

“Too Excited To Start This New Journey,” Sloan tweeted at 8:57 a.m. Tuesday, with a laughing emoji.

Sloan followed the tweet with a farewell note at 4:44 p.m. with the caption “Thank You Western,” with a peace sign emoji.

“I Want To Thank WKU For The Opportunity To Further My Education & Play The Sport That I Love. To My Brothers I’ve Met Over These Past Years, Good Luck This Year, I Love Y’all Boys & I Will Miss Y’all The Most!!” he wrote in the note. “After Talking With My Family I Have Decided To Enter The Transfer Portal To Continue My Academics & Football Career. My Recruitment Is Now 100% Open!!”

Sloan had 297 yards receiving and one touchdown on 34 receptions last season. He finished the year with 628 all-purpose yards.

He appeared in nine games, starting six, as a sophomore in 2018 and posted 31 receptions for 495 yards, before suffering a season-ending injury in the second quarter at Middle Tennessee. Sloan had 12 receptions for 182 yards and two touchdowns his freshman season.

“You usually have 11 or 12 wideouts on scholarship and you’re going into game week and really five or six guys are going to get to play,” WKU offensive coordinator Byan Ellis said Tuesday. “When you’re clock’s running out kind of like his is, I think he felt like he needed to go somewhere that he would get to play a little more. We wish him the best.”

“I think we’ve got good depth at receiver and so that ball will get spread around pretty good,” he said. “I think we actually have more depth this year than we had last year, and so we’ve just got to be able to maximize that talent the best we can.”

WKU returns Jahcour Pearson, the second-leading receiver from last year behind Lucky Jackson. Pearson had 804 yards and seven touchdowns on 76 receptions. Sophomore tight end Josh Simon had 30 receptions for 430 yards and four touchdowns, and running back Gaej Walker had 24 receptions for 140 yards.

The staff said earlier in camp they had been impressed with Mitchell Tinsley and Craig Burt Jr., who come to WKU from Hutchinson Community College, as well as sophomore Dayton Wade. Ellis said Tuesday he expects those three, plus Pearson, redshirt senior Xavier Lane and redshirt sophomore Terez Traynor to be the main guys in Saturday’s season opener at Louisville, with redshirt freshman Jeremiah Fails and freshman Dakota Thomas sprinkled in.

“(Sloan’s) hard to replace,” Ellis said. “Obviously he’s had a lot of success here the last couple years. We wish him the best. I think we’ve got some good young players that might not be quite as proven yet, but I think are talented kids and I’m anxious watch those guys go out there and play on Saturday.”{&end}

VIDEO: Sloan to transfer from WKU

Bryan Ellis tells Western Kentucky’s offensive line every day during stretch that the offense goes as they go.