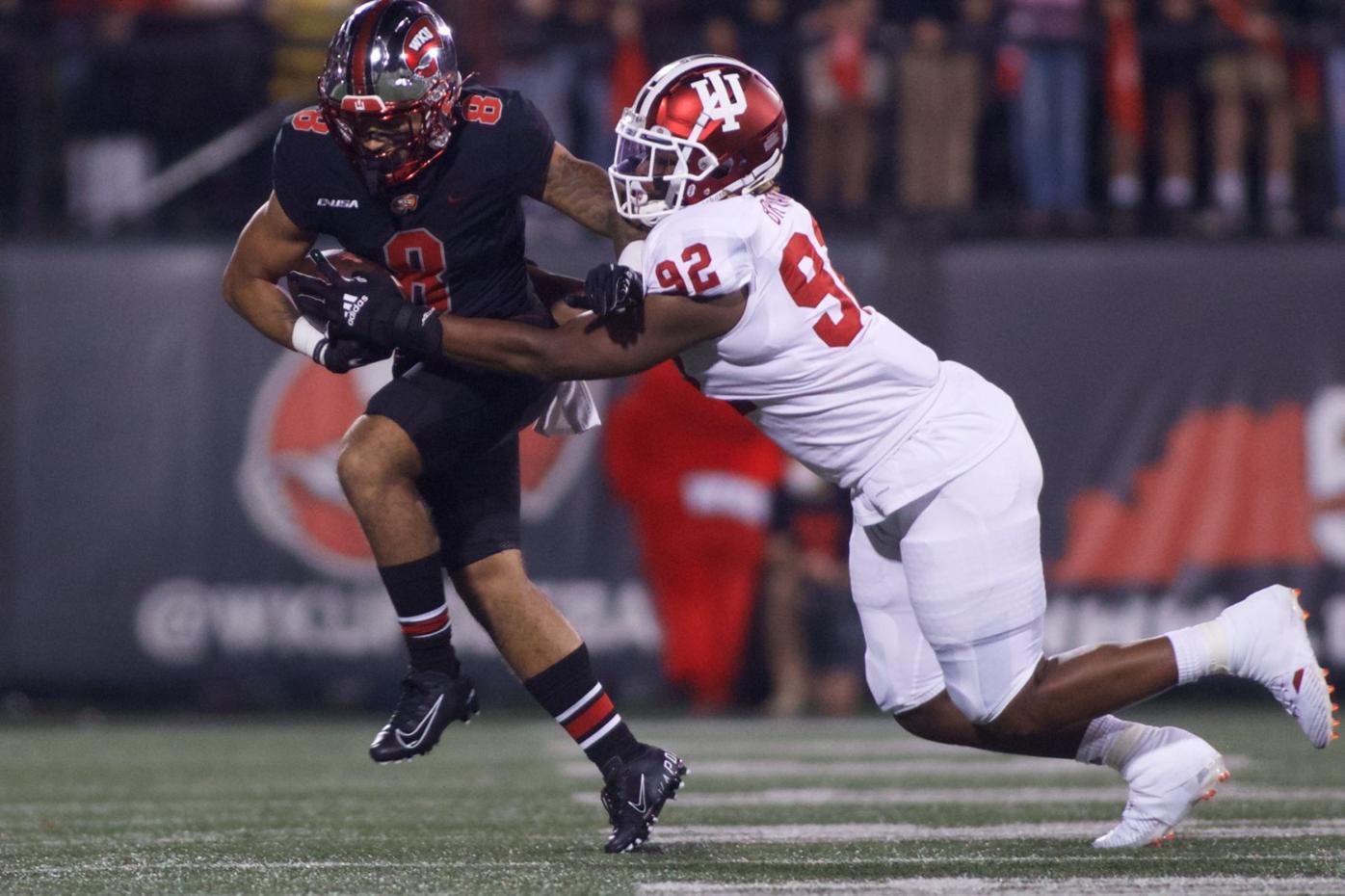 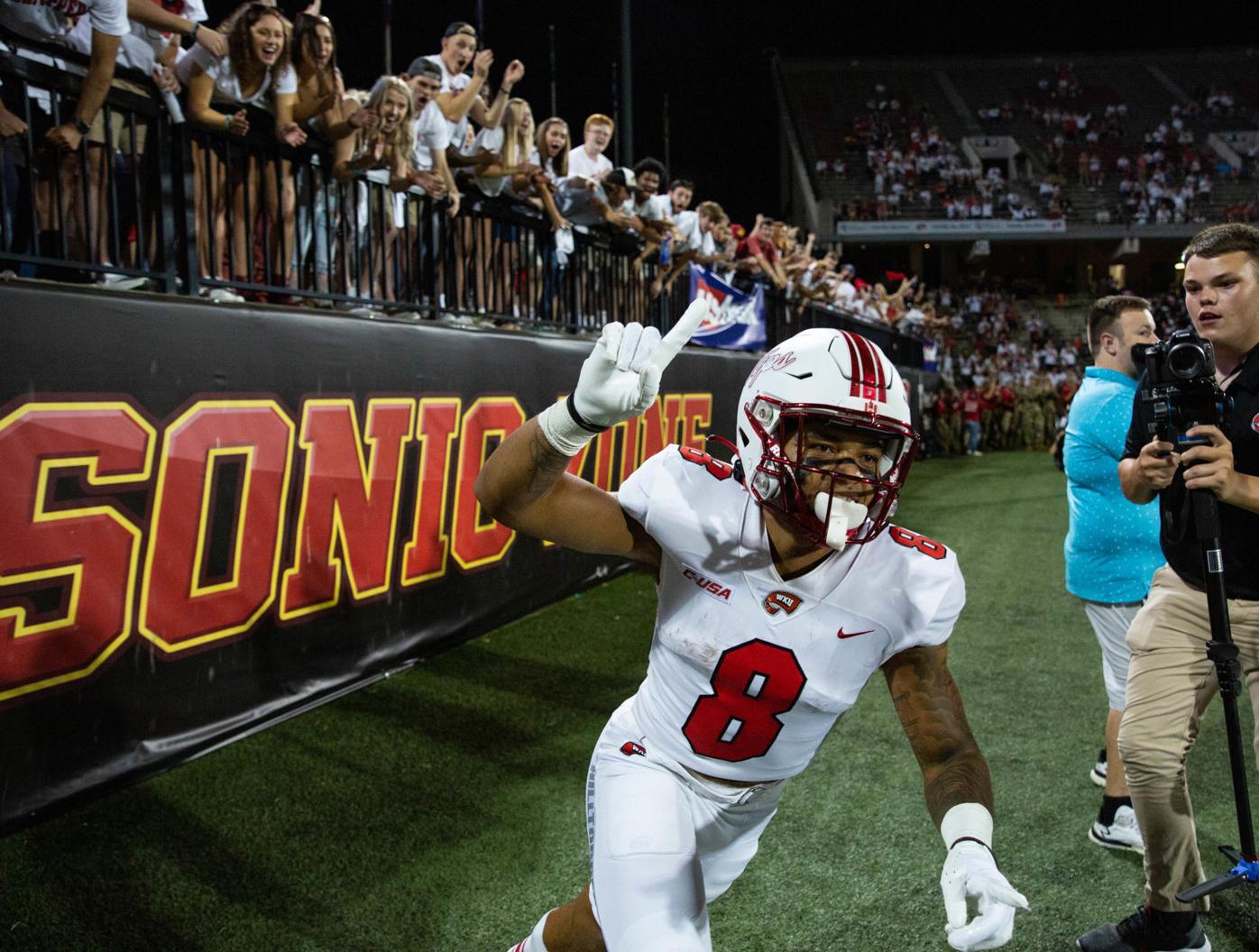 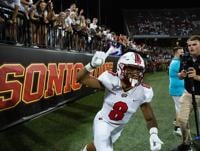 Western Kentucky wide receiver Jerreth Sterns celebrates after scoring a touchdown during the Hilltoppers’ 59-21 win against UT Martin on Sept. 2 at Houchens-Smith Stadium.

Western Kentucky wide receiver Jerreth Sterns celebrates after scoring a touchdown during the Hilltoppers’ 59-21 win against UT Martin on Sept. 2 at Houchens-Smith Stadium.

“My honest opinion is he’s the best receiver in the nation,” Zappe said. “He showed that today. He showed that the last three games. He’s a heck of a player and he deserves it. He works hard for it.”

At least statistically so far this season, it’s true.

WKU’s 5-foot-9, 195-pound junior receiver is leading the country in receptions and receiving yards per game heading into the Hilltoppers’ Conference USA opener against UTSA on Saturday at Houchens-Smith Stadium.

With Sterns, though, the praise quickly turns to everyone else, like his quarterback who currently leads the nation in passing yards per game with 428. WKU’s passing offense ranks first nationally at 441.5 yards per game.

“It means everything. That’s my guy,” Sterns said Wednesday when asked about Zappe’s postgame comment. “We trust each other with everything and I’ll say the same thing about him. I bet if you walk around this facility, this campus, if you ask anybody in Bowling Green they’ll say Bailey is the best in the nation.”

Sterns has caught 40 passes in four games for 546 yards and five touchdowns. He’s averaging 10 receptions and 136.5 yards receiving per game through the team’s 1-3 start, which included games at Army, against Indiana and at No. 17 Michigan State.

He came to WKU from Houston Baptist in the offseason with offensive coordinator Zach Kittley and Zappe, as well as fellow receivers Josh Sterns – his younger brother – and Ben Ratzlaff. At the FCS level with the Huskies, he had 220 receptions for 1,971 yards and 18 touchdowns in 27 games over three seasons.

“It’s just been a blessing,” Sterns said. “When I got here in the spring, I was kind of down on myself. I pulled my hamstring. I didn’t get to play spring ball. I was down. I didn’t really get to prove to the team and everybody else who I was, and I was new here, so they had just heard about me. There was a lot of hype about us coming in and they were like, ‘Oh, he’s soft,’ because I pulled my hamstring.

“I just kind of used the summer to get stronger, get faster, clean up the mental aspects of the game. Then fall camp I just grinded and we bonded really close with the receivers and the running backs, and I already had it with Bailey.”

Despite a tough spring, Sterns has lived up to the hype since moving up to the FBS level in WKU’s difficult nonconference schedule.

He followed with his best performance of the season last week, when he caught 17 passes for 186 yards and a touchdown. The 17 receptions tied the program record set by Lucky Jackson in the Hilltoppers’ 2019 SERVPRO First Responder Bowl victory over Western Michigan, and his 186 yards were tied for ninth-most by a player in program history. The receiving yards set a career high, but he did have 18 receptions in a 2019 game against Incarnate Word while at HBU.

“That all started with Mitch Tinsley,” Sterns said. “That all started with him taking the game over early and I think that just opened it up for me because when you have an outside receiver who’s able to do things like that, they kind of just forget about me and they start trying to cloud him, put a safety over the top of him and that allows me to just get open over the middle. The O-line did a great job of giving Bailey time and Bailey was just finding me a lot.”

Tinsley had career highs of seven receptions and 127 yards, with six catches and all 127 yards coming in the first half. It was the 12th time in WKU history a pair of players had over 100 yards receiving in the same game, with Jackson and tight end Joshua Simon’s First Responder Bowl performances in 2019 the last time it has happened.

“He deserves it, man,” Tinsley said after Wednesday’s practice. “He comes in and works hard. He’s humble. He’s not cocky at all. He does what he’s supposed to do. He helps others when he can and he definitely deserves everything he gets, man. If anybody deserves this, it would be him, for sure.”

With his performance so far this season, Sterns was added to the 2021 Biletnikoff Award Watch List on Wednesday – he says he found out the day before and called his mom right away “because none of this is possible without her.” The award annually recognizes the season’s outstanding FBS receiver in college football, regardless of position.

“I’ve got chills running down my back right now just talking about him. Man, he’s special – very special to me,” Kittley said Wednesday. “He was one of the very first people I got to recruit as the offensive coordinator at Houston Baptist, so I got to know him really well and his family.

“Man, no one deserves it more than him. Nobody comes to work every day, puts their head down, works hard – he is unquestionably probably the hardest-working guy on the football team, and if you ask anybody on the football team they’re going to tell you the same thing, and that’s why it’s so special. It means the world to me just being able to continue to be his coach because he’s a special human being on and off the field.”

WKU next plays UTSA to open the C-USA portion of its schedule. The Roadrunners enter undefeated and have the best scoring defense and total defense in the league, allowing just 17.6 points and 299 yards per game in their 5-0 start.

After his big game at Michigan State and his performances up to this point in the season, plus his history throughout his career with Zappe, he’ll surely be a big part of Saturday’s matchup, but Sterns isn’t as concerned about setting records or making watch lists as he is about going to 1-0 in league play.

“I’m sure if you ask him he’d take all 17 (receptions against Michigan State) away if we got the W,” Zappe said. “He don’t care about that. UTSA, if he gets one reception and we get a W, he’s going to be the happiest person in the world.”{&end}